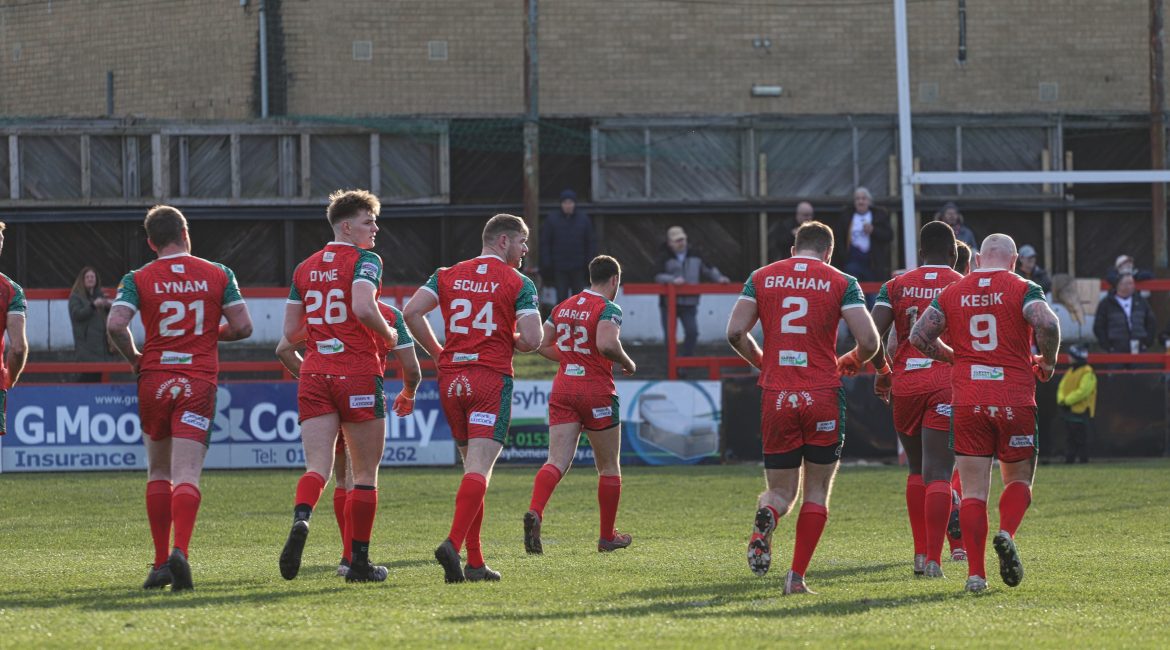 The Keighley Cougars were defeated 26-34 at home by Oldham RLFC in a friendly match at Cougar Park.

A bright start saw the home side take a 12-0 lead through tries from both halves, Jack Miller and Alix Stephenson.

However, the Roughyeds would fight back and level the scoreboard as Brad Jinks and Owen Restall crossed after periods of sustained pressure.

Keighley would have the advantage at the interval however, Charlie Graham the scorer with a diving in effort in the corner.

With Brenden Santi in the sin bin, Oldham made the most of the numbers advantage to score through Tommy Brierley.

A Josh Slingsby effort would restore the Cougars lead, but two quickfire tries in the corners from Brierley and Liam Copland moved the Roughyeds clear on the scoreboard.

The boot of Martyn Ridyard made the lead a bit more comfortable, however Aidan Scully powered through an attempted tackle set up a grandstand finish.

Ridyard though would prove the difference, as the final hooter sounded the veteran half turned through a challenge to squeeze over and seal victory for Oldham.

Despite a comprehensive win in the previous round, the Swinton Lions were eliminated from the Betfred Challenge Cup after a 14-20 home loss to the North Wales Crusaders.

The Lions got off to a horror start on the day, as Harry Swarbrick would score two tries in the games opening 15 minutes to open an eight-point lead for the Crusaders.

But a sinbinning for Chris Barratt gave Swinton a man advantage, and they made sure they only trailed by four points at the interval after Mike Butt got over in the left corner on the back of some superb link-up play in the build up to the try.

And within 90 seconds of the second half, the home side were level through captain Rhodri Lloyd as the Wales international powered went over near to the right-hand corner.

Swinton kept coming at the North Wales line, and after forcing three consecutive dropouts finally breached the visitors defence to take the lead for the first time in the game as Max Roberts forced his way over to score.

Crusaders though would level the scoreboard up once again with 10 minutes of the game left to play as Barratt amended for his earlier in sins by powering over from close range.

North Wales then forced a scrum, and Kieran Sherratt raced through a gap in the line to touch down and seal victory and progression for the Colwyn Bay outfit.

Head Coach Rhys Lovegrove has named a 21-man squad for the visit of the Swinton Lions.

Bradley Ho (Back) and Aaron Levy (Illness) are both available after their late withdrawals ahead of last Sunday’s loss to Oldham and are named in the squad.

Anesu Mudoti (Knee) and Anthony Dyne (Thumb) are ruled out through injury and join Billy Gaylor (Concussion) on the sidelines, however Myles Tate returned to training this week following his injury lay-off.

Dan Parker is suspended whilst Robert Matamosi is unavailable for selection.

Swinton Head Coach Allan Coleman has a named a 19-man squad as his side make the journey east from Greater Manchester.

Coleman has named all those available to him as they prepare for their third and final friendly ahead of their League 1 opener in a fortnight’s time against the West Wales Raiders.

The Lions will be without Liam Forsyth as he continues his return from injury and Will Hope, who retired from the sport to pursue a career in the fire service last month.

Lewis Charnock is ruled out through a suspension picked up in a friendly defeat to Salford in January.

KEIGHLEY COUGARS HEAD COACH RHYS LOVEGROVE: “We had to factor in that we wanted to play good-quality sides too, as we need that challenge to know where we’re at as a team.”

“We started 2021 slowly, and only won two of our first five league games, so I felt we needed good opposition in these friendlies to test and stretch ourselves.

“There’s no better way for us to do that than against the two sides who were relegated from last year’s Championship, and who’ll be fighting for promotion like us.

“Allan Coleman will have a different playing philosophy compared to Stuart Littler, so it’ll good to be presented with that different test.”

SWINTON LIONS CEO STEVE WILD: “We’re very optimistic about the season ahead. We felt that we were unlucky to get relegated, and I think that was largely to do with the horrendous injury list last year.

“We’ve retained the majority of our core squad and we’ve added to that squad.

We won’t be complacent, especially after losing unexpectedly to North Wales Crusaders in the Challenge Cup.

“That did disrupt our preparations to some extent because we were expecting further cup matches, hence the reason we’ve quickly organised this friendly against Keighley, in order to give the squad a good run out ahead of the first league game on the 27th of March.”

In fact, his first game in the semi-professional ranks was a pre-season friendly between ourselves and the Barrow Raiders in January 2018.

His last appointment to a Keighley match came last summer when he refereed our 34-22 home victory over the London Skolars in June.

Our last meeting with Swinton came in October 2015, when the Lions prevailed 29-28 in Widnes to win the play-off final and secure promotion into the Championship.

Swinton scored five first half-tries to take a 26-16 lead into the half-time interval.

Second half tries from Oliver Pursglove and Paul March sparked a Cougars comeback that resulted in the sides being level at 28 points apiece heading into the closing stages of the final.

However, a contentious drop goal that appeared to go wide by Chris Atkin would prove to the be the difference on the day as the Lions clinched the victory and with it promotion to the games second tier.

Tickets are priced at 10 for Adults, £8 for Concessions, and FREE for Under 16’s.