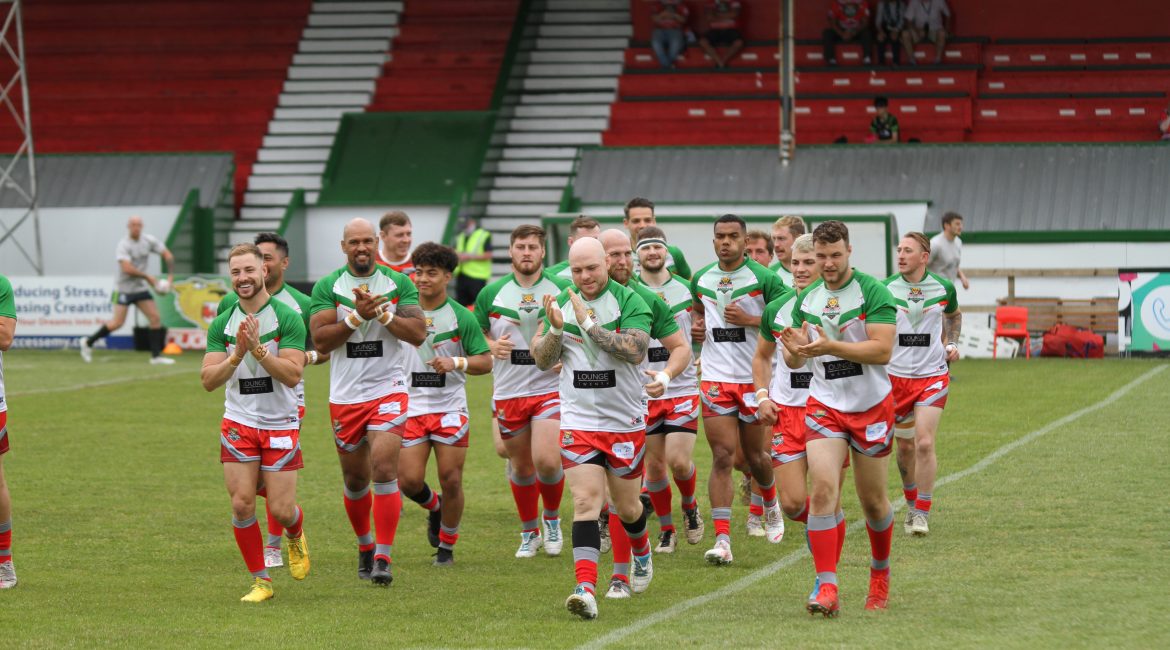 The Keighley Cougars returned to winning ways with a 70-12 home victory over bottom of the table West Wales Raiders.

Despite Covid disruption leading up to the game, the Cougars would run in 13 tries as they routed the foot of the table side from Llanelli.

The Cougars took a 34-0 within the first half hour with Jake Webster, Dan Parker, Taylor Prell, Jack Miller, Josh Slingsby and QLT.

West Wales did show some resilience and would cross for the next two scores with Jamie Murphy and Sam Herron both finding the line.

However, despite the visitors 12 points it would be all Keighley for the final half hour.

Prell scored his second before Parker would seal his hat-trick shortly after with two quickfire tries.

Ewan Badham was then sent off for the visitors, Moran sin-binned for the Cougars, but Aaron Levy crossed from the resulting penalty.

QLT then sealed his brace with Spencer Darley rounding off the scoring and the victory in the final minute of the game.

London Skolars pushed table topping Barrow Raiders all the way in the capital but were pipped as they were defeated 14-24 at the New River Stadium.

Despite the Raiders underperforming on the day, they had enough to see the win through against a resilient 12-man Skolars outfit.

After withstanding early London pressure, tries from Jake Carter and Luke Cresswell gave Barrow a 12-0 lead before Mike Greenhalgh was sent off for the hosts following a dangerous tackle.

The Raiders quickly score a third through Harry Swarbrick, but Charles Hammond crossed to make sure the Skolars had points on the board at half-time.

London made the most of a temporary leveller as with Adam Walne in the sinbin, Errol Carter scored in the corner to get the hosts back into the game.

Barrow would then seal the game as Tee Ritson intercepted a pass and raced 60 metres to dive over.

A late try through Lamont Bryan gave the Skolars the final say on the afternoon, but it was too late in the game to threaten a comeback.

Head Coach Rhys Lovegrove has only been able to name a 19-man squad as Covid-19 restrictions continue to hamper his squad.

Jake Webster, who was initially to be rested as a precautionary measure last weekend, returns along with Billy Gaylor (Shoulder) who is back in the fold following an injury lay-off.

Brenden Santi, Mo Agoro, and Alfie Seeley also return to the squad with Aidan Scully included for the first time this season.

All remaining players have been stood down or made unavailable by the Rugby Football League under the governing bodies Covid-19 protocols.

Mo Agoro is expected to make his 150th career appearance.

There are four changes made from last weekend’s home defeat at the hands of the Barrow Raiders.

Coming into the side in their place are Jamaica internationals Omari Caro and Greg Johnson, Dalton Grant, and Christian Gale, come into the squad their places.

Lameck Juma is available as his three game suspension does not begin until next weekend whilst Mike Greenhalgh has avoided any further punishment following his dismissal in last Saturday’s loss to Barrow.

Neil Thorman is expected to make his 100th career appearance for the club.

KEIGHLEY COUGARS HEAD COACH RHYS LOVEGROVE: “We pretty much had our best side out against Doncaster, but then we’ve had little niggles ahead of or in games.

“We’ve worked hard in these first six games and tried to go in all singing and dancing to get wins.

“We’ve not been up to standard in some, but we’ve not had the personnel either and you need both, which is maybe why we’ve only won three games so far.

“We need consistency, so as long as everyone who is still available for selection is fit for the weekend and performs, it’s going to be a difficult rotate.”

This is the first meeting between the two sides in two years since the Cougars defeated the Skolars in June 2019 at Cougar Park to wipe out their twelve-point deduction.

The game now known as the ‘Plus One Party’ marked Rhys Lovegrove’s first win as Head Coach following his appointment earlier that month as the Cougars recorded a 38-26 victory in front of the OuRLeague cameras.

A penalty conversion from Neil Thorman gave the Skolars an early lead, but the remainder of the first half would be dominated by the Cougars.

Jordan Parry dived over in the corner before the home side gained a man advantage as Robert Tuliatu was sent to the sinbin.

And they made the most of the advantage as both Jason Muranka and Jordan Aitchison found a way over the line to extend the lead further.

Jack Miller would be the next man to score for the Cougars, but Iliess Macani registered a try for the Skolars as the half-time hooter sounded.

Macani powered his way over for the second after the interval, but two quickfire tries from Ryan Wright and James Feather put the home side out of sight in the contest.

The final two tries of the afternoon went to the visitors as Liam Scott and Mike Bishay crossed for Jermaine Coleman’s outfit, either side of a Cougars penalty conversion from Benn Hardcastle on an afternoon that belonged to the home side.