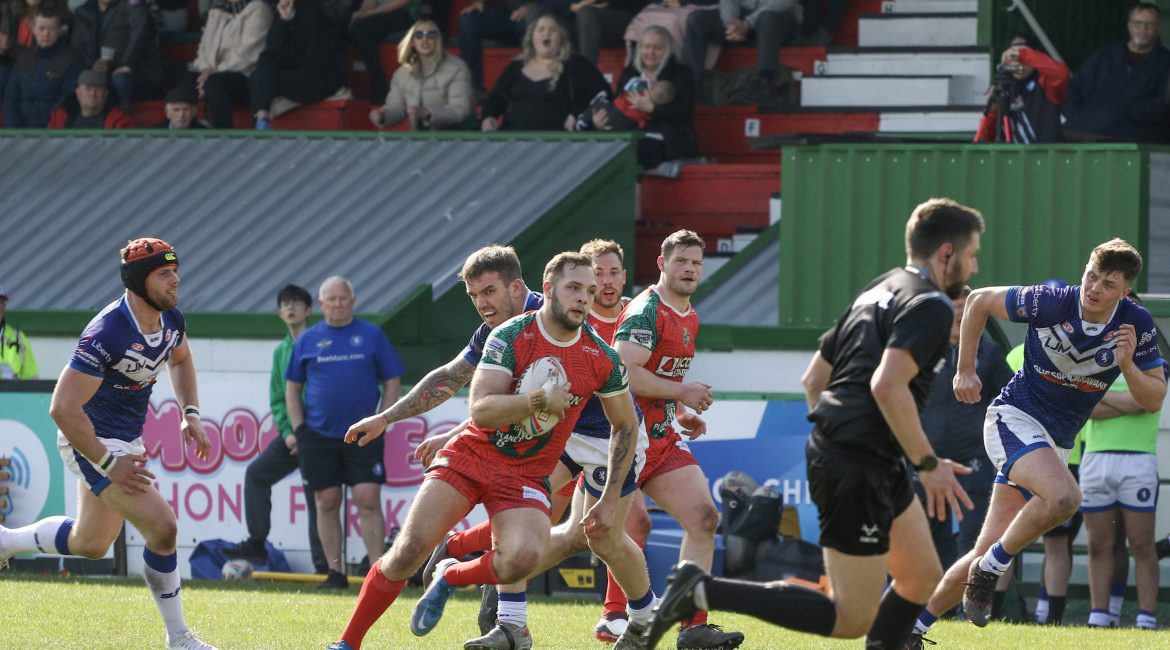 The Keighley Cougars continued their unbeaten start to the season in style, demolishing promotion rivals Swinton Lions 30-0 at Cougar Park.

A penalty conversion from Jack Miller in just the second minute of the game opened the scoring and the Cougars never looked back from that point onwards.

Dan Abram and Mike Butt would get caught out from a Scott Murrell kick to the corner, Lewis Young the quickest to react and touch down the loose ball.

And the lead would extend further, as the Cougars went the length from the restart and Jack Miller turned through a tackle to force his way to the line.

Shortly before half-time, Keighley would further add to their advantage as Mo Agoro went racing over from a scrum play.

Nick Gregson would be sin-binned for the Lions, and whilst he was off the field Charlie Graham stepped inside to leave four defenders for dead and race over.

Agoro dived over in the corner for his second of the afternoon for the games final score with the Lions again reduced to twelve shortly before full-time as Deane Meadows was binned for a professional foul.

London Skolars are still searching for their first win of the League 1 season as they went down to a battling 22-56 home loss at the hands of the Rochdale Hornets.

Skolars skipper Aaron Small touched down his own grubber to give his side an early lead, but the Hornets responded with four tries.

Ben Calland and Tom Ashton turned the scoreboard around before quickfire tries from Gregg McNally and Fuifui Moimoi gave the Hornets the advantage.

Small though would score a second, but his side couldn’t hold out until half-time as Ashton would find a way over for his own second.

Although, London started the second half brightly as Leighton Ball scored to make it a two-score game.

But once more Rochdale had too much and pulled away from the hosts with Gavin Bennion scoring before Ashton completed his hat-trick.

A second score from Ball kept the faint London hopes alive but Ben O’Keefe, Lewis Sheridan, and Callum Marriott would all touch down in the games closing moments to make the scoreboard a comfortable one for Matt Calland’s team.

Head Coach Rhys Lovegrove has made two enforced changes to his 21-man squad from last week’s victory over Swinton.

Spencer Darley and Rory Nettleton are both illegible for selection as they feature for the Bradford reserves this evening and are replaced in the squad by Anthony Dyne and Myles Tate.

Dan Parker is available for selection as his two-match suspension does not begin until Tuesday.

Josh Lynam (Knee) is the only injury absentee for the Cougars.

London Skolars Head Coach Joe Mbu has made six changes to the squad that fell to defeat at the hands of Rochdale last time out.

Chris Ball is named for the first time since joining the club in the off-season from Sheffield and is joined in the 21-man squad by Errol Carter, Connor Flanagan, Christian Gale, Kojo Korang, and Jerome Yates.

Judd Greenhalgh and Adam Vrahnos, who were both on dual registration from the London Broncos, do not make the trip north to West Yorkshire and neither does Harry Kaufman, Liam O’Callaghan, Reece Rance and Aston Stephenson.

However, another pair of Broncos players on dual registration to the Skolars, Max Allen and Will Ramsey, will feature at Cougar Park this weekend.

KEIGHLEY COUGARS HEAD COACH RHYS LOVEGROVE: “The first quarter of the season was about our defence and being able to manipulate where the opposition has the ball whilst applying the intensity and pressure that we as a team wanted to set.

“I felt we did that really well against Swinton and showed glimpses of what are capable of going forward in attack.

“We are still developing and getting better as a team, I genuinely do still believe that we can be a lot better than we have been over the first four games.

“The players are really working hard and I’m excited to see their individual progressions, because I believe they can still improve and that will be the real test now.”

His last appointment to a Keighley match came in September of last year when he oversaw the Cougars dramatic 28-26 comeback victory away at Doncaster in the final round of the Betfred League 1 regular season.

Keighley Cougars won a second consecutive game on the road back in August as they grinded out a 14-34 victory away at the London Skolars.

The Cougars started the game brightest and broke the deadlock through a try from Aaron Levy.

The Skolars though would reply with ten unanswered points through a try from Jerome Yates and three conversions, two of which were penalties, from the boot of Neil Thorman.

However, the sinbinning of Jacob Ogden would turn the game as the Cougars finished the first with three unanswered tries.

Matthew Bailey reacted quickest to a dropped kick before two chips over the top from Kyle Kesik were touched down by Jack Arnold, his only try for the club, and Taylor Prell.

The Cougars began the second half in similar vein as Ryan Wright burrowed his way over from dummy half.

Prell then scored his second of the afternoon, crossing in the corner on the back of great link up play between James Feather and Dan Parker.

The Skolars would register the final points of the game as Paulos Latu forced his way over, but they finished the game a man down as Mike Greenhalgh was sent to the bin for punching.

This Sunday’s game is our #PackThePark fixture with supporters able to buy two adult tickets, two concessions tickets, or one of each, for just £20!

And with under-16’s going FREE as always then why not treat the family to a day out this bank holiday weekend?