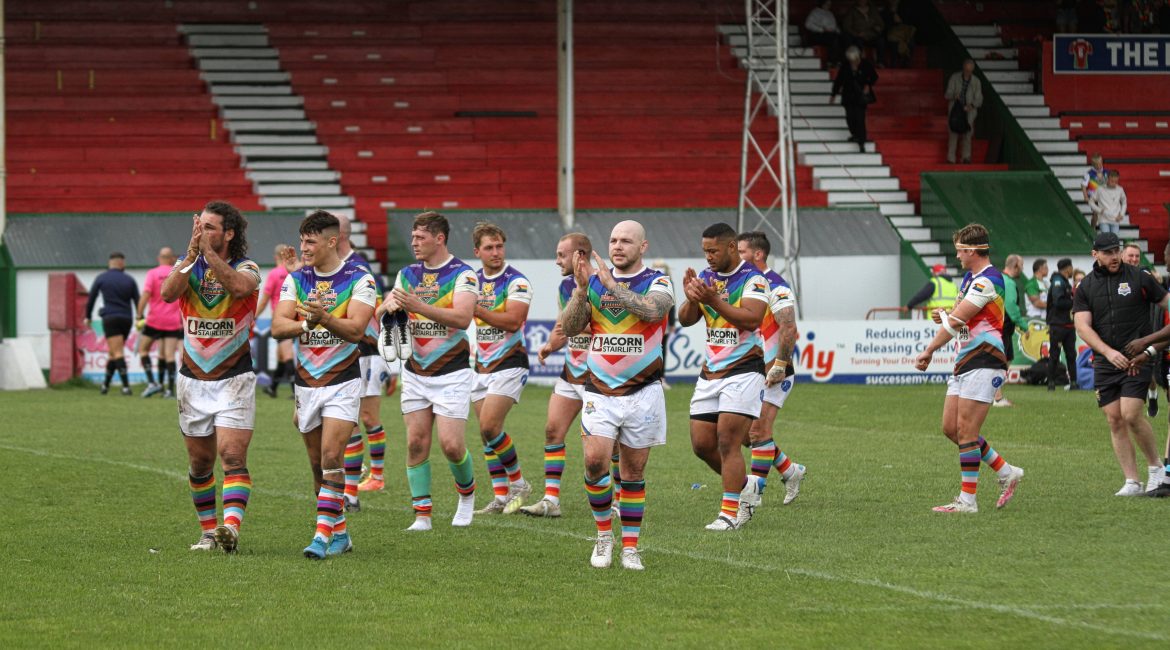 Keighley Cougars blistering first-half performance set them on their way to a 46-18 victory over the Coventry Bears in the annual Cougar Pride game.

The Cougars got off to a blistering start in front of the 1028 crowd as Charlie Graham opened the scoring after just 28 seconds before Dan Parker touched down a Jack Miller grubber in the 4th minute.

The onslaught in the opening quarter of the game continued as Mo Agoro scored on the back of a superb Taylor Prell offload, before Parker crashed his way over from close range for his second of the contest.

Agoro then scored his second, breaking down the field to touch down from 90 metres, but Coventry responded with their first score through Hayden Freeman.

It was brief rest bite for the visitors as Agoro completed his hat-trick from a long pass over the top from Billy Gaylor.

Jack Miller added his name to the Cougars scoresheet as he forced his way over, but the Bears scored on half-time as Dan Coates touched down from a Reece Rance grubber.

The second half was a dull affair compared to the first, the Bears scoring early in the half through Brad Clavering.

Taylor Prell was placed in the sinbin, but the man disadvantage didn’t go against the Cougars as Ryan Wright scored with two minutes left on the clock to put cherry on the top.

It was also a loss in West Yorkshire last time out for the London Skolars, as they fell to a 38-10 defeat away at Hunslet RL.

The Skolars had a nightmare start in south Leeds as went into the half-time break twenty points behind.

Wayne Reittie, Matty Chrimes, and Duane Straugheir tries, and a penalty conversion from Jy-Mel Coleman had Hunslet cruising at the interval.

London would half the deficit though early in the second half as Lamont Bryan and Lameck Juma both crossed inside the first ten minutes of the restart.

However, Hunslet then got back on the front foot and scored again through Coleman.

Frazer Morris was then sin-binned for the home side, but the man disadvantage didn’t stop them as Lewis Young sidestepped through to dive over.

The visitors were temporarily reduced to 12-men themselves and Hunslet rounded off their victory with a score from Jordan Andrade.

Head Coach Rhys Lovegrove has made five changes from the squad that defeated the Coventry Bears last weekend.

Jack Coventry returns following a two-week injury lay-off with Robert Matamosi, Alix Stephenson, and Spencer Darley all recalled to the side.

Scott Murrell (Ankle) and Mo Agoro (Groin) are both ruled out through injury, with Con Mika (Ankle) left out of the side as a precautionary measure.

Kieran Moran and Ben Stead both drop out of the side with Jake Webster another week off returning.

James Feather will equal Phil Stephenson’s appearance record should he play at the New River Stadium.

London Skolars Player-Coach Jermaine Coleman has named a 20-man squad for the visit of the Cougars.

Jacob Ogden, Jonah Varela, and Jordan Williams all go straight into the Skolars side after arriving on loan from the London Broncos earlier this week.

Coleman himself is side lined, as are Lameck Juma and Max Clarke who both miss out having both played in last weekend’s loss at Hunslet.

Jacob Thomas and Kameron Pearce-Paul are both ruled out through suspensions given to them by the RFL disciplinary panel.

There is also a familiar face in the Skolars ranks for Cougars supporters as Matt Ross is named in the squad.

Neil Thorman requires 10 points to reach 500 points for the club.

KEIGHLEY COUGARS HEAD COACH RHYS LOVEGROVE: “The fixtures are coming thick and fast now, and if you catch any team on their day then you’ll be in for a tough afternoon.

“London, and West Wales too, have both hit a decent patch of form and but some great performances in so we need to be on our guard and make sure we don’t let our standards slip.

“Skolars away is always a nightmare of a fixture because they have the 3G pitch which means that the ball can go anywhere and they’re a really big athletic team as they showed when they came to Cougar Park.

“They play a really expansive and off the cuff style of Rugby League which incorporates all the variables of the ball.

“It is a really tough fixture is this one so we need to keep those performances consistent and keep those wins coming.”

A Keighley Cougars side ravaged by a Covid-19 outbreak the week previous put on a battling performance to defeat the London Skolars 34-22 at Cougar Park.

The Skolars opened the scoring on the day as Tom Firth crossed, but this lit a fire under the depleted Keighley side.

Josh Slingsby levelled the scoreboard as he dived home in the corner, before QLT walked the ball home under the crossbar on the back of excellent work from Dan Parker and Scott Murrell.

London would retake the lead as Lameck Juma scored, but a show and go from a quick tap allowed Jack Miller in to make sure the Cougars had the advantage heading into half-time.

The second half would see Skolars ill-discipline allowing the home side to pull away in the game, Miller converting a penalty goal to create some breathing space.

Brenden Santi then forced his way over for a try before Miller took the two once more on the back of another penalty.

Santi scored his second, but London threatened a comeback with two quickfire tries through Dalton Grant and Juma.

However, Miller converted a third penalty kick after Mike Greenhalgh was sin-binned for a dangerous tackle.

Tickets are still on sale for Saturday’s game as the Cougars make the journey south to the capital to face London Skolars.

You can still purchase a ticket in advance of attending the New River Stadium via the London Skolars official ticketing website, with the club looking to receive confirmation that there will be a pay on the day option at the gate upon arrival at the ground.