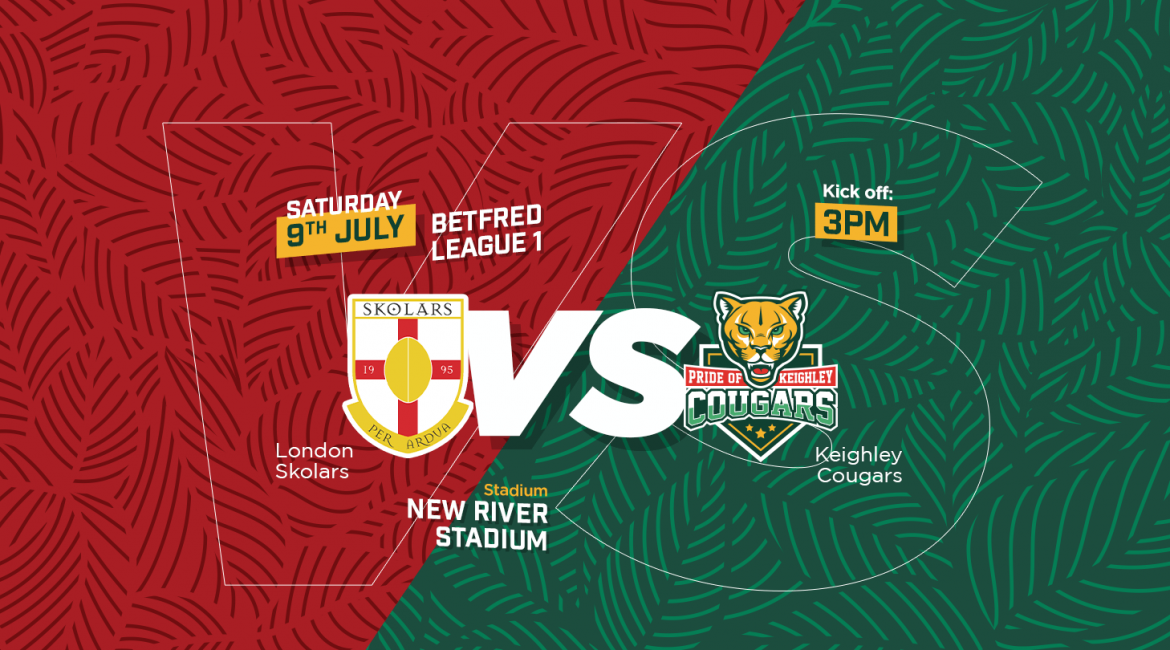 The Keighley Cougars extended their winning streak to 12 matches with an 86-0 win over the West Wales Raiders at Cougar Park.

Tries in the games early stages from Jack Miller and Nathan Roebuck set the Cougars on their way to another comprehensive victory.

Four further scores followed before the half-time interval as Mo Agoro, Dane Chisholm, Jake Webster, and Lewis Young, all would touch down.

The second half was even more of an onslaught as Keighley ran in 54 further unanswered points.

Charlie Graham then secured his own brace of tries, scoring two in two minutes, with Agoro completing his hat-trick as the rainbow warriors kept coming at the Raiders.

Aaron Levy was next to score two tries, his efforts coming either side of Agoro’s fourth of a productive afternoon.

The rout was completed by Roebuck, the centre walking the ball home to seal a pair of tries of his own.

Despite a battling performance, the London Skolars would go down 30-16 away at the North Wales Crusaders.

The Skolars would open the lead on the afternoon as Jarred Bassett raced onto a grubber kick from Phil Lyon.

Crusaders would quickly get back level through as Harry Swarbrick scored down the right edge on the back of a penalty.

The pendulum again swung the way of London as Bassett broke the defensive line and raced 40 metres to touch down.

North Wales would be the side though in the lead at half-time as first Pat Ah Van scored with a further try coming soon after through Scott Turner.

Early in the second half, the Skolars would level up the scoreboard with Lameck Juma the quickest to a chip over the top.

However, Rob Massam touched down before a penalty conversion and try from Tommy Johnson late on saw the Crusaders over the line for a much needed return to winning ways.

New signing Kyle Trout is named following his arrival late last week with Josh Lynam (Hand) returning from injury and Anthony Dyne included for the first time since early May.

Bradley Ho (Calf) is ruled out through injury whilst Jake Webster is unavailable for selection this weekend.

Dane Chisholm serves the first of a two-match suspension.

London Skolars Head Coach Joe Mbu makes two changes from the side that was defeated in Colwyn Bay last time out.

Rob Tuliatu and Adam Vrahnos both come in on dual registration from the London Broncos.

This means three Broncos will be in the squad, with Neil Thorman also featuring on dual registration terms.

Ryan Cane, who has joined the West Wales Raiders on loan, drops out of the squad along with Kojo Korang.

KEIGHLEY COUGARS HEAD COACH RHYS LOVEGROVE: “This game is huge, the Skolars are a very different animal to what we faced back in May.

“They’ve recruited strongly since that fixture and are a really strong, fast, and very athletic, team.

“They play a really direct brand of Rugby League and create plenty of opportunities on the back of that.

“There’s plenty of adversity for us to face in this fixture.

“First the travel to London, but then we’ve got to be switched on to make sure we execute some good footy on the surface at the New River.”

This weekend’s referee is 19-year-old Matty Lynn from Stockon-on-Tees.

A member of the North East Referee’s Society, Matty’s Rugby League journey began as a player in the academy system at the Newcastle Thunder.

Moving into officiating, Lynn would take charge of his first National Conference League match at the age of just 16.

From there, he would move up the division’s in the NCL whilst also beginning touch judge and fourth official duties in the Betfred Championship and League One.

Lynn’s performances would see him recently promoted to the Grade 1 officials list and this Saturday’s fixture will be the first professional game in which the young referee has been the man in the middle.

Everyone at the Cougars would like to congratulate Matt on his first professional game appointment and wish him the very best for Saturday’s game at the New River Stadium.

He will be assisted by touch judges James Collins (Leicester) and Mackenzie Maddison (St Helens). The reserve referee for this fixture is Matt Rossleigh (London).

The Keighley Cougars maintained their 100% start to the new season with a comprehensive 96-0 home victory over the London Skolars.

The Cougars ran in 17 tries on the afternoon with Jack Miller contributing from the boot with 14 conversions.

The game as a contest was over inside the first 13 minutes as two tries from Mo Agoro, and further scores from Lewis Young and James Feather saw Keighley race into a 22-0 lead.

Further scores would follow as Miller, Jake Webster, Nathan Roebuck, and Charlie Graham all touched down to send the home side into the sheds with a 46-0 lead.

The second half would see the onslaught continue Agoro scored a third, and Young a second, inside the opening ten minutes of the half.

Graham sealed his brace, with Dan Parker and Billy Gaylor also getting in on the act before Agoro dived over in the corner for a fourth.

Kyle Kesik raced over for his first of the season with Parker and Roebuck both finding time to score their respective second tries to wrap up a record-breaking afternoon at Cougar Park.

Advanced tickets for Saturday’s game in the capital are on sale NOW.