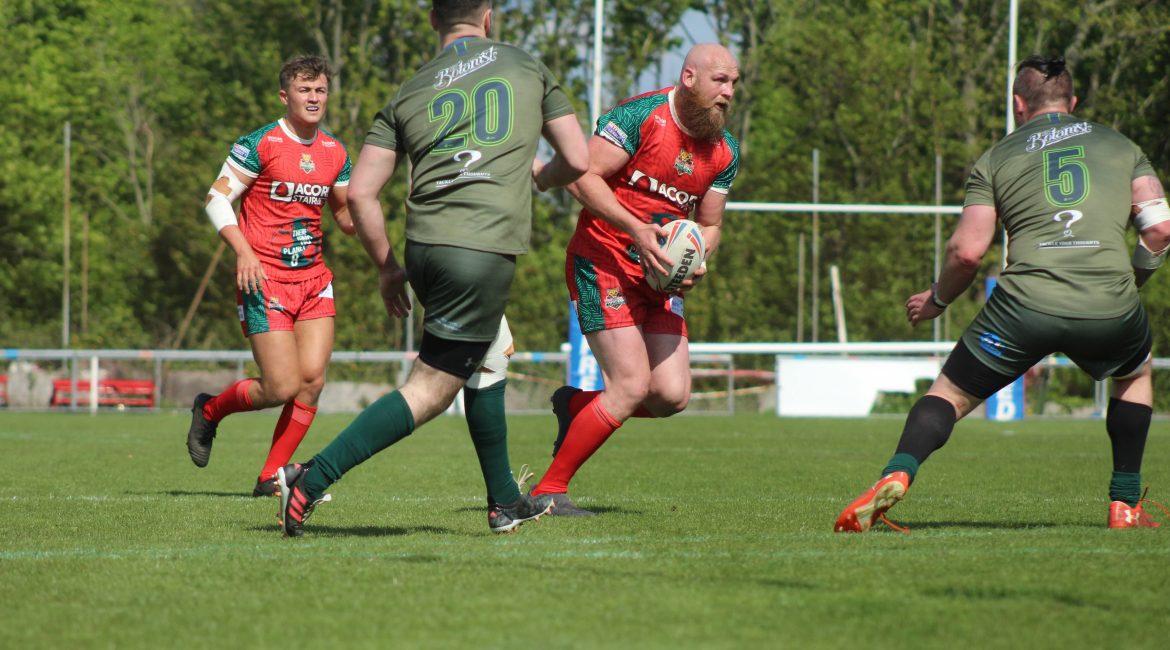 Keighley Cougars maintained their 100% start to the new league season with a 4-46 win away at the West Wales Raiders.

In a game surrounded by controversy, the Cougars put in a professional performance to ensure they made the long journey home victorious.

Keighley extended their lead further with another two tries courtesy of Jack Miller and James Feather.

And shortly before half-time, Nathan Roebuck would touch down behind the posts after an outstanding short ball from the debuting Dane Chisholm.

Chisholm then took the game by the scruff of the neck in the second half, first engaging the left edge to present Alix Stephenson with a walk-in at the corner.

A deft kick to the corner then allowed Agoro to pounce for his second with Miller sealing a brace shortly after as he raced in at the corner from the scrum.

Then, despite being a metre short of the line and knocking-on, referee James Jones awarded a West Wales try to Callum Merrett much to the bemusement of all in attendance.

This riled the Cougars however, and they turned the screw once more as Miller sealed his hat-trick before Charlie Graham rounded off the scoring.

The Rochdale Hornets recorded a sixth consecutive victory, as they defeated a determined Midlands Hurricanes side 44-24 at Spotland.

The Hornets scored two early tries through Cobi Green and Cian Tyrer, but the Hurricanes quickly levelled the scoreboard with two scores of their own courtesy of Kieron Lawton and Jordan Bull.

Dan Nixon would put Rochdale back in front, but the visitors again levelled to go into the break even as Benn Hardcastle touched down.

However, a fast start to the second half would set Matt Calland’s side on their way to victory.

Paul Brearley touched down a Sean Penkywicz grubber before Fuifui Moimoi powered his way over from close range.

But Midlands wouldn’t go down without a fight and reduced the deficit through captain Liam Welham.

This time though, Rochdale were not prepared to squander their lead and Gavin Bennion found a way over the line.

Tyrer would then score his second try on the back of some great work from Gregg McNally before the full-back would get a try from himself with two minutes left on the clock.

Jake Webster and Scott Murrell, who were both rested last week, come back into the side as does Taylor Prell.

Anesu Mudoti is also named in a squad for the first time since January following two injury lay-offs.

Keenan Dyer Dixon, who joined West Wales on loan this week, drops out with Chris Cullimore whilst Anthony Dyne (Foot) and Rory Nettleton (Ankle) are both ruled out through injury.

Rochdale Hornets Head Coach Matt Calland has made three changes from the squad that saw off the Midlands Hurricanes.

The clubs three new signings, Jy Hitchcox, Rob Worrincy, and Phoenix Laulu-Togaga’e, all come straight into the Hornets side.

Zac Baker, like Dan Parker for Keighley, is ruled out through suspension.

KEIGHLEY COUGARS HEAD COACH RHYS LOVEGROVE: “Rochdale like ourselves have started the season impressively and have recorded six wins, it promises to be another entertaining afternoon of Rugby League.

“The Hornets are playing some fantastic Rugby League at the moment and Sunday’s match will be a huge challenge for us.

“We will have to compete and be prepared for some adversity as this is an opponent who will create plenty of chances to score against us.

And I’m also looking forward to being back playing at home as we’ve spent this week building towards a huge fixture on the back of a long trip to defeat the West Wales Raiders last weekend.”

This Sunday’s game will be officiated by 21-year-old Liam Rush of the Batley & Dewsbury RLRS.

Liam is one of the professional games younger officials and has been promoted to the full-time referees squad for the current year.

After beginning in the professional ranks as a teenage touch judge, ‘Rushy’ has quickly established himself as a future prospect of the refereeing game and over the past two years has become a regular at Championship and League One level.

A regular at Cougar Park over the past few years as a touch judge, Sunday’s fixture will be the second time he has refereed the Cougars as the man in the middle, the previous being March’s friendly loss to Oldham.

Rush will be assisted this weekend by touch judges Jamie Butterfield (Warrington) and Clint Sharrad (Manchester). Ollie Maddock (Warrington) is the reserve referee.

Keighley Cougars registered their first away win for two years with a 20-42 victory against the Rochdale Hornets at the Crown Oil Arena.

It ended a near two-year wait for a win away from Cougar Park as the Cougars cemented themselves within the play-off positions.

Taylor Prell opened the scoring in the game’s opening 60 seconds with Rochdale levelling the scoreboard through Will Tate.

However, a clinical finish to the first half saw Rhys Lovegrove’s side take a 22-6 lead into the break.

Tries in quick succession shortly before half-time from Josh Slingsby, Prell, and Mo Agoro giving the visitors the advantage.

A second try from Tate threatened to get the Hornets back into the contest but the Cougars struck back quickly as Agoro rose highest from a Jack Miller kick to take the ball and seal a brace of tries.

The home side again threatened a possible comeback as Joe Taira crashed over but a penalty conversion from Miller was followed up by tries from Aaron Levy and Ben Stead to end the game as a contest and seal the victory.

Rochdale would have the final say on the afternoon however as Dan Nixon dove over in the corner for a consolation effort.