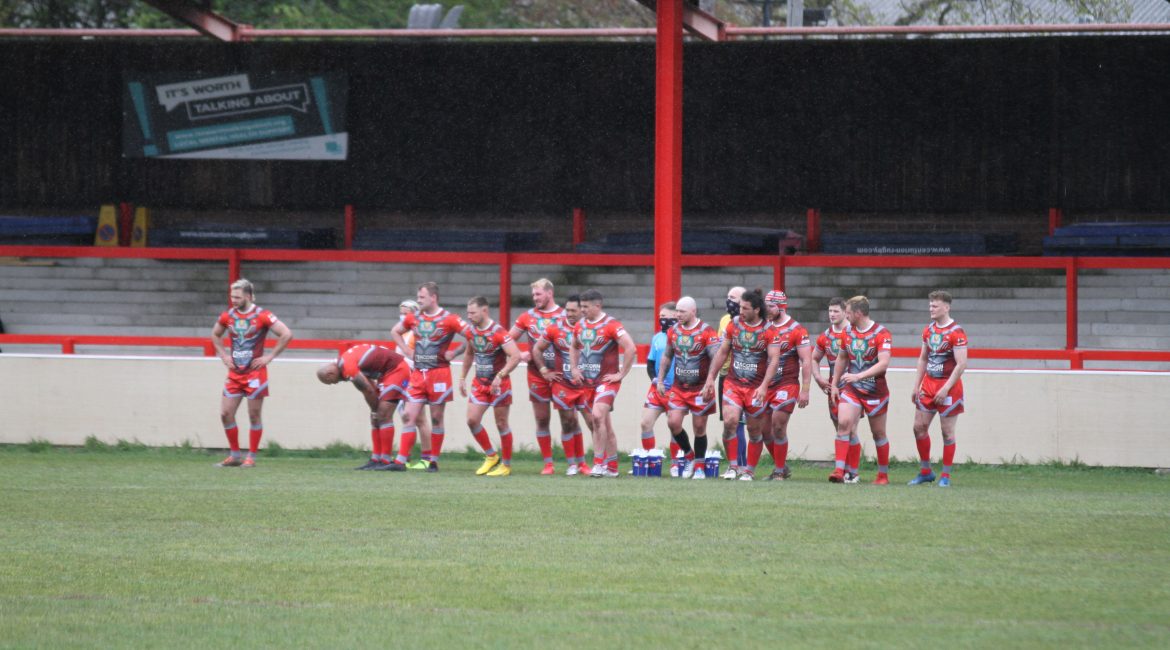 The Keighley Cougars were on the receiving end of a heavy 40-18 defeat at the hands of the Barrow Raiders.

The Cougars in truth were their own worst enemies at times and found themselves on the backfoot early as tries from Luke Cresswell, Jarrad Stack, and Hakim Miloudi, put Barrow into an early 18-0 lead.

Brenden Santi made it three tries in three games to register Keighley’s first points of the afternoon, but they conceded once more before the half-time interval through a try from Jamie Dallimore.

Lovegrove’s side started the second half bright and got back into the game through tries from Jake Webster and Scott Murrell but a penalty goal from Jake Carter was followed by a second try of the afternoon from Stack to but Barrow out of sight in terms of the contest.

The Raiders still had time for a further try through Ben Harrison to compound the Cougars misery on the afternoon in Cumbria.

Rochdale Hornets also come into this Sunday’s game looking to bounce back from a defeat after losing 30-22 on the road at Doncaster.

In similar vain to the Cougars, the Hornets fell behind to an early 18-0 lead as Doncaster raced into a three try advantage through scores from Brandon Douglas, Jason Tali, and Oliver Greensmith.

Shaun Ainscough crossed in the corner late in the first half to make sure the Hornets had points on the board heading into the half-time break.

The Hornets fell further behind through a Sam Smeaton effort but worked their way back into the arm wrestle with Zak Baker and Luke Fowden finding their way over the line for Matt Calland’s side.

A second try from Greensmith sealed victory on the afternoon for the Dons but Rochdale would have the final say in defeat through a late Jack Higginson score.

Head Coach Rhys Lovegrove has been forced into three changes to his 21-man squad with injuries taking their toll after the defeat to Barrow.

QLT (Leg), Dan Parker (Hamstring), and Zach Braham (Hamstring), are all sidelined with Ben Stead returning to the squad and first inclusions of the season from both Spencer Darley and Bobby Darbyshire.

The other change to the squad from last week sees Josh Slingsby come into the 21-man in the place of Ryan Wright.

The visit of the Hornets comes too soon for Mo Agoro (Leg) as he continues his recovery from injury whilst Jack Arnold is available for selection after avoiding suspension in disciplinary on Thursday.

Matt Calland has also made several changes to his squad following their own away defeat last weekend at Doncaster.

Ben Calland, Jack Higginson, Ben Forster, and Lewis Whalley, all miss out as the Hornets head across the Pennines for the second consecutive weekend.

Lewis Galbraith is included for the first time in the Betfred League 1 season after serving a two-game suspension with veteran forward Fui Fui Moi Moi returning after missing out last Sunday.

Prop forward Callum Marriott and veteran winger Dale Bloomfield also return to the side after being unavailable at the Keepmoat, but hooker Ben Moores misses out once again.

KEIGHLEY COUGARS HEAD COACH RHYS LOVEGROVE: “Rochdale are a very well coached side who play with a lot of tempo.

“They’re good in the middle and full of experience too, with Fuifui Moimoi and Sean Penkywicz, Sean got four tries the other week.

“But we can’t let that distract from ourselves, we have to get our own house in order before worrying about others.”

ROCHDALE HORNETS HEAD COACH MATT CALLAND: “I’m very disappointed with the result against Doncaster. We obviously started the game very poorly and gave ourselves too much to do.

“We looked a different team in the second half and created enough chances to win the game, but there were too many errors and penalties, and we need to tidy up on both those areas.

“I’m convinced we will bounce back from this.”

The last meeting between these two sides was also both team’s final games in 2020 before the Covid-19 pandemic hit and changed the world as we know it.

On a wet afternoon at the Crown Oil Arena, the Hornets recorded a 29-14 victory as they took advantage of a lacklustre Keighley performance.

The Hornets found themselves in an early 14-0 lead with tries from Andy Lea and Jamie Tracey, and a Sam Freeman penalty conversion, putting them on the front foot as the Cougars error count continued to rise.

Rhys Lovegrove’s side would however close the gap on the scoreboard to four points as they found the line twice through Ritchie Hawkyard and Jake Webster.

The second half saw Rochdale begin strongly as they increased their lead further through a Liam Whalley try and a drop goal from Martyn Ridyard.

Hawkyard though would score his second try of the afternoon and find another four points for the Cougars as they tried to get back into the contest.

However, the home side would have too much and another try through Sam Hopkins capped off a good afternoon at the office for Matt Calland and his side.

Despite starting the season with two defeats at the hands of Stanningley and the Barrow Raiders, the signs are promising for Dave Needham and the Keighley Cougars Ladies side.

A mixture of youth and experience continues to gel and show promise and they will be hoping for another impressive performance on the road this Sunday when they face the Widnes Vikings in Round Three of the Women’s Championship season.

The ladies game in Cheshire gets underway at 2pm.

Tickets are still on sale for Sunday’s game until MIDNIGHT ON SATURDAY.