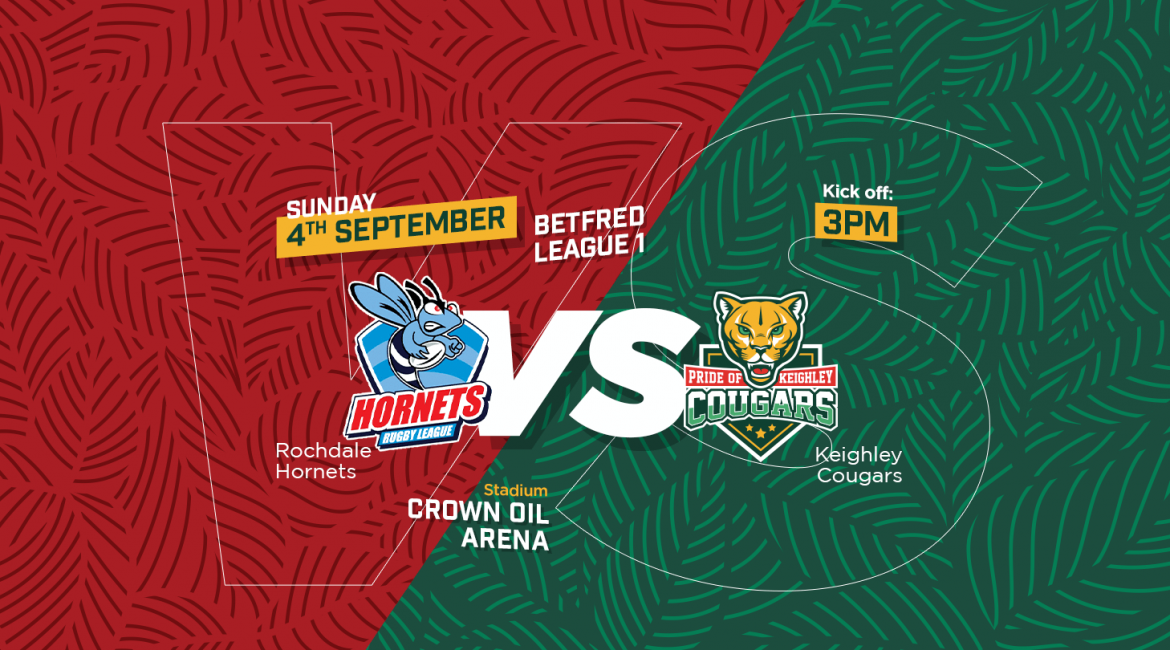 Alex Eckley scored the afternoon’s opening try for the Crusaders, but the Cougars made sure this was nothing more than a mere disruption to their party.

Tries from Charlie Graham and Jack Miller put Keighley in front and from there the floodgates would open.

Buster went over on his final home appearances with Graham stepping through a tackle to score his second try of the game.

Feather would be sinbinned, allow Pat Ah Van to score for North Wales, but it was quickly cancelled out through an Alix Stephenson effort.

Keighley were in a party mood and ran in a further four tries through Dan Parker, Miller, Jake Webster, and Lewis Young.

The Crusaders had the games final say though as Rob Massam powered over in the corner on the sound of the final hooter.

Despite only being able to name 17 players, the Rochdale Hornets put up a club record 102-4 home victory against the West Wales Raiders.

Scoring three early tries through Jy Hitchcox, Dan Nixon, and Cian Tyrer, a Shane Lee score for the Raiders made it respectable with 23 minutes on the clock.

However, the screw was truly turned from that point on as Rochdale blew their opponents off the park.

Gregg McNally, Aiden Roden, Tyrer, Rangi Chase, and Rob Worrincy would all cross to give the Hornets a 42-4 lead at the break.

The second half continued in the same fashion as Gary Thornton’s men smashed their club record to pieces.

Roden, Hitchcox, and McNally all extended their personal tallies within the first quarter of the half.

McNally and Tyrer wrapped up their hat-tricks and with West Wales bodies broken, Connor Aspey and Ben Killan added to the misery.

And in the final ten minutes, Hitchcox would complete his own treble with Daniel Brewin, Worrincy, and Aspey completing the rout in front a delighted home crowd.

Head Coach Rhys Lovegrove has made four changes for his final 21-man squad of the 2022 season.

Following successful return to plays following concussion, Mo Agoro and Junior Sa’u return to the squad as does Dane Chisholm after serving his one-match suspension.

Kyle Trout (Tricep) is included but a fitness test will determine whether he features or not on Sunday.

Matthew Bailey, Eddy Pettybourne, Dalton Desmond-Walker, and Anesu Mudoti are the four players who drop out of the squad.

Injuries and suspensions continue to take their toll for Gary Thornton, as he is only able to name a nineteen-man squad for this weekend’s game which includes four new faces.

Cameron Cowin, Kenneth Rowlands, Dean Stanton, and Jordan Strand all come out of the community game, where they have been featuring in the North West Men’s League this year.

There also are returns to the side for veteran forward Fuifui Moimoi and on loan half-back Kieran Rush. With Tyler Britle named after joining from Leigh Miners Rangers last month.

This Sunday’s game will be officiated by Scott Mikalauskas from the Leigh Referee’s Society.

Scott’s last Cougars appointment came just a fortnight ago when he officiated our 48-18 away win against Doncaster.

Keighley Cougars maintained the pressure at the top of the League 1 table, continuing their 100% record with a 40-16 home victory over the Rochdale Hornets.

The Cougars opened the afternoon’s scoring through a trademark try from dummy half courtesy of James Feather.

However, the Hornets would take the lead through two quickfire tries from Cian Tyrer and Lewis Sheridan.

The game would ebb and flow before Nathan Roebuck raced through a defensive line gap to level the scores, the boot of Jack Miller giving Keighley a slender lead at the break.

Two further penalty conversions from Miller would extend that lead but Rochdale levelled through Ben Killian, moments after Paul Brearley was sinbinned.

Killan himself would see yellow, reducing his side to 11 men, and this opened the floodgates for Rhys Lovegrove’s side.

Four tries in fourteen blistering minutes saw Charlie Graham, Miller, and a brace from Mo Agoro send the home side on their way to a comfortable victory.

Sunday’s match at the Crown Oil Arena is ALL TICKET due to a restricted capacity of 1600 being in operation.

Supporters MUST NOT attend this fixture without purchasing a ticket before travelling across the Pennines.

Tickets are priced at £16 for Adults, £14 for Concessions, £5 for Students, and FREE for Juniors.

You can purchase your tickets by clicking HERE