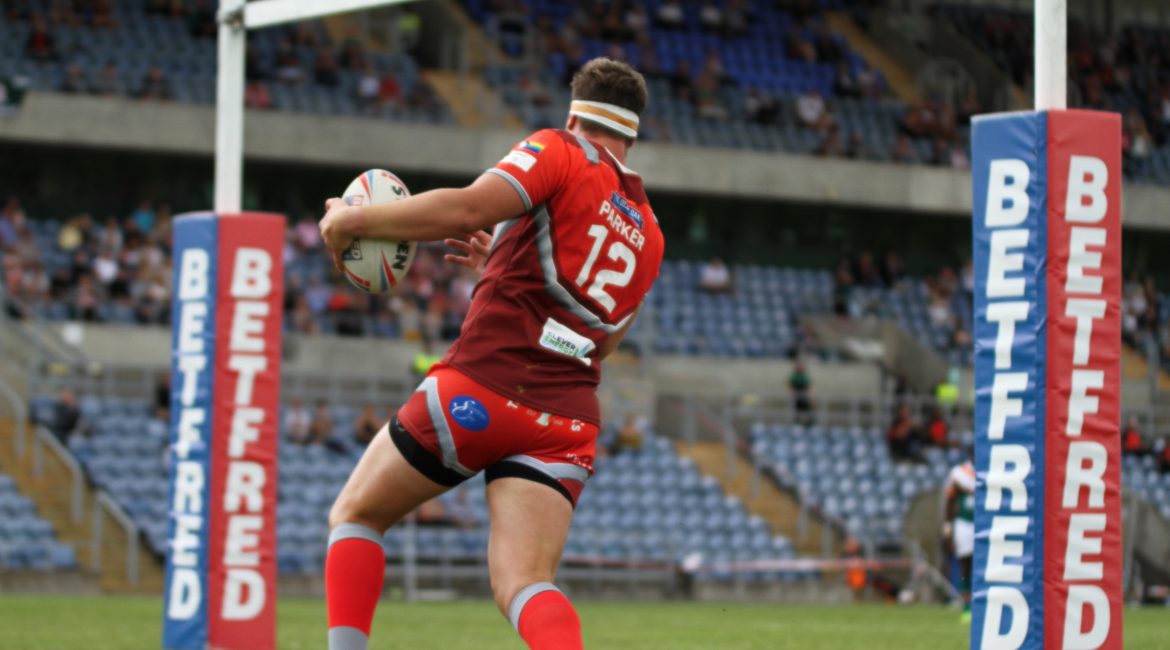 Keighley Cougars ended their losing streak on the road with a dramatic late comeback to secure a 20-20 draw away at local rivals Hunslet RL.

In a fiercely contested derby, the game swung back and forth throughout with a draw the fair result come the sound of the final hooter.

The Cougars started the brighter of the two sides and opened the scoring through Dan Parker, who rounded the posts on the back of a break from Jack Miller.

The visitors would extend their lead further midway through the half as Taylor Prell fought his way over on the back of clever play near the line from Aaron Levy.

The introduction of Jordan Andrade however would change the momentum of the game, the prop scoring two tries shortly before the interval to send Hunslet into the break with a two-point advantage.

Shortly after the restart, the home side would record a third try when Vila Halafihi burrowed his way over from close range.

A swinging arm on Andrade, and a further penalty for interference, allowed Jy-Mel Coleman to convert two penalty goals to take the margin between the sides to ten points.

With backs against the walls, the Cougars would dig deep, and two late tries would rescue them a point.

Charlie Graham would touch down his own grubber in the corner before an outstanding flowing move from the restart saw Dalton Desmond-Walker power his way over to rescue a share of the spoils.

After their fixture was postponed last week under Covid-19 protocols, Sunday will be the Rochdale Hornets first outing since a 30-18 victory away at the West Wales Raiders three weeks ago.

The Hornets started the contest brightly and were rewarded with two early tries through Sean Penkywicz and Sam Freeman, with Zac Baker seeing an effort ruled out for a forward pass.

Luke Fowden however would score a third try for Rochdale, but West Wales hit back as Callum Merrett found a way over for a try on debut.

The Raiders then found themselves within two points of their visitors shortly after half-time as Jamie Murphy scored.

However, the Hornets would score a further two tries as both Fuifui Moimoi and Callum Marriott crashed over on the back of dummy half plays from Ben Moores and Penkywicz.

Daf Phillips then crossed for West Wales to threaten a grandstand finish in Llanelli but Dan Nixon scored in the 78th minute to seal victory for Matt Calland’s outfit moments after Marriott was sent off for a dangerous high tackle.

Head Coach Rhys Lovegrove has made four changes from the initially named squad for the draw away at Hunslet last weekend.

QLT and PLT are both ruled out through self-isolation after coming into close contact with a positive Covid-19 case with Josh Lynam and Jason Muranka dropping out of the side.

Coming into the squad in their place is Brenden Santi (Shoulder) as he returns from the injury that has sidelined him for the past fortnight.

There also recalls for Ben Stead and Jack Arnold, with Robert Matamosi also returning after spending most of July away with the Army.

Con Mika (Ankle) has been cleared to play with James Feather missing out after coming into the side as last-minute replacement at the South Leeds Stadium last time out.

Rochdale Hornets Head Coach Matt Calland has seen his options limited as a result of the Covid outbreak that forced last weekend’s game to be postponed.

Gavin Bennion returns from injury whilst Lewis Sheridan also returns after being ruled out of their last fixture against West Wales through Covid protocols.

There are also recalls for Declan Sheridan and Adam Hesketh, who both missed out in Llanelli.

Reece Dean, who joined on loan from Newcastle this week, comes straight into the side as do the duo of Tom Whur and Will Tate who both re-joined for a second loan spell of the season from the Hull Kingston Rovers.

Fuifui Moimoi, who was awarded the Man of the Match in their last outing, is not named in the squad.

Zac Baker, who received a four-game ban, and Callum Marriott, who has been banned for two matches, are both ruled out through suspension.

KEIGHLEY COUGARS HEAD COACH RHYS LOVEGROVE: “They need to work harder in regard to getting their mindset for away games right.

“The team works hard physically, they train hard, and I will always back them to the hill.

“They’re a hard-working group and you don’t become a bad team in just one week. We know it is there, we saw it against Barrow.

“We need that confidence we show at home and transmits onto the field to be shown when we play away.”

ROCHDALE HORNETS PROP FORWARD LUKE FOWDEN: “I think every game has been a tough test so far.

“There’s no game you can take lightly. Keighley will come also wanting a big result, so we’ve got to be ready for a really tough game.

“Hopefully it won’t be as close as the last game.

“In the mid-second half it started to get a bit nervy when we should’ve probably seen the game out more comfortably, so we’ve got to be better defensively than we were there.”

The reverse fixture between the two sides in late May was a pulsating high scoring affair that saw the Hornets escape West Yorkshire with a 36-43 victory.

Jack Miller opened the scoring for the Cougars with a penalty conversion, but those two points were quickly cancelled out by a Lewis Galbraith try.

Ryan Forshaw would then extend the Rochdale lead, but Keighley hit back quickly through an effort from Alfie Seeley.

Minutes later, the Cougars would take the lead as Scott Murrell exposed a gap in the defensive line and raced through to touch down.

However, Rochdale finished the half strongly and took control of the game with tries from Gavin Bennion and Shaun Ainscough before Rob Fairclough kicked a drop goal from distance.

This momentum carried over into the second half for the visitors with a further try from Fairclough before the Cougars would reply momentarily through Jake Webster.

Josh Jordan-Roberts and Fuifui Moimoi both scored to take the Hornets lead to 18-37, but a sensational five-minute period would follow that saw the home side run in three converted tries to move within a point.

Aaron Levy, Charlie Graham, and finally Miller, all scored sensational length of the field efforts to set up a tense finish at Cougar Park.

However, a handling error near to the line presented Rochdale with possession and Ainscough scored his second to make sure his side scraped home with the win.

Tickets are still on sale for Sunday’s game as the Cougars head across the Pennines for this Betfred League One fixture.

You MUST purchase a ticket in advance of attending the Crown Oil Arena on Sunday afternoon to gain entry into the ground.

Away supporters are advised to buy tickets in Block E of the stand with Block G being reserved as a block for those who wish to attend the game but sit in a designated socially distanced area.