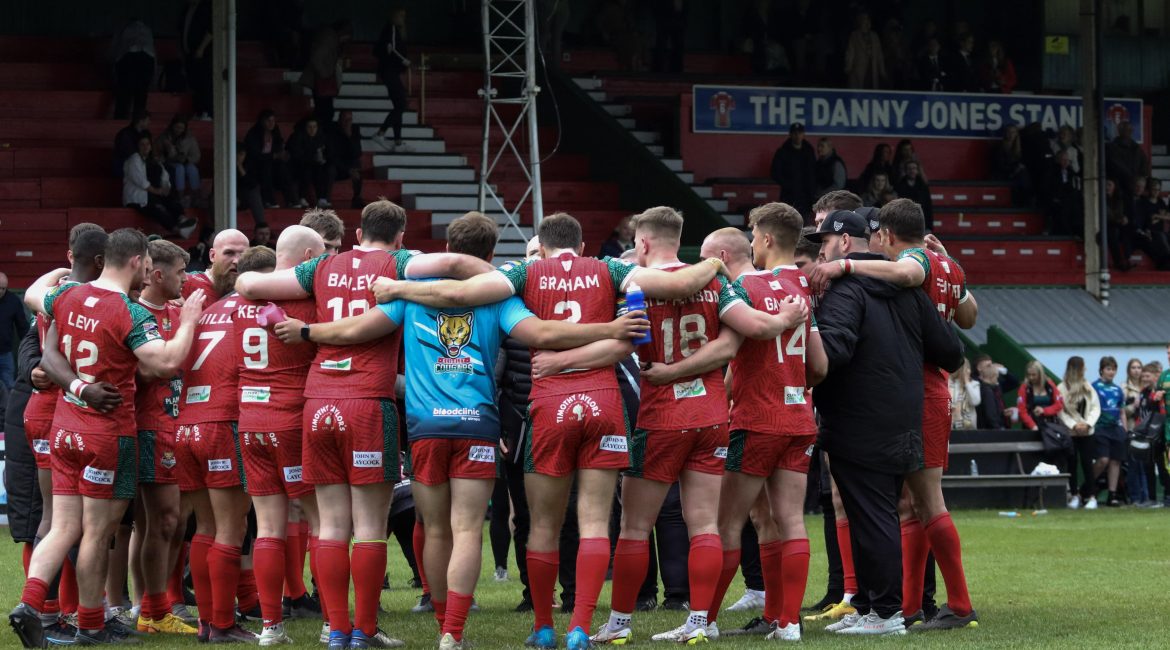 The Keighley Cougars maintained their 100% start to the new season with a comprehensive 96-0 home victory over the London Skolars.

The Cougars ran in 17 tries on the afternoon with Jack Miller contributing from the boot with 14 conversions.

The game as a contest was over inside the first 13 minutes as two tries from Mo Agoro, and further scores from Lewis Young and James Feather saw Keighley race into a 22-0 lead.

Further scores would follow as Miller, Jake Webster, Nathan Roebuck, and Charlie Graham all touched down to send the home side into the sheds with a 46-0 lead.

The second half would see the onslaught continue Agoro scored a third, and Young a second, inside the opening ten minutes of the half.

Graham sealed his brace, with Dan Parker and Billy Gaylor also getting in on the act before Agoro dived over in the corner for a fourth.

Kyle Kesik raced over for his first of the season with Parker and Roebuck both finding time to score their respective second tries to wrap up a record-breaking afternoon at Cougar Park.

Despite a three week break from action, the West Wales Raiders nightmare season continued with an 84-4 hammering away at the North Wales Crusaders.

The Crusaders got off to a rapid start as a double from Matt Reid and a further score from Rob Massam put them way in front after just 12 minutes.

A Fergus Simpson score would be as good as it got for the Raiders as the response was a further three times from Massam and further four pointers from Harry Swarbrick and Brad Billsborough before the half-time break.

The second half would follow in a similar vein with another two tries from Reid and Ben Moores score inside the opening ten minutes.

Things would continue to get worse for West Wales as Gav Rodden, Swarbrick, and Alex Eckley all found their way over the line.

And their misery was compounded inside the games final two minutes as Callum Wood score two quickfire tries before the sound of the final hooter.

Dane Chisholm and Toby Everett come straight into the side after joining the club earlier this week, and there are recalls for both Chris Cullimore and Rory Nettleton.

There is also an inclusion for Keenan Dyer-Dixon, who played for this weekend’s opposition in their defeat last time out.

Scott Murrell and Jake Webster are rested whilst Myles Tate and Taylor Prell out. Dan Parker is ruled out through suspension.

West Wales Raiders Head Coach Ashley Bateman has also made five changes to his side following their defeat in the Welsh derby.

Ewan Badham returns to the side after missing out on the trip to Colwyn Bay whilst there are also recalls for Lewis Allen, Callum Mulkeen, and Louis O’Sullivan.

New signing Oliver Firth comes straight into the Raiders squad after signing for the Llanelli based outfit.

Josh Slingsby and Keenan Dyer-Dixon have both returned to the Cougars following their loan spells whilst Owen Priest, Fergus Simpson and Louis Watson drop out of the squad.

“It is a big trip down there so we will be resting some players who have played big minutes and the good thing is that we managed to rest a few more towards the back end of the game against London.

“There are some players who are carrying a few loading injuries that you pick up throughout the season, especially as we train hard and play an intensive brand of Rugby League.

“However, we will still treat this fixture with the respect and professionalism as we have done with our fixture so far this season.”

“Since the Oldham game, we have been looking to bring in experienced boys whom the young lads can learn from.

“We are a work in progress, and I want to build over a couple of years to bring the boys on to compete with the top teams in the league.

“We have a massive injury list at the moment, but players are working to get back and with new ones coming it, we will only get better.”

This Sunday’s game will be officiated by 43-year-old James Jones from Cardiff.

James is the Head of Match Officials at Wales Rugby League and has been a Grade 1 official with the RFL since 2017 after making the decision to move from Rugby Union in 2013 after being made redundant by the WRU the previous year.

Prior to switching codes, James was an international level referee in Rugby Union who officiated tier one nations such as Australia whilst also refereeing in the Premiership, Pro-14, European competitions, and the World Cup Sevens.

James has refereed the Cougars on a couple of occasions in the past, the last of which came in this fixture last season when back in August 2021 the Cougars defeated the West Wales Raiders 12-42 towards the back end of the regular season.

Keighley Cougars made it three consecutive victories as they eased past the West Wales Raiders, winning 12-42 in Llanelli.

The Cougars took an early two try lead through Jack Miller and Josh Slingsby, and in the process would see a further three tries disallowed by the officials for forward passes and handling errors.

The Raiders though would get back into the game as Will Ramsey pounced on a dropped ball to dive home beneath the crossbar.

This would be a minor blip as QLT raced over from 50 metres out to put Keighley back on the front foot.

Jake Webster raced over shortly before the interval with Con Mika being placed on report by the officials.

The Cougars continued to press, and Miller proved the beneficiary as he scored his second try of the afternoon on the back of a line break from Webster.

They continued in a similar vein and scored once more as Josh Lynam raced onto a pass from Kyle Kesik.

With West Wales tiring, they continued to turn the screw as PLT managed to squeeze his way over in the corner.

The home side would score once more through Phil Cowburn, but dissent saw Ashley Bateman sin binned.

And on the back of the resulting penalty, Miller touched down his own grubber to complete his hat-trick and cap off the victory.

Advanced tickets for Saturday’s game at Stebonheath Park are not available with the game a pay on the day fixture.

Admission prices for the fixture are set at £10 for Adults, £5 for Concessions, and FREE for Under-15’s.