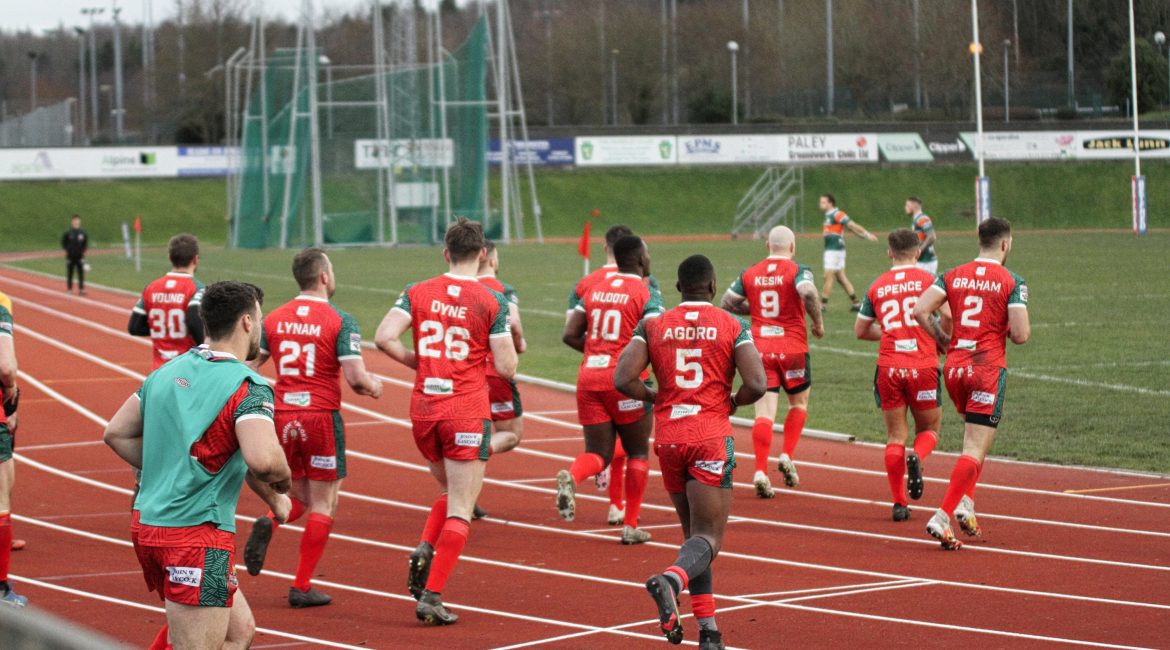 The Keighley Cougars 2022 season began with a Challenge Cup defeat away at Hunslet RL.

On a cold January’s afternoon in South Leeds, a game low on quality was won by the Parksiders as they made the most of errors and ill-discipline within the Keighley ranks.

Kiedan Hartley dived over in the corner to open the scoring for Hunslet, with their lead extended through the boot of Jordan Syme from a penalty conversion.

The Cougars though would draw level on the sound of the half-time hooter as Anesu Mudoti crashed over from close range on debut.

The second half would see Hunslet run in 16 unanswered points on their way to victory.

Jason Mossop was first on the scoreboard in the second forty, evading touch to fight his way over.

Keighley would find themselves down to 10-men when after Dan Parker was sin-binned, both Spencer Darley and Kyle Kesik were shown red cards in quick succession.

The numbers advantage would catch up with the visitors as Harvey Whiteley would score a brace of tries from dummy half before Jack Mallinson rounded up the victory with a penalty conversion.

It was a night to forget both on and off the field for the Roughyeds as they were defeated by an amateur side in the Cup for the very first time on an evening affected by three floodlight failures.

Two tries in quick succession from Nathan Fozzard and Lewis Price gave Lock Lane a 10-0 advantage at the half-time interval.

Oldham came out for the second half firing, Jason Muranka getting them back into the game on the back of some great play by Dave Hewitt to create the try.

The home side squandered chances to level up the scoreboard and were punished as Danny Holmes extended the Lock Lane advantage only for the Roughyeds to hit back immediately through Hewitt.

However, a try late on from captain Chris Sibbons sealed victory on an historical evening for the Castleford based community club.

Head Coach Rhys Lovegrove has named all 29 available players for Sunday’s visit of the Roughyeds to Cougar Park.

This means that players who missed out against Hunslet in late January for various reasons will all take to the field for the first time in 2022 as will the trio of Bradley Ho, Rory Nettleton, and Keenan Dyer-Dixon, who have joined the Cougars in the last month.

Dan Parker (Suspension) and Billy Gaylor (Concussion) both miss out as the result of their respective incidents that resulted in them leaving the field against Hunslet.

Myles Tate (Injury) is also ruled out whilst Robert Matamosi is unavailable for selection following deployment by the armed forces.

Oldham Head Coach Stuart Littler has named a 22-man squad as his side head across the Pennines.

Jamie Pye, Kian Morgan, and Callum Cameron also are set to feature for the first time this year after missing January’s cup tie.

There are four former Cougars in the squad in the shape of Jack Coventry and Ryan Wright, who both moved to Whitebank from Cougar Park over the summer, and Will Cooke and Emmerson Whittel.

KEIGHLEY COUGARS HEAD COACH RHYS LOVEGROVE: “The fact we’re facing Oldham first up in the league was probably a factor in the discussion I had with (Cougars’ head of rugby) Andrew Henderson about what we needed from our friendlies

“The whole team will get minutes against Oldham.

“There’ll be some structure, a loose interpretation of what we’ve seen in training, and then that team will get cut for Swinton.

“Oldham is an opportunity for everyone as we haven’t played for a while.

“We did have Hunslet in the Challenge Cup in January, but in terms of the systems and processes I like to play, it can almost be ignored, as the players were basically just thrown out there having not worked on any team stuff.”

OLDHAM RLFC HEAD COACH STUART LITTLER: “It was a good initiative for the boys against Salford.

“We need to play more as a team, so it helped a lot in that regard. We got footage for future reference but, above that, we saw one or two things we can work on this week.

“There were a couple of things we can focus on in the next couple of weeks as we build towards our first league game, also against Keighley.

“It also helped as part of the preparation for the friendly at Cougar Park on Sunday.

“Things will be ‘upped’ a bit this week ahead of a friendly against a team in our division.”

This Sunday’s game will be officiated by 21-year-old Liam Rush of the Batley & Dewsbury RLRS.

Liam is one of the professional games younger officials and has been promoted to the full-time referees squad for the current year.

After beginning in the professional ranks as a teenage touch judge, ‘Rushy’ has quickly established himself as a future prospect of the refereeing game and over the past two years has become a regular at Championship and League One level.

A regular at Cougar Park over the past few years as a touch judge, Sunday’s fixture will be the first time Liam has been the man in the middle for a Cougars game.

Our last meeting was way back in the summer of 2019, in what was Rhys Lovegrove’s first game as Head Coach of the Cougars.

After a fiercely competitive start to proceedings in a fast-paced game, Oldham opened the scoring when, after a break of the Cougars line, the scrambling Keighley defence forced a wild offload from Gareth Owen but the bounce of the ball fell kindly to Danny Langtree who rounded to touch down.

But from the restart, Keighley shot themselves in the foot as they conceded a penalty. From the resulting set of six, Dave Hewitt’s kick to the corner was touched down by Anthony Bowman despite the best efforts of Davey Dixon to knock the ball dead.

Matt Welham missed a tackle on Harry Aaronson and the winger raced half the length of the field to dive home underneath the crossbar.

Oldham extended their lead further on the back of a penalty close to the line as Bowman turned through a tackle to touch down for his second of the afternoon.

And another Keighley error led to a further Oldham score as Lovegrove’s men conceded a fresh set on the line and the ball was worked out wide to Aaronson, who walked home in the corner.

The away side wouldn’t roll over and continued to pile on the pressure but were struggling to find a way through. This was until the final minute when a tunnel ball sent Jason Muranka racing 30 metres to score Cougars’ first try in 191 minutes of rugby league.

Tickets are priced at 10 for Adults, £8 for Concessions, and FREE for Under 16’s.