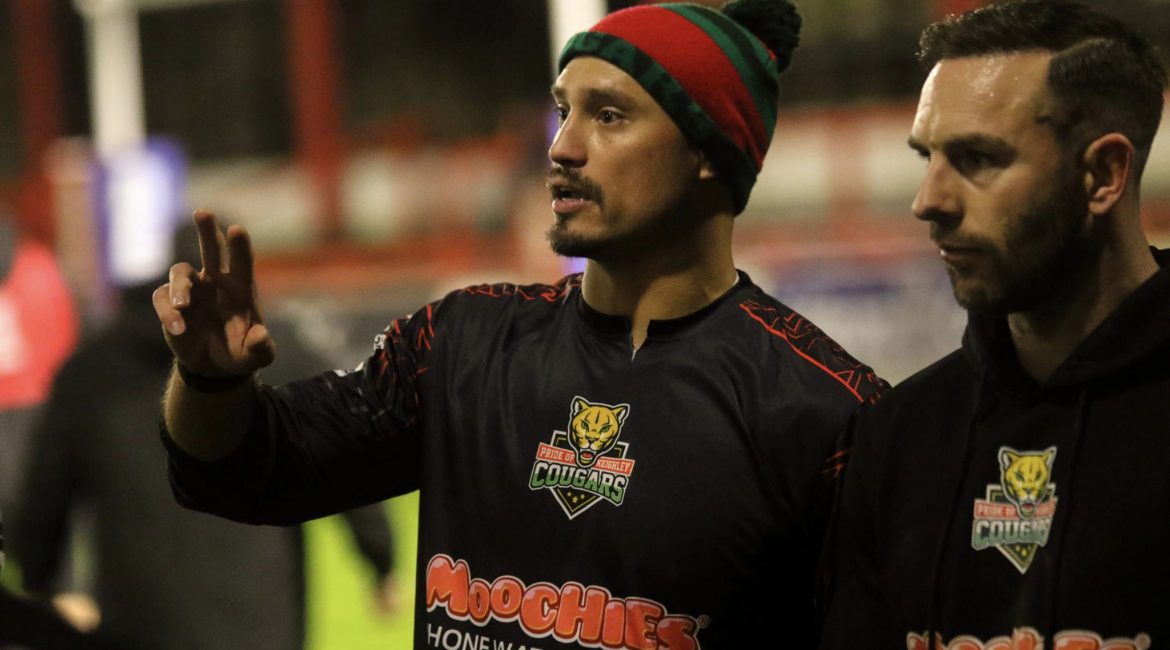 The Keighley Cougars completed a perfect season by making it 20 wins from 20 in a high scoring game away at a depleted Rochdale Hornets.

The Cougars raced into a four-score lead with a Charlie Graham brace early on being complemented by scores from Alix Stephenson and Billy Gaylor.

Ben Killan would score the 14-man Hornets first points of the afternoon shortly before half-time.

The game though was put beyond doubt with two tries in the opening four minutes of the second half through Junior Sa’u and Mo Agoro.

Rochdale wouldn’t go down without a fight and hit back with two tries courtesy of Fuifui Moimoi and Gregg McNally.

Three more quickfire tries from the Cougars would blow the Hornets away, Harvey Spence, James Feather, and Sa’u all finding their way over the line.

Aiden Roden would find another score for the Hornets before Lewis Young wrapped up the game, and Keighley’s season, in style with a superb individual effort on the final hooter.

The curtain was brought down on a dismal end to the season for Newcastle Thunder with defeat away at Whitehaven.

A poor first half did most of the damage as Thunder went into half time trailing by thirty points without reply.

Andrew Bulman would score a brace of tries and be complemented by scores from Luke Broadbent, Dion Aiye, and Josh Martin.

Newcastle would respond though immediately after the interval, Gideon Bofao crossing the line.

Haven though would thwart the thin glimmer of hope with Ryan King powering over on his last appearance for the club before a move to Halifax before Guy Graham found the in goal for a try of his own.

With the game already lost, Thunder rallied to score three tries in the final five minutes of the game to make the scoreline respectable.

Six of his off-season recruits are named in the side with Kyle Kesik featuring after missing the end of last season through suspension.

Anesu Mudoti and Nathan Roebuck will also feature after injury prematurely ended both their 2022 season.

Luke Gale and Thomas Doyle are both suspended with Mo Agoro, Brad Walker, and Lloyd Roby all unavailable as they continue their recoveries from head, shoulder, and knee injuries respectively.

Newcastle Thunder Head Coach Chris Thorman has named a 24-man squad ahead of the visit of the Cougars this weekend.

He includes 12 of the new faces he has brought in over the winter since being appointed to the job in late September, this includes Hull KR loanee Jack Potter, who is one of three new faces brought in by the Newcastle this week alone.

Fellow KR loanee Daniel Okoro does not feature whilst Mitch Clark also misses out after plying his trade in the French Elite competition during the winter.

Saturday’s match official for this opening friendly of 2023 is Nick Bennett, who despite being from Sheffield is a member of the Wakefield Referee’s Society.

A grade 1 match official, Nick was moved to the semi-professional level ahead of the 2017 season.

Quickly impressing in both League 1 and the Challenge Cup, Nick would be handed his first Championship outing in June 2018 as Toulouse and Leigh came head-to-head in the south of France.

From there, he would establish himself as a regular face in the Championship whilst also beginning to run the lines as a Touch Judge in the Super League.

Nick’s last appointment to a Keighley Cougars fixture came in July 2021 when he was the man in the middle for our 40-12 home victory over Barrow Raiders at Cougar Park.

The last meeting between these two sides lives long in the memory, as Newcastle emerged 16-12 victors at Cougar Park in a Challenge Cup tie played in nothing but mud and rain.

Amidst the worst storm seen on these shores in many a decade, a game lacking any quality or skill saw Newcastle grind out progression shortly before the pandemic hit.

Walker though would be forced off the field with a season ending injury shortly after, a heavy collision with Dalton Desmond-Walker ending his involvement.

Roche would then turn from hero to villain, being sent off for a late hit on Lewis Wray.

Thunder would take a twelve-point lead into half-time with Reece Dean converting three penalty goals before the interval.

The Cougars would get onto the scoreboard through Josh Lynam shortly after half-time before things broke down with Thunder pair Mikey Wood and Brenden Santi, now with Cougars, placed on return.

The boot of Dean would knock another four points across to see Newcastle over the line, either side of a try from Aaron Levy.

Tickets are available to purchase ahead of travelling to Tyneside this weekend.