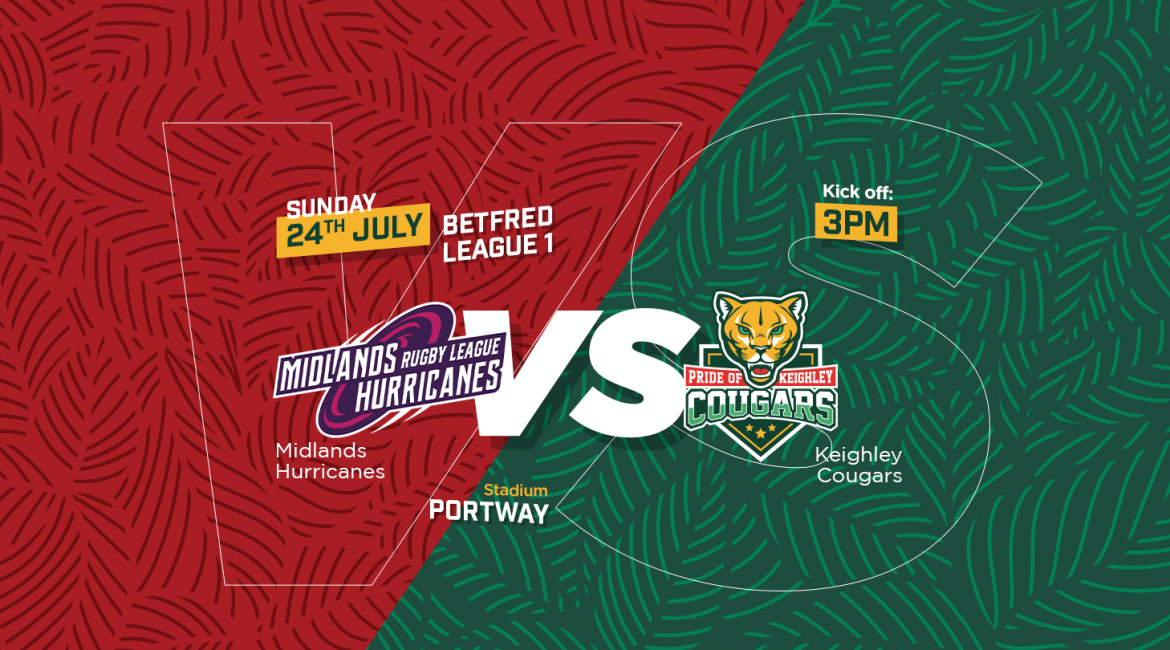 The Keighley Cougars maintained their 100% record this season with a 68-0 home victory against Cornwall.

An early Junior Sa’u double either side of a solo effort from Alix Stephenson but the Cougars on the front foot.

Charlie Graham, Mo Agoro, and Jack Miller would all cross before the half-time interval with Tom Ashton seeing yellow and being sent to the sin bin in the halves dying seconds.

They made the most of the man advantage early in the second half as Aaron Levy crossed.

Dan Parker managed to fight his way over the line before Agoro completed his hat-trick.

Another Cornwall sin bin followed as Myles Tate had his afternoon ended early through a tip tackle.

And then on the sound of the hooter, Lewis Young broke the line and raced over beneath the dot.

Despite a battling performance, the Midlands Hurricanes fell to a 54-22 away defeat at the hands of the Swinton Lions.

The early stages of the game were tense before Brad Clavering was sin-binned in the 9th minute.

This allowed the Lions to race into an 18-0 lead with Mitch Cox and a George Roby double.

However, the Hurricanes fought back and went into half-time only trailing by eight points as Matt Welham and Kieron Lawton crossed either side of Swinton’s Richard Lepori being sent to the bin.

Jack Hansen opened the second halves scoring for the Lions, but the Hurricanes hit straight back through Ben Stead.

A quick triple salvo though through Lepori, Nick Gregson, and Lewis Hatton though allowed the home side to pull away.

Elliot Hall marked his second debut for the Hurricanes with a consolation try, but another late double from Roby put some gloss on the scoreboard for Swinton.

Dane Chisholm returns following suspension with Nathan Roebuck (Bicep) also named after being ruled out through injury last time out.

Dalton Desmond-Walker is unavailable with the forward due to get gametime under his belt on Saturday with the Bradford Bulls reserves side.

Jake Webster (Leg) is out through the injury he sustained in the first half last week.

Midlands Head Coach Richard Squires makes four changes from the squad he named ahead of last weekend’s defeat to Swinton.

Bailey Dawson, who joined the club on loan from Hull Kingston Rovers this week, comes straight into the squad and is joined by Tom Blakey, AJ Boardman, and Adam Reed.

Josh Milthorpe and David Weetman, who were on loan from Batley and Workington respectively, both come out of the squad.

As do Alex Sutcliffe and Elliot Wallis, who both featured last time out on dual registration from the Castleford Tigers.

Benn Hardcastle is unavailable due to suspension but there is still a further four former Cougars in the Hurricanes squad.

KEIGHLEY COUGARS HEAD COACH RHYS LOVEGROVE: “The Midlands are the hardest team in the competition to coach against.

“They play an expansive offload game with little structure, and you never know what they will do next, which makes it difficult to prepare for.

“We have struggled against them in the past and this means that this is a massive fixture for us in terms of achieving our goals.

“The way we played against Cornwall was us putting into practice the way that we will have to play this week to make sure we achieve a positive result.”

This weekend’s referee is Aaron Moore of the Wigan’s Referee’s Society.

Beginning his career in Rugby League as a player with the Salford Red Devils and North Wales Crusaders, Aaron made the decision at a young age to retire and follow older brother Liam into the refereeing game.

After retiring from playing in 2018, he went straight into refereeing the professional game for the 2019 season after being appointed to the Grade 1 list for the Championship and League One.

Quickly establishing himself as one of the semi-professional games leading officials, he was moved up to the game’s senior officials list and would begin refereeing in Super League after the Covid-19 stoppage.

And at the end of the 2021 season, he would make history as he and his brother would together officiate both the men and women’s Super League Grand Finals.

Aaron has officiated the Cougars in the past, his last appointment to a Keighley game coming back in August 2019 in this very fixture as Rhys Lovegrove’s side defeated the then Coventry Bears 20-46 in Rugby.

He will be assisted by touch judges Jamie Collier (Rochdale) and Ollie Maddock (Warrington). The reserve referee for this fixture is Andrew Marsh (Wigan).

Keighley Cougars moved to the top of the League 1 table as they grinded out a 29-18 home victory against the Midlands Hurricanes.

It appeared as if Keighley were going to ease their way to victory as they raced into a fourteen-point lead.

Charlie Graham opened the scoring with Jack Miller then converting a penalty after Benn Hardcastle was sin-binned for a professional foul.

Nathan Roebuck extended that advantage further, but Jack Dawson got his side on the scoreboard before the interval.

A second Roebuck try shortly after Hayden Freeman was sin-binned for the visitors looked to have ended the game as a contest.

But Brad Clavering powered his way over and put nerves on edge around Cougar Park.

Dane Chisholm would slot over a drop goal, but from the restart Midlands would win the ball back and get within one point of their hosts courtesy of Matt Welham.

The Hurricanes comeback though was halted in its tracks as Mo Agoro scored twice in the last five minutes to see his side over the line.

He first fought his way over in the corner before racing 70 metres after Chisholm forced a handling error from Matt Welham.

There are no advanced ticket sales ahead of Sunday’s visit to Portway.

All admission is pay on the day and is priced at £15 for Adults, £10 for Concessions, and £2 for Children.

Please note that Portway is a cashless venue meaning all payments are CARD ONLY at the stadium.