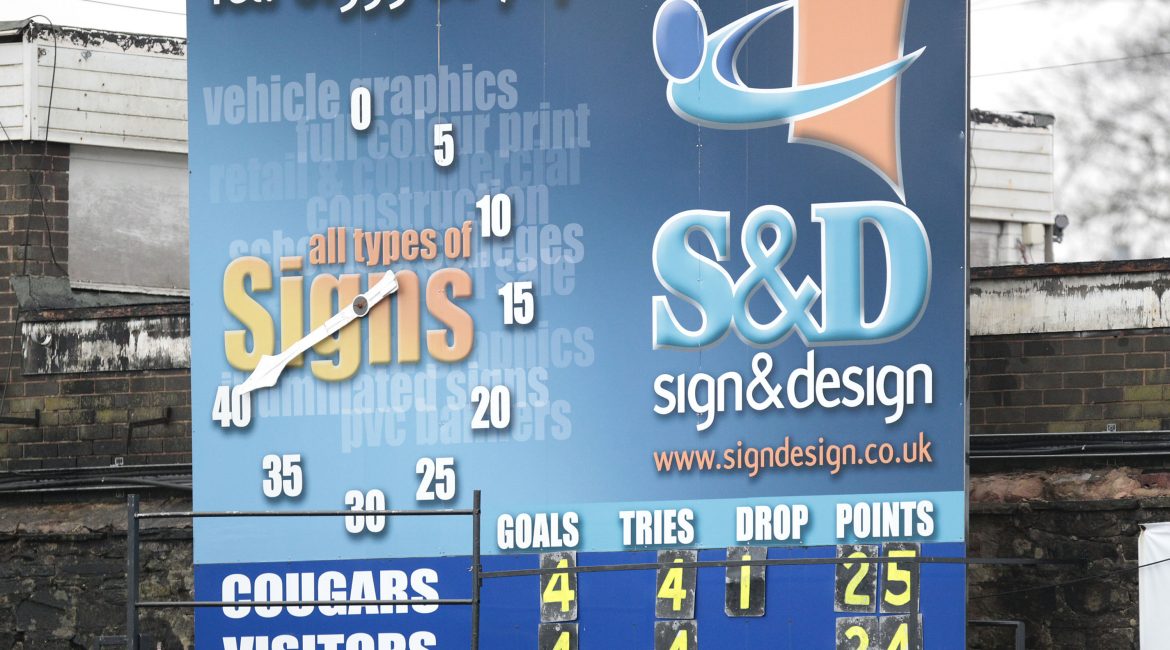 Tomorrow’s game marks 370 days since the Keighley Cougars last took to the field, falling to a 29-14 defeat on the road at the hands of Rochdale Hornets in front of the OuRLeague cameras.

On a miserable day at Spotland, first half tries from Jack Miller and Jake Webster saw the Cougars only trail by four points heading into the half-time break after an evenly contested first half in the rain and mud.

However, an ill-disciplined performance in the second half would follow for Rhys Lovegrove’s side, and despite a late try from Ritchie Hawkyard they would fall to a comfortable defeat in their final game before the COVID-19 pandemic hit and forced an early end to the 2020 season.

Bradford Bulls returned to the field after just short of a year of no action with a 22-26 friendly defeat at home to the Swinton Lions last weekend.

The Bulls dominated early proceeding as Brandon Pickersgill opened the scoring from a Matty Dawson-Jones break, before both George Flanagan and Ross Oakes were denied by staunch Swinton defence.

Despite Jordan Lilley being sent to the sin-bin for a shoulder charge, Oakes would double the Bulls advantage but Swinton got back into the game on the stroke of half-time as Jack Hansen scored on the back of a Rhodri Lloyd break.

Flanagan then scored a trademark show and go to level the scoreboard, however, Lloyd would cross for the match winning try and send Swinton back across the Pennines victorious.

History will be made however when the Cougars take to the field at the Tetley’s Stadium as for the first time in the near 121-year history of the club, a father and son will play together.

‘PLT’ is one of three trialists featuring for Lovegrove’s side, along with Keighley Albion product Josh Slingsby, recently released by Wakefield, and a familiar face to Cougars fans in the shape of Aidan Scully.

Jack Arnold will also take to the field for the first time since August 2019 after being given an amnesty from the remainder of his suspension by the RFL.

Trialist duo Anthony Walker and Brad Calland are also named by Kear as they continue to try and earn a permanent deal with the Bulls for the 2021 season.

Rhys Evans (Hamstring) returns to after missing last weekend’s game, but Sam Hallas (Hand) is ruled out through injury.

Jordan Lilley will feature with his two-game suspension as a result of being found guilty of a Grade C Shoulder Charge following the victory over Swinton last weekend not starting until next week.

WORD FROM THE SHEDS:

KEIGHLEY COUGARS HEAD COACH RHYS LOVEGROVE: “It’s really exciting that Bradford fixture, as it’s been so long since anyone played.

“It’s just good to get rugby league back and we’ve been getting the feel back for it in training.

“We need to do it correctly this weekend, and I’ve spoken to Bradford well in advance of the game just to see what their expectations are from it.

“We only get the one friendly, so we want to put the processes and plans in place that we’d have for a competitive game, with everyone getting the reps they need.

“It’s going to be exciting to play this weekend regardless, so add in the fact it’s against Bradford, and we can get stuck into a derby too.”

BRADFORD BULLS HEAD COACH JOHN KEAR: “”If you said to me we’d lose to Swinton and Keighley, but beat Featherstone in the cup, I’d take that.

“We can’t predict the future, even if we attempt to as coaches with our selections and tactics, but really it’s just been a very useful afternoon and it was great to see some rugby league at long last.

“I wasn’t bothered about the result, it was about how well we played. Some did really well and some didn’t.

“We’d have preferred to win but we didn’t. Those changes in the second half were bound to affect us, but Swinton are a good team.

“They played some lovely stuff through our middle and that’s something we have to make sure doesn’t happen against Keighley.”

Non-competitive fixtures between the Cougars and the Bulls are contested for the Joe Phillips Memorial Trophy, with the Bulls the current holders following their victory in our last meeting for the trophy at Odsal Stadium in February 2018.

Originally a trialist for the All Blacks in Rugby Union, Joe Phillips first came to Britain in 1950 following the Second World War where he was one of three trialists signed by Bradford Northern.

He played for Northern until his departure from Odsal in 1956, scoring a total of 1,469 points as a goal-kicking full back.

In 1957, Joe signed with Keighley and would score 13 tries in his first season at Lawkholme Lane.

He would remain with Keighley until his retirement in 1960, scoring 516 points in 80 appearances for the club, and would become a director of the club after hanging up his boots.

After Bradford Northern went out of business in December 1963, Joe would become heavily involved with Trevor Foster in reforming the club in the spring of 1964 and became the first chairman of the new club.

Sadly, Joe died suddenly whilst in London on business in May 1969 with the two clubs later playing each other in friendly matches for the trophy named in his honour.

The game is still available at £4.95 until Midnight, with the price then rising to £10.

To purchase the stream for tomorrow’s game, please follow this link: https://www.rugby-league.com/livestream