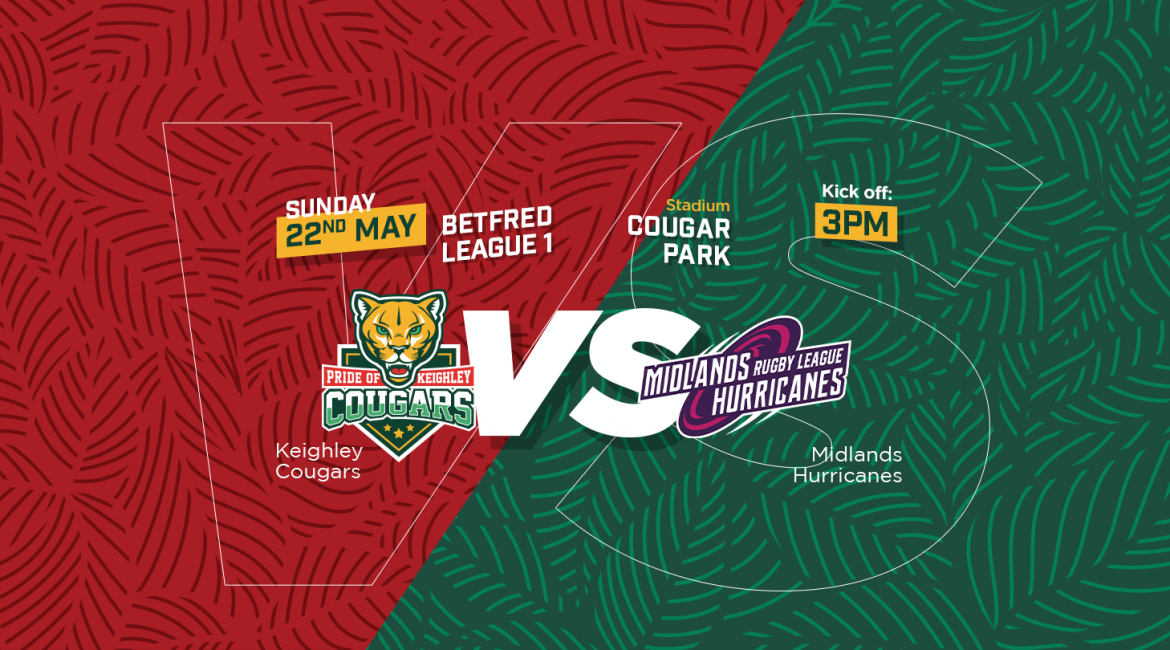 Keighley Cougars maintained the pressure at the top of the League 1 table, continuing their 100% record with a 40-16 home victory over the Rochdale Hornets.

The Cougars opened the afternoon’s scoring through a trademark try from dummy half courtesy of James Feather.

However, the Hornets would take the lead through two quickfire tries from Cian Tyrer and Lewis Sheridan.

The game would ebb and flow before Nathan Roebuck raced through a defensive line gap to level the scores, the boot of Jack Miller giving Keighley a slender lead at the break.

Two further penalty conversions from Miller would extend that lead but Rochdale levelled through Ben Killian, moments after Paul Brearley was sinbinned.

Killan himself would see yellow, reducing his side to 11 men, and this opened the floodgates for Rhys Lovegrove’s side.

Four tries in fourteen blistering minutes saw Charlie Graham, Miller, and a brace from Mo Agoro send the home side on their way to a comfortable victory.

A determined Midlands Hurricanes side fell to a 44-24 away at the Rochdale Hornets a fortnight ago.

The Hornets scored two early tries through Cobi Green and Cian Tyrer, but the Hurricanes quickly levelled the scoreboard with two scores of their own courtesy of Kieron Lawton and Jordan Bull.

Dan Nixon would put Rochdale back in front, but the visitors again levelled to go into the break even as Benn Hardcastle touched down.

However, a fast start to the second half would set Matt Calland’s side on their way to victory.

Paul Brearley touched down a Sean Penkywicz grubber before Fuifui Moimoi powered his way over from close range.

But Midlands wouldn’t go down without a fight and reduced the deficit through captain Liam Welham.

This time though, Rochdale were not prepared to squander their lead and Gavin Bennion found a way over the line.

Tyrer would then score his second try on the back of some great work from Gregg McNally before the full-back would get a try from himself with two minutes left on the clock.

Jake Webster (Groin) and Scott Murrell (Foot) are both ruled out through injury.

Dan Parker returns from suspension and comes straight back into the side.

There is also a first inclusion in the squad this season for Josh Lynam after a ten-week injury lay-off.

Midland Hurricanes interim player-coach Dave Scott has made five changes to the squad that were defeated last time out at Rochdale.

Brad Martin comes in on dual-registration from Castleford whilst there are recalls for AJ Boardman, Anthony Bowman, Brad Sheridan, and Russ Spiers.

Peter Ryan, Trae O’Sullivan, and Tom Blakey all drop out of the squad.

Sam Hall and Jack Sadler, who both featured on dual-registration from Castleford against the Hornets, are back with their parent club.

“We speak about taking each week as it comes, and every week is another opportunity for us to practice what we do and finetune those systems and processes.

“The game this week against the Midlands will be approached in the same way we’ve approached every game we’ve played so far.

“We will look at the challenges they present to us, they play a really good brand of footy, are solid defensively in the centres, and have half-backs who can pull strings with a superb kicking game.

“It is a good challenge for us but ultimately we have to execute and continue to get better at what we do.”

In fact, his first game in the semi-professional ranks was a pre-season friendly between us and the Barrow Raiders in January 2018.

His last appointment to a Keighley match came last month when he officiated the Cougars 30-0 victory against the Swinton Lions at Cougar Park.

Milligan will be assisted this weekend by touch judges Peter Brooke (Manchester) and Oliver Salmon (Huddersfield). The reserve referee is Carl Regan (Barrow).

A blistering first-half performance from the Keighley Cougars set them on their way to a 46-18 victory over the Coventry Bears in the annual Cougar Pride game.

The Cougars got off to a lightning start in front of the 1028 crowd as Charlie Graham opened the scoring after just 28 seconds before Dan Parker touched down a Jack Miller grubber in the 4th minute.

The onslaught in the opening quarter of the game continued as Mo Agoro scored on the back of a superb Taylor Prell offload, before Parker crashed his way over from close range for his second of the contest.

Agoro then scored his second, breaking down the field to touch down from 90 metres, but Coventry responded with their first score through Hayden Freeman.

It was brief rest bite for the visitors as Agoro completed his hat-trick from a long pass over the top from Billy Gaylor.

Jack Miller added his name to the Cougars scoresheet as he forced his way over, but the Bears scored on half-time as Dan Coates touched down from a Reece Rance grubber.

The second half was a dull affair compared to the first, the Bears scoring early in the half through Brad Clavering.

Taylor Prell was placed in the sinbin, but the man disadvantage didn’t go against the Cougars as Ryan Wright scored with two minutes left on the clock to put cherry on the top.