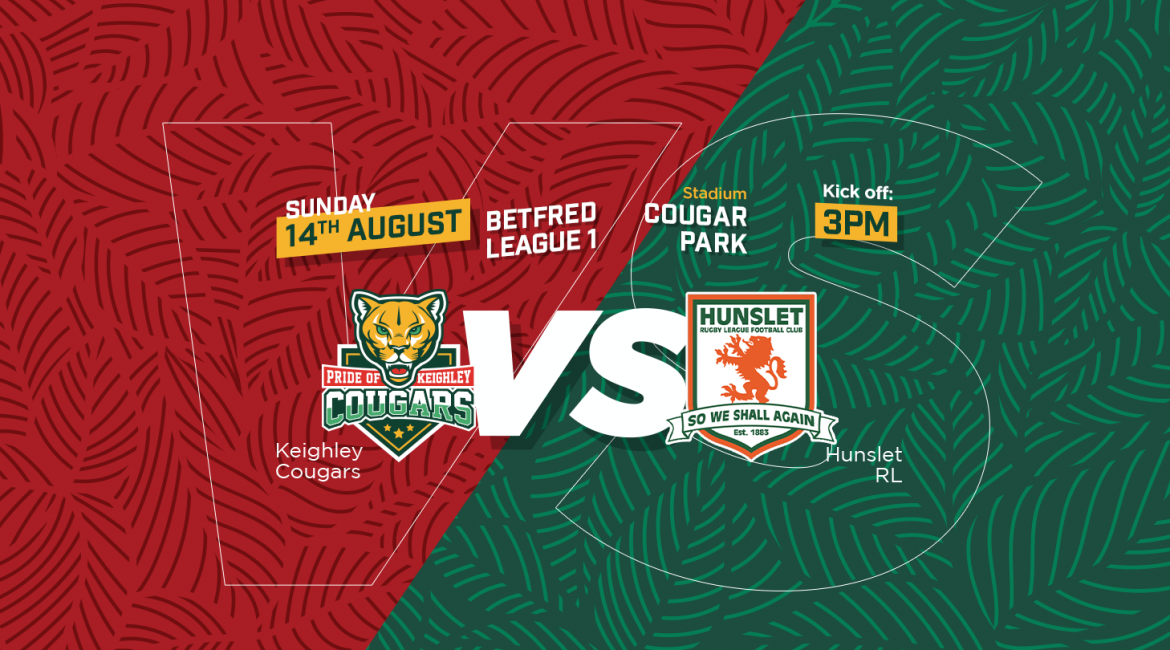 The Keighley Cougars maintained their unbeaten record after coming from behind to defeat the Swinton Lions 22-26 in Sale.

A penalty conversion from Jack Miller nudged the Cougars in front, but the Lions responded with 20 unanswered points.

Jordan Case went over from close range on the back of a short ball before Max Kirkbright dived home in the corner on debut after a kick on the last was spilt.

The lead was extended by a moment of individual brilliance as George Roby went from dummy half and made a mockery of the Keighley defence to race over.

And it appeared the game was beyond doubt as another spilt ball on the last allowed Lewis Else to touch down unchallenged.

However, a Charlie Graham try on half-time swung the momentum back in Keighley’s favour.

After the restart, that momentum continued as Junior Sa’u dived home in the corner, but Jack Hansen gave Swinton a two-score lead when he converted a penalty.

But two scores became two points as Brenden Santi broke the line and offloaded under pressure to send the supporting Toby Everett crashing over.

Keighley completed the turnaround, and secured the win, shortly after as Dane Chisholm broke and offloaded inside to allow Kyle Trout to sidestep the full-back and race home next to the uprights.

It was an evening to forget for Hunslet as they went down to a 0-24 home defeat at the hands of the Midlands Hurricanes.

After an even opening quarter, the Hurricanes opened the scoring through Tom Wilkinson after the home side had fumbled the ball.

The first half would be error strewn, but the visitors doubled their lead before the break as Elliot Wallis dived home in the corner.

Midlands were in dreamland after the restart as Tyler Walton extended the lead further by crashing over.

Liam Carr thought he had the home side on the scoreboard, but his effort was ruled out by a forward pass.

And frustrations boiled, allowing Ben Stead to convert a penalty before in the games closing seconds, Chris Cullimore found his way over to complete a memorable night for the Hurricanes.

Head Coach Rhys Lovegrove has made two changes to the side that defeated Swinton last weekend.

Jake Webster (Leg) and Bradley Ho (Calf) both return from injury and are recalled to the squad.

They replace Nathan Roebuck (Knee) who is ruled out through injury and Eddy Pettybourne who drops out of the squad.

Dalton Desmond-Walker (Calf) is nearing a return to full fitness, but this game comes too soon for the forward.

Hunslet Head Coach Alan Kilshaw has made four changes from the squad that was defeated in their last outing.

Harvey Hallas (Concussion), Pat Walker (Back), and Kieran Moran (Appendix), all return from injury whilst Josh Jordan-Roberts is back in the squad following a suspension.

Oli Burton and Josh Milthorpe are both back with their parent club Batley with Sion Jones ruled out through injury.

Matty Stableford, who departed the club earlier this week, is the other player to drop out of the squad.

KEIGHLEY COUGARS HEAD COACH RHYS LOVEGROVE: “This game will be something slightly different from the win at Swinton last weekend.

“Hunslet have some superb individual players such as Wayne Reittie and Matty Beharrell, who knows this place like the back of his hand.

“He provides a threat with a really good kicking game and the forwards will come alive on the back of that and try crash their way over.

“There will be a lot of players in this Hunslet team looking for a big game, so we need to be prepared for that.

“This is a different sort of animal to what Swinton were.

“Swinton are very similar to us whereas Hunslet are more traditional in they are more direct, big, trying to create offloads for one-on-one collisions to allow themselves to crash over.

HUNSLET RL HEAD COACH ALAN KILSHAW: “Every team seems to be doing it tough at the minute and we have a lot of players with bumps and bruises.

“However, we have had a few returning to full training to boost the squad, which is timely as it seems like, at the minute, we get a couple back and lose a couple.

“We are hopeful Oli Burton will return before the end of the season.

“Batley have been great with us all year but have injuries to hookers, which presents him with an opportunity to play Championship football this weekend.

“And we have two quality nines in Harvey Whiteley and Cam Berry, who have played regularly all season, which gives us depth in that position.”

This Sunday’s game will be officiated by Mike Smaill of the Leigh Referee’s Society.

Originally from New Zealand, Mike began refereeing Rugby Union in his homeland before switching codes to Rugby League after moving to Australia.

Impressing in his new home, he was awarded the New South Wales referee’s association rookie of the year award and as a result got to officiate a 2017 international friendly between Malta and the Philippines.

Relocating to the United Kingdom ahead of the 2018 season, Smaill would quickly rise through the ranks to a Grade 1 official which saw him promoted from the community game to Championship and League 1 towards the back end of that year.

Remaining a regular in the second and third tiers ever since, the Kiwi referee works for the RFL on a full-time basis as the Match Officials Business Manager.

Mike’s last Cougars appointment came in September of last season when he oversaw our 28-14 victory away at the North Wales Crusaders in the first week of the Betfred League 1 play-offs.

The Keighley Cougars continued their unbeaten start to the Betfred League 1 season as they snatched victory from the jaws of defeat with a 16-20 triumph at Hunslet.

Hunslet raced into an early 8-0 lead through a Joe Sanderson penalty and a try from former Keighley man, Harvey Hallas.

The Cougars though would turn the tide and take a 10-8 lead with Bradley Ho and Charlie Graham both forcing their way over from close range.

However, another penalty conversion from Sanderson would send the sides level into the half-time break.

Keighley took the lead once again in the second half, Jack Miller turning his way through a tackle to ground the ball.

Hunslet though would again level the scoreboard, Wayne Reittie pouncing on a kick to the corner to touch down.

They would then take the lead through the boot of Sanderson, but with 20 seconds remaining Mo Agoro broke the line and dived over to seal a dramatic win for the Cougars.

Advanced tickets for the visit of Hunslet RL to Cougar Park this Sunday are on sale NOW.