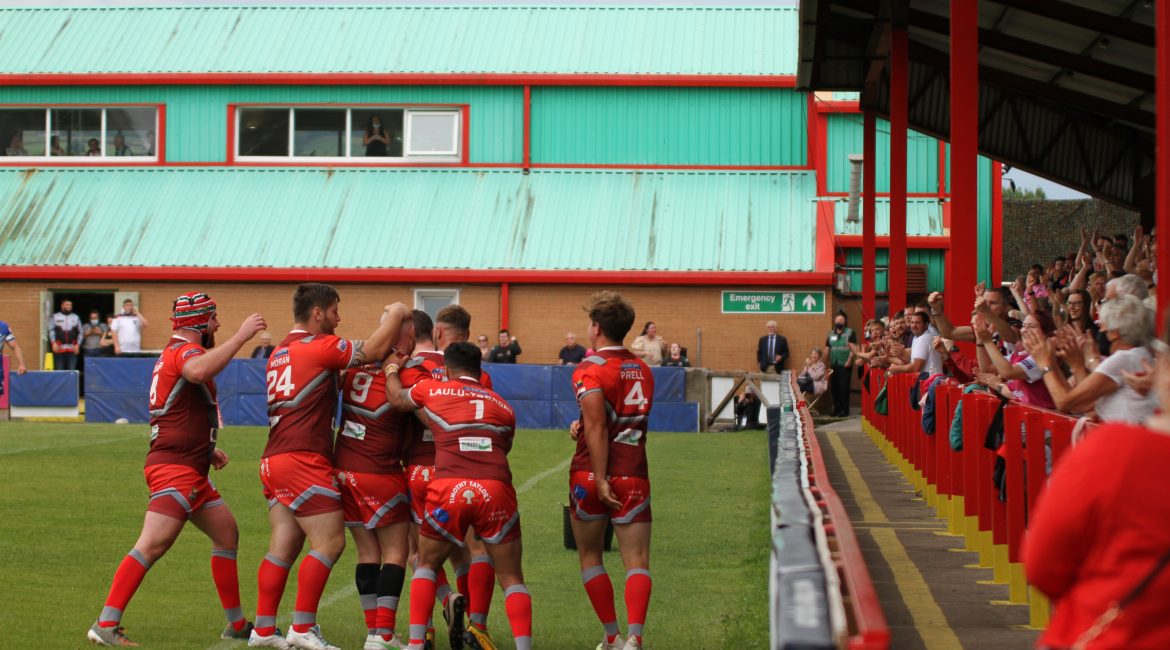 Keighley Cougars were brought crashing back to earth with a 24-18 defeat away at the Coventry Bears.

Less than a week removed from ending Barrow’s undefeated season, the Cougars were beaten by a dogged Coventry outfit that opened the scoring early in the contest through Dan Coates.

The Bears then extended their lead through Liam Welham, who stretched his way over after handing off a defender.

Keighley briefly got back into the game through Charlie Graham but two penalty conversions from Coates would give Coventry a comfortable lead heading into half-time despite a try late in the first half from Phoenix Laulu-Togaga’e.

A second try from ‘PLT’ moved the Cougars back within four points but a controversial incident saw ‘QLT’ denied a try that would have levelled up the scoreboard and the home side would take full advantage.

Darius Hamilton would power over with Sam Bowring taking advantage of the space left behind as the result of a missed interception to touch down just three minutes later.

Mo Agoro would dive over in the corner as the final hooter sounded, but it was too little, too late for Rhys Lovegrove’s team.

Hunslet RL first game since the departure of Gary Thornton saw them defeated 24-34 at home by the North Wales Crusaders.

The opening hour of the game would prove to be a horror show for the deflated Parksiders as the Crusaders raced into a 30-0 lead in West Yorkshire.

Brad Brennan, Gav Rodden, Tommy Johnson, Matt Reid, and the boot of Johnson, would send North Wales into half-time with a 26-0 lead.

A further try from Rodden extended the lead further before Hunslet threatened a comeback with four unanswered tries of their own to get within a converted try of their visitors.

Jordan Andrade would power over for the first Parksiders try with Vila Halafihi doubling their tally minutes later.

The talismanic Lewis Young would then work his way over just after the hour mark with the comeback being well and truly on with five minutes to go after Matty Chrimes scored.

However, their rally was thwarted shortly before the final hooter sounded as Patrick Ah Van touched down in the corner to seal victory for the Crusaders.

Head Coach Rhys Lovegrove has made two changes to the side that was defeated by the Coventry Bears last Friday.

Taylor Prell and Spencer Darley, who were both unavailable due to work commitments, return to the side following a week out.

Brenden Santi (Shoulder) is forced out once more through injury whilst there is no place in the 21 for Ben Stead.

A handful of players remain in the treatment room continuing their rehabilitation following injury.

These include Jake Webster (Ankle) and Bobby Darbyshire (Concussion) who are both close to returning to fitness ahead of the seasons run in.

Reece Chapman-Smith and Frazer Morris, who both joined the club from Dewsbury earlier this week, go straight into the side and are both expected to debut on Sunday.

There is also a return to the squad for Kiedan Hartley, who has been sidelined for most of the season to date with a hamstring problem.

Duane Straugheir and Dominic Brambani are both ruled out under RFL Covid-19 protocol with Simon Brown (Ribs) ruled out through injury.

Loan duo Lewis Young and Sion Jones drop out of the side that was defeated by the Crusaders, as does Joe McClean.

There is a strong former Cougars contingent in the Hunslet side with no less than five players who have represented Keighley named in the squad for Sunday.

KEIGHLEY COUGARS HEAD COACH RHYS LOVEGROVE: “I’m growing increasingly frustrated with the performances and losses we keep dishing up away from Cougar Park.

“We had a look at a couple of things that I noticed were happening at North Wales, so we thought we nipped that in the bud, but the same thing happened at Coventry.

“So, unlike we thought it was, it isn’t a physical thing it clearly is a mental thing.

“You can’t win your home games but lose your away games because that’s not how Rugby League works.

“These players need to get away from their comfort zones because it is becoming increasingly obvious that at home, they are comfortable, they are confident, they know where they are and what they are doing.

“We are below the expectations that we put on ourselves as a team, as a group, and as Keighley Cougars the organisation. It’s simply not good enough.

“We have sat down at training this week and have a look at things in a little more detail and there will be more ruthlessness shown with certain aspects of our preparation and performance.”

“We have a great squad, great infrastructure, great board and good band of volunteers.

“Everything is in place to kick on with a big game on Sunday, and I will be preparing the team the best I can to get the two points.

“My focus will be on improving our defence and on establishing what systems suit the players.

“We will take each game one at a time, but I am keen to play an exciting brand of Rugby League that will entertain the fans.”

The reverse fixture between the two sides in late May saw a pointless first half followed by the Cougars blowing Hunslet off the park in the final half hour of the contest to record a 40-0 victory.

After 51 minutes tied at 0-0 in the searing late spring heat, a try from Kieran Moran opened the scoring and from there the Cougars took full control of the match.

The next two scores for Rhys Lovegrove’s side would follow in quick succession as Jack Miller first touched down a clever kick from himself on the last tackle.

From the restart, the Cougars would break Hunslet’s line and Charlie Graham would prove to be the beneficiary as dove over on the back of a flowing team move down the field.

With the Hunslet defence now tiring, Graham broke the line and raced up the park before offloading to the supporting Brenden Santi to crash himself over.

Graham was now running the show for the home side, and he scored his second off the afternoon shortly after turning provider, sauntering over unchallenged after Miller was held up.

And Santi would wrap up proceedings as he would cross twice in the games final three minutes to complete his hat-trick and rub salt into the Parksiders wounds.

Tickets are still on sale for Sunday’s game as the Cougars head across the county for this Betfred League One fixture.

You must purchase a ticket in advance of attending the South Leeds Stadium on Sunday afternoon to gain entry into the ground.