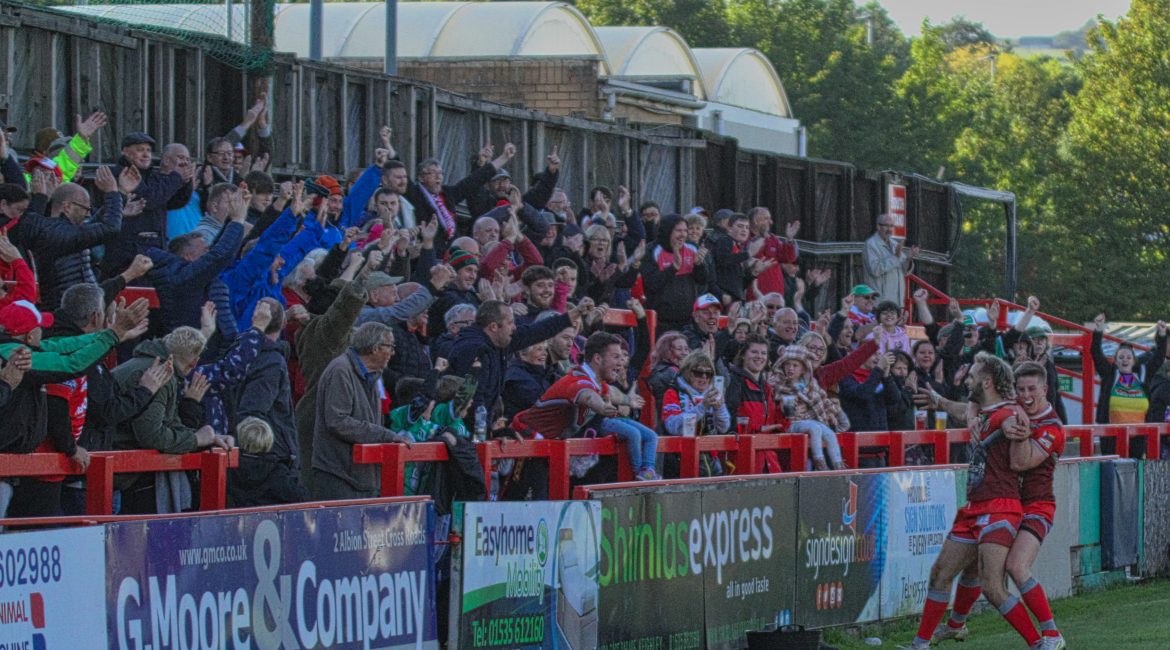 The Keighley Cougars 2021 season was brought to a heart-breaking end as they fell to defeat at the death for a second consecutive week, this time to Doncaster in the final eliminator.

The Cougars raced into an early advantage as both Jack Miller and Phoenix Laulu-Togaga’e found their way over the line.

This would be an end-to-end game and the first signs came through two quickfire Doncaster tries as Alex Holdstock and Matty Beharrell would both score to level up proceedings.

A Miller penalty conversion though gave Keighley a slender lead at the interval.

Lovegrove’s side would strike first after the restart through Scott Murrell before a length of the field effort from Charlie Graham appeared to have killed the contest off.

Liam Johnson gave Doncaster a chance with a four pointer, but after a Ben Johnston was ruled out, Jason Tali would force his way over to set-up a grandstand finish.

And that’s what those in attendance at Cougar Park got as Johnson dove over in the corner to level the scores once again before a touchline conversion from Jake Sweeting would break Keighley hearts and send the visitors to the play-off final.

After a sensational run of form to make the play-offs, Hunslet RL bowed out in the first week after being eliminated away at Doncaster.

Hunslet opened the scoring early doors as Wayen Reittie touched down a Dom Brambani kick to the corner.

Doncaster would respond though with three unanswered scores to take an 18-6 lead into the half-time break.

Sam Smeaton and Brandon Douglas would both score on the back of Hunslet errors before Liam Johnson raced through on the back of a Matty Beharrell kick.

Beharrell would make it an uphill battle for Hunslet with a drop goal before Jake Sweeting killed the contest off as he intercepted a pass and raced 90 metres to score.

Douglas would score his second of the afternoon for the Dons, but Alan Kilshaw’s side had the final say as Matty Chrimes scored to make the scoreline respectable.

Head Coach Rhys Lovegrove names six of his eight off-season recruits in his first squad of the 2022 season.

Anthony Dyne, Anesu Mudoti, Nathan Roebuck, Harvey Spence, and Lewis Young are all in line for their club debuts whilst Chris Cullimore could make his second debut for the club after returning to Cougar Park in the winter.

QLT (Calf), Matthew Bailey (Knee), and Jack Arnold (Appendix) are all ruled out through injury whilst Brenden Santi is unavailable after only returning from Australia late last week.

Robert Matamosi is cup-tied after featuring for the Army in their Round One victory a fortnight ago.

Hunslet boss Alan Kilshaw will field a new-look Parksiders side for the first time in the Challenge Cup this Sunday.

‘Killer’ has named 16 of his 22 winter recruits in his first squad of the season to mix in with a handful of familiar names.

This means 13 players will be in line to make their debuts for the club, one of which Jack Render is fit to play following recovery from a fractured ankle.

Former Cougars Harvey Hallas and Dom Horn are both named in the Hunslet squad for this weekend’s game.

KEIGHLEY COUGARS HEAD COACH RHYS LOVEGROVE: “Hunslet will be a good, tough test, and a chance to put an early marker down.

“We’ve only had two weeks of footy so far, given how deep we went in the play-offs last season, so selection for Hunslet will be medical and fitness-based first.

“We’ll also be rewarding players who are representing the culture we’re trying to create at Keighley, so things like attendance at training and what they’re eating.”

HUNSLET RL HEAD COACH ALAN KILSHAW: “By comparison with Keighley, we may be a little undercooked for the tie, given that the Cougars haven’t made too many changes to their squad from last year.

“We’ll be concentrating mainly on our own performance in the build-up, we will expect a more disciplined Keighley with and without the ball.

“And possibly some different structures in defence as Andrew Henderson has been brought in as head of rugby, his stamp on them will be clear.

“It should be a good game and both teams will be keen to progress, especially as the League 1 season doesn’t start until late March.”

This Sunday’s game will be officiated by 22-year-old Cameron Worsley of the Castleford & Featherstone RLRS.

Cameron is one of the professional games younger officials, having taken charge of his first game in Betfred League 1 at just 17 years of age.

He has since progressed to referee regularly in the Betfred Championship, also becoming a touch judge at Super League level, and was the man in the middle for the 2019 Women’s Challenge Cup Final in Bolton as Leeds defeated Castleford.

Cameron last took charge of a Keighley Cougars fixture in April 2019 when a breath-taking debut try from Taylor Prell set us on our way to victory over Doncaster at Cougar Park.

Our last meeting back in July was a sensational afternoon’s Rugby League as the Cougars came from behind to snatch a 20-20 draw at the South Leeds Stadium.

The last gasp equalising score denied Alan Kilshaw a win in his first game in charge of the Parksiders whilst ending the Cougars losing streak away from home, a run that had lasted short of two years thanks to the pandemic.

In a fiercely contested derby, the game swung back and forth throughout with a draw the fair result come the sound of the final hooter.

The Cougars started the brighter of the two sides and opened the scoring through Dan Parker, who rounded the posts on the back of a break from Jack Miller.

The visitors would extend their lead further midway through the half as Taylor Prell fought his way over on the back of clever play near the line from Aaron Levy.

The introduction of Jordan Andrade however would change the momentum of the game, the prop scoring two tries shortly before the interval to send Hunslet into the break with a two-point advantage.

Shortly after the restart, the home side would record a third try when Vila Halafihi burrowed his way over from close range.

A swinging arm on Andrade, and a further penalty for interference, allowed Jy-Mel Coleman to convert two penalty goals to take the margin between the sides to ten points.

With backs against the walls, the Cougars would dig deep, and two late tries would rescue them a point.

Charlie Graham would touch down his own grubber in the corner before an outstanding flowing move from the restart saw Dalton Desmond-Walker power his way over to rescue a share of the spoils.

Tickets for Sunday’s game at the South Leeds Stadium are on sale NOW and available to buy online.