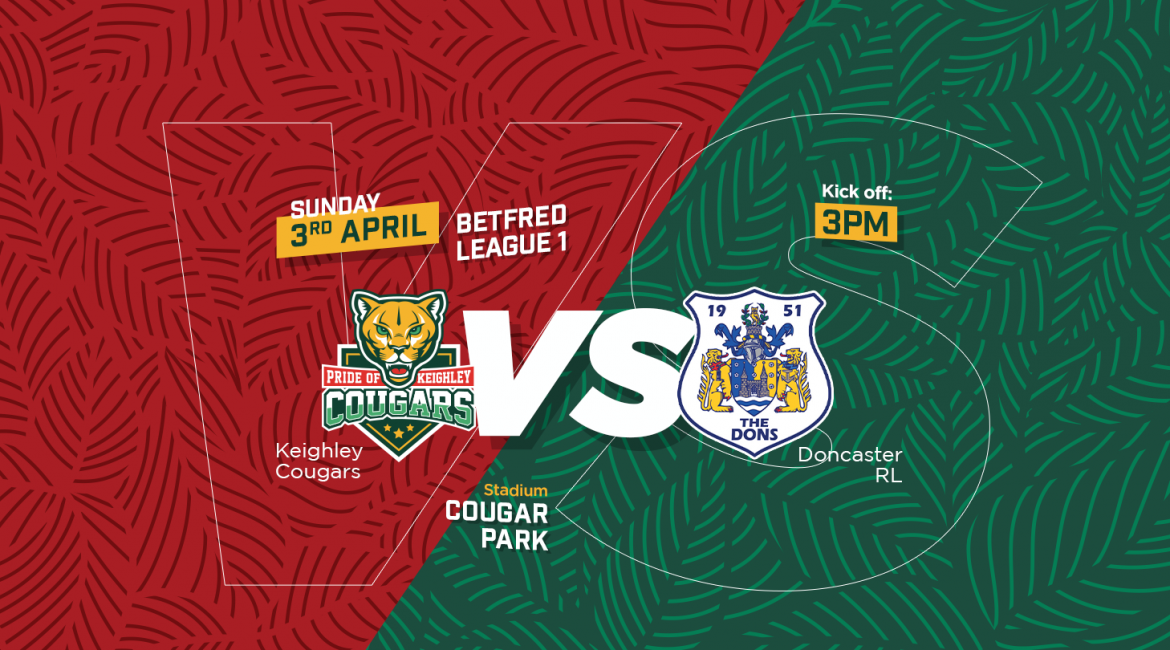 The Keighley Cougars started their Betfred League 1 season off with a comprehensive 32-6 victory away at Oldham RLFC.

The Cougars flew out of the traps and raced into an early sixteen-point lead.

Alix Stephenson opened the scoring as he dived over in the corner before Aaron Levy crashed over from close range.

From the following restart, Lewis Young went over next to the uprights on the back of a break from Brenden Santi.

A bright start to the second half saw Rhys Lovegrove’s side extend their lead further as Nathan Roebuck took advantage of an overlap to score.

However, the Cougars would score a further two tries to seal the victory.

Levy would fend off three attempted tacklers to score his second before Roebuck sealed a brace of his own as he went over unchallenged on the back of a scrum near to the line.

Despite a slow start, Doncaster RL recovered to record a 48-20 home victory over the Midlands Hurricanes.

However, the Dons turned the scoreboard round in their favour with three quick-fire tries as a Jason Tali double was followed up by a score from Connor Robinson.

Both sides were then temporarily reduced to 12 men, but the Hurricanes would make sure they only trailed by four points at the breakthrough a Phil Cowburn try.

Midlands were then reduced to 11 men, and this allowed Doncaster to take hold off the game as they scored four tries during this period.

Misi Taulapapa, Aaron Ollett-Hobson, Ben Johnston, and Jack Sanderson would cross the line in quick succession to move the Dons into a 42-14 lead.

The visitors would strike back through Sean Croston but an effort from Leon Ruan on his Doncaster debut would restore their 28-point advantage with what proved to be the final points of a busy afternoon.

Head Coach Rhys Lovegrove has made one change to the 21-man squad from last weekend.

Billy Gaylor (Concussion) is named for the first time since January’s Challenge Cup loss to Hunslet, taking the place of Keenan Dyer-Dixon.

Doncaster Head Coach Richard Horne has made one change from the 21-man squad named for last weekend’s victory over the Midlands Hurricanes.

Winger Tom Halliday returns to the Dons side and replaces Josef Fella in the squad.

Watson Boas, Ben Cockayne, and Ben Howe are all once again unavailable for the Dons.

KEIGHLEY COUGARS HEAD COACH RHYS LOVEGROVE: “As we saw last season in the play-offs, Doncaster are a well drilled side who are more than capable of beating anyone in this division on their day.

“We will have to make sure we’re switched on for the full 80 minutes to get another win today.

“They started their season well with a comprehensive win against a good Midlands Hurricanes outfit last Sunday and will be like ourselves full of confidence and looking to continue an unbeaten start today.

“We have to make sure we put in the commitment and performance levels we showed last Sunday and make sure we head into next week’s bye week with another W and two points on the board.”

DONCASTER RL HEAD COACH RICHARD HORNE: “The boys are really looking forward to it and we know we will have to raise our game from what we produced last week.

“We started slowly against Midlands and we can’t afford to be giving Keighley a start because they will punish us.

“Keighley defended really well at Oldham which helped them get a result, so it won’t be easy if we hand them an early lead.

“We showed at the weekend that our fitness levels are good, if anything we got stronger as the game went on so we know if we stay in the game we’re a threat.

“Any team in the competition can post points if you give them an opportunity, so we have to be clinical when coming away from our own line.”

This Sunday’s game will be officiated by 32-year-old Scott Mikalauskas from the Leigh Referee’s Society.

The Keighley Cougars 2021 season was brought to a heart-breaking end as they fell to defeat at the death for a second consecutive week, this time to Doncaster in the final eliminator.

The Cougars raced into an early advantage as both Jack Miller and Phoenix Laulu-Togaga’e found their way over the line.

This would be an end-to-end game and the first signs came through two quickfire Doncaster tries as Alex Holdstock and Matty Beharrell would both score to level up proceedings.

A Miller penalty conversion though gave Keighley a slender lead at the interval.

Lovegrove’s side would strike first after the restart through Scott Murrell before a length of the field effort from Charlie Graham appeared to have killed the contest off.

Liam Johnson gave Doncaster a chance with a four pointer, but after a Ben Johnston was ruled out, Jason Tali would force his way over to set-up a grandstand finish.

And that’s what those in attendance at Cougar Park got as Johnson dove over in the corner to level the scores once again before a touchline conversion from Jake Sweeting would break Keighley hearts and send the visitors to the play-off final.

Tickets are priced at £15 for Adults, £12 for Concessions and FREE for Under-16s.