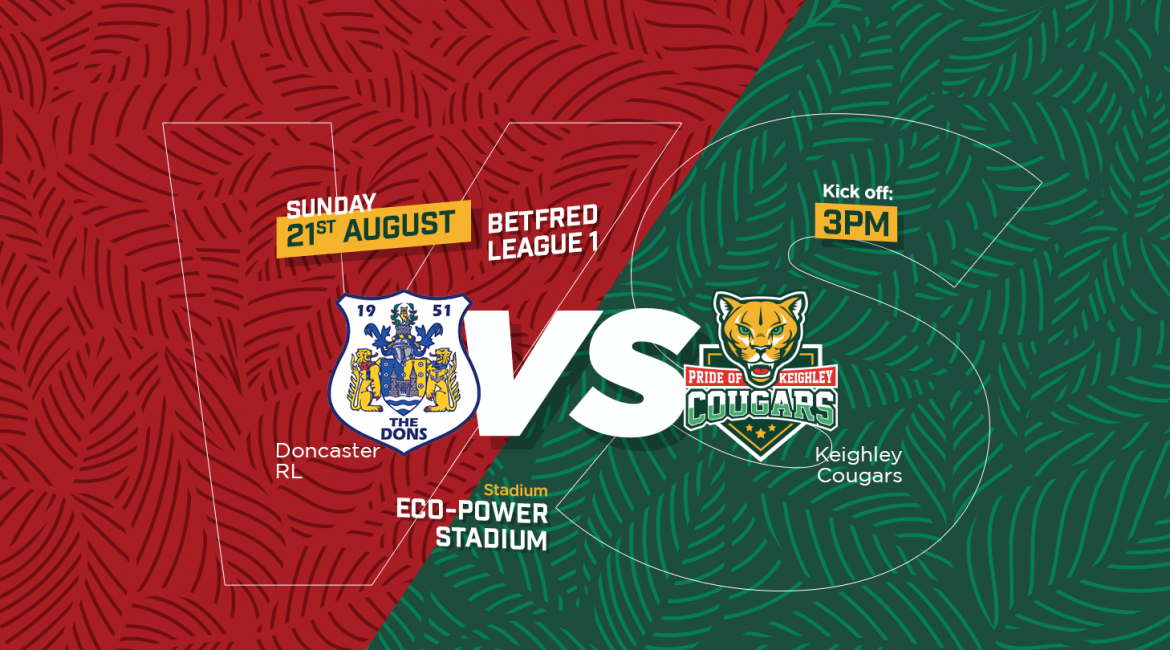 The Keighley Cougars moved within one point of promotion with a 60-18 home thrashing of local rivals Hunslet RL.

The Cougars started brightly through tries from Jack Miller and Mo Agoro, but Harvey Hallas would keep Hunslet within a score.

However, the sinbin of Matty Beharrell would see Keighley run in four tries during his absence.

Matthew Bailey and Billy Gaylor both scored rare tries with Alix Stephenson contributing with a double.

With the sides now level at 13-men apiece, the Cougars would continue to keep the scoreboard ticking over.

Junior Sa’u and Charlie Graham both powered over from close range with Stephenson completing his hat-trick shortly after.

Hunslet though would find two consolation scores as Macauley Hallett and Jordan Paga both found the line.

A yellow card for Dane Chisholm would do nothing to dampen Keighley spirits as James Feather rolled back the years to put the icing on the cake with a superb solo effort.

In sweltering conditions, Doncaster RLFC recorded a 18-52 victory away from home against the Midlands Hurricanes.

The Dons would open the scoring within the games opening minute courtesy of Leon Ruan with further tries shortly after from Connor Robinson and Watson Boas ending the game as a contest early.

Kieron Lawton would get the Hurricanes on the board after his teammate George Collins was carried from the field.

But two early tries in the second half for Doncaster through Greg Burns and Jason Tali gave the visitors breathing space.

Midlands threatened to get back into the arm wrestle with two tries from Brad Clavering and Matt Welham.

However, the visitors eased their way to the finish line with Hurricanes bodies depleted as a further two tries from Boas, another score from Tali, and a Tom Halliday effort wrapping things up for Richard Horne and his team.

Head Coach Rhys Lovegrove has made one change to the squad that defeated Hunslet last weekend.

Eddy Pettybourne, who missed out last week, is recalled in the place of Kyle Trout (Tricep) who has been ruled out through injury for the remainder of the season.

The pair of Kyle Kesik and Dane Chisholm, who were suspended yesterday, are available as their bans do not begin until next weekend.

New signing Elliot Hall, who joined this week on loan from Bradford, comes straight into the squad.

He is joined by Ben Johnston and Jack Sanderson, both of whom return to the squad after not featuring last weekend.

Joe Fella, Ben Howe, and Aaron York are the three players who drop out from last week.

KEIGHLEY COUGARS HEAD COACH RHYS LOVEGROVE: “For me, Doncaster are in the in-form team in the competition.

“They have got a lot of threat and always come good at this end of the year.

“We know the quality that Doncaster hold and obviously with the size of the pitch at the Eco-Power Stadium it is important that we tidy a few things up defensively.

“So if we stick to systems and process then we will hopefully put in a performance that will keep us in the mix.”

DONCASTER RLFC HEAD COACH RICHARD HORNE: “We were completing at 50% in the first half, and then up at 93% in the second which is why we managed to build a good lead.

“We scored early tries but our own effort gave them encouragement. Midlands are a team that are dangerous when you give them a chance.

“Overall it is a win and another two points, but there is no doubt that we can’t afford to be dipping in our performances at this stage of the season.”

This Sunday’s game will be officiated by Scott Mikalauskas from the Leigh Referee’s Society.

When these two sides met in the reverse fixture back at Cougar Park in April, Mikalauskas was the official that afternoon also.

The Keighley Cougars made it two wins from two at the start of their Betfred League 1 season with a 26-6 home victory over Doncaster at Cougar Park.

Keighley opened the scoring through Alix Stephenson but would squander several chances to extend their lead.

However, they found another breakthrough shortly before the interval as Charlie Graham turned through a tackle to fight his way over from close range.

Outstanding Cougars defence kept Doncaster at arms-length, and they would kill the game off with two quickfire tries.

Lewis Young rounded the posts on the back of a Jack Miller short ball before Nathan Roebuck dived home in the corner.

Doncaster did make sure they avoided being nilled on the scoreboard as Ben Johnston went over from dummy half.

However, the final say went to the Cougars as Jake Webster crossed over on the back of a Mo Agoro break inside from his wing.

Advanced tickets are on sale ahead of Sunday’s visit to the Eco-Power Stadium.

You can buy tickets by clicking HERE

Pay on the day upon arrival at the ground is also available but adult ticket prices rise by £2 to £15 for Adults.