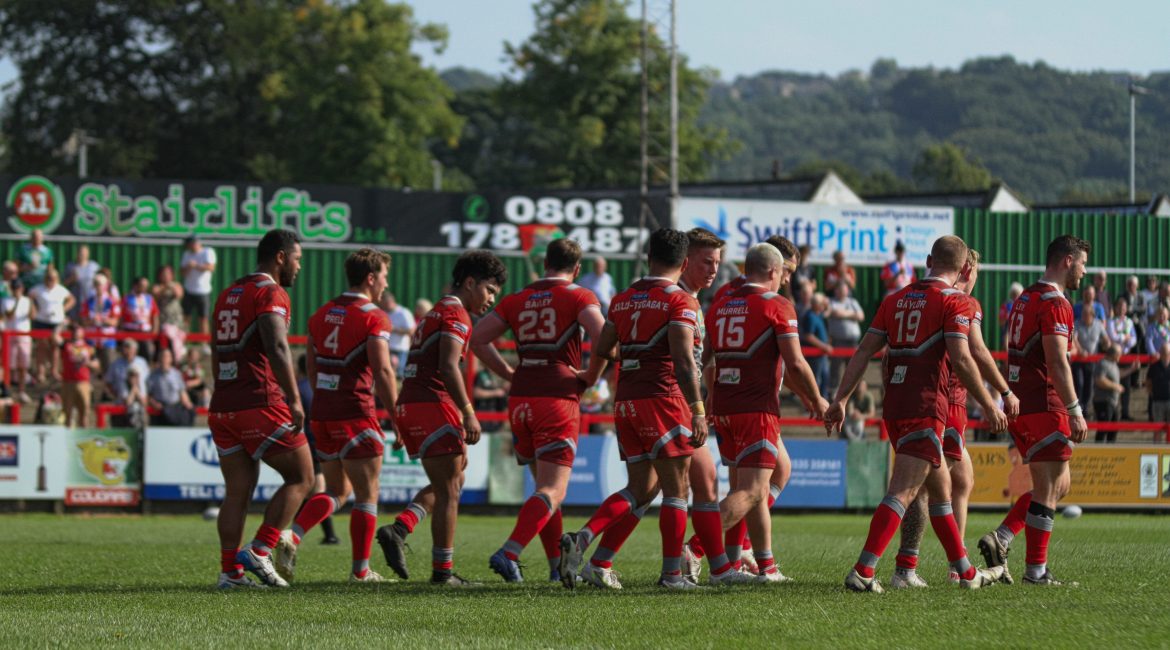 A sensational second half performance saw the Keighley Cougars secure a top six finish with a 34-14 victory over the North Wales Crusaders at Cougar Park.

The first half was a fiercely contested forty minutes of Rugby League that saw momentum swing back and forth between the sides.

However, the Crusaders would move into an 8-0 lead with a Gav Rodden try being quickly followed by a Tommy Johnson penalty conversion.

But the Cougars would only trail by two at the interval with Scott Murrell racing onto his own chip over the top to touch down.

It appeared early in the second half that the Crusaders would extend their winning run as Brad Brennan crashed over from close range.

Keighley though would respond with a breath taking final 25 minutes that saw them run in 28 unanswered points to storm to victory.

Jake Webster would first power over to get his team back into the arm wrestle with Taylor Prell putting the Cougars into the lead, reacting quickest to a Johnson error from an early kick in the tackle count by Jack Miller.

QLT would be next to score with Alix Stephenson then blowing the roof of Cougar Park as he rounded three defenders to dive over on the back of a break from Prell.

Dan Parker then put the icing on the cake as he dived over seconds before the sound of the final hooter.

Doncaster RL continued their upturn in form as they ground out an 18-13 home win over the Coventry Bears.

In a game where chances we few and far between, Coventry took a 13-12 lead into the half-time interval.

Doncaster opened the scoring as Jason Tali raced in under the crossbar, but the Bears levelled the scoreboard back up quickly as Dan Coates raced onto his own grubber kick to touch down.

The try put life back into Coventry and they would take the lead during their period of resurgence as Kadeem Williams exposed a gap in the defensive line to race through and cross the line.

The Dons though would draw level as Tali scored his second of the afternoon, showing great hands and strength to fight his way over in the corner.

But a drop goal from Coates would send the visitors into the break with the advantage.

The second half would prove to be a drab affair with a 64th minute try from Liam Johnson the only points of the half, however, it would prove to be the winning try that would carry Doncaster to a third consecutive victory.

Head Coach Rhys Lovegrove has made just the one change for the side that defeated the North Wales Crusaders last weekend.

Mo Agoro (Groin) returns to the side following a month on the sidelines through the injury he sustained in last month’s Cougar Pride game.

He takes the place of Josh Slingsby who drops out of the squad from last week.

Robert Matamosi (Work Commitments), Wellington Albert (Ankle), and Bobby Darbyshire (Concussion) are all ruled out long-term for the Cougars.

Doncaster Head Coach Richard Horne has made two changes to the side that defeated the Coventry Bears last Sunday.

Ryan Boyle, who missed the victory over the Bears, returns to the side with winger Sam Doherty also returning to the side.

Ben Johnston and Danny Bravo are the two players who miss out from the game against Coventry last time out.

There is a strong former Keighley contingent in the Doncaster side with Ross Peltier, Zach Braham, and Aaron Ollett all named by Horne.

KEIGHLEY COUGARS HEAD COACH RHYS LOVEGROVE: “Everything is huge now and we’ve got to continue building towards these big games.

“There are a few things that we still need to work on as they aren’t ready yet, we saw them in glimpses against West Wales and North Wales, but especially for games such as this one against Doncaster.

“It is really important also that we’ve got key players back as we’ve got to peak in these final games and then the play-offs.

“What I don’t want to happen is we do stuff outside of the processes and we build into the system and into this run in we are now facing.

“It is all about the performance and the result now in this trip to Doncaster.”

DONCASTER RL HEAD COACH RICHARD HORNE: “We didn’t reach the heights of the past couple of weeks and that is why it became scrappy against Coventry.

“They were poking their nose through after contacts and putting pressure on us, but we found a way to win.

“I’m happy we’ve got the two points and won in a different way, because that’s what you have to do in the business end of the campaign.

“We had used a lot of energy up in the past two games so perhaps that has taken a lot out of us.”

The reverse fixture between these two sides has been a long time coming with the Cougar Park meeting taking place way back in May on the opening day of the season.

The Cougars last home game behind closed doors would see them start the season with a win.

Keighley started the afternoon brightly, QLT opening the scoring after being the quickest to react to a kick over the top from Scott Murrell.

Matty Beharrell was then sin-binned for the Dons, but his absence would not deter the visitors as they scored twice in his absence.

Kieran Cross first burrowed over from close range before Liam Johnson crossed in the far corner.

A length of the field interception from Charlie Graham brought the Cougars back to life and they took the lead into the half-time break as Aaron Levy crossed from close range.

The Dons levelled just after the break as Beharrell reacted quickest to his own kick to score.

But a headbutt in the tackle that led to blows being exchanged, and sin bins for both Ben Johnston and Jake Webster, would change the game and lead to one way traffic from Rhys Lovegrove’s side.

Alfie Seeley dove home in the corner after Dan Parker was held up moments before Jack Coventry crashed over from close range after spotting a gap in the defensive line.

Brenden Santi would be next to add his name on the scoresheet, taking advantage of Johnston’s lack of concentration as he allowed a kick from Murrell to bounce.

And the Cougars then finished with a flourish as QLT broke the line twice to put tries on a plate for Jack Miller and Graham.

Tickets are still on sale for Sunday’s game as we make the trip to the Keepmoat Stadium to face Doncaster RL in the final game of the regular Betfred League 1 season.

You can still purchase a ticket in advance of attending the Keepmoat on Sunday, with a pay on the day option also available for supporters yet to purchase their tickets.

Please be aware that there is a £3 price increase for tickets purchased on the day of the game and not in advance.