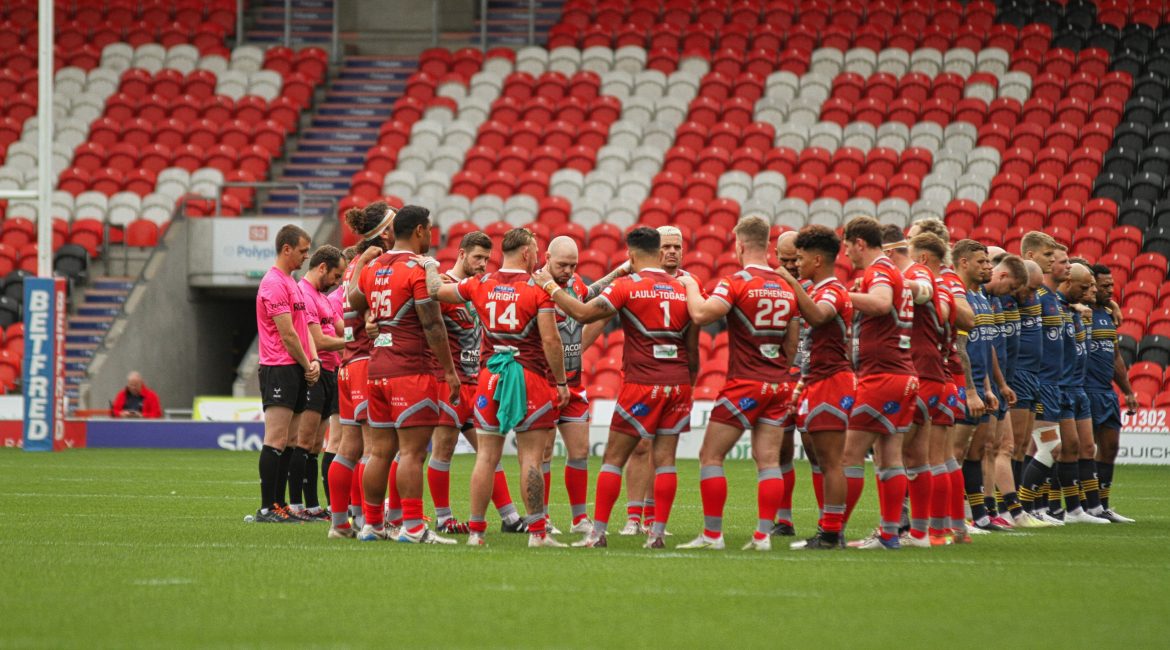 The Keighley Cougars were defeated 18-16 by Workington Town after Golden Point Extra Time in the qualifying play-off semi-final.

The Cougars got off to a slow start, as a first half strewn with errors and penalties allowed Workington to take a ten-point lead into the interval.

Town opened the scoring inside three minutes as Caine Barnes forced his way over on the back of a knock-on.

The Cougars though got back into the game quickly, as Alex Young dropped the ball under pressure with Jack Miller touching down the loose ball to level the scoreboard.

Workington would retake the lead through Brad Holroyd as the full-back took advantage of a melee in back play to stroll through the space in front of him and dive over.

Another error would allow the home side to pressure line, and Barnes scored a second of the afternoon as he made the most of a missed tackle to turn over.

The second half was a tense affair, and Keighley got themselves back into it through Charlie Graham as the centre raced over after Miller had created a gap within the host’s defensive line.

And with just over a minute remaining on the clock, a kick in the air caused chaos allowing Kyle Kesik to touch down and send the game into golden point extra-time.

However, just minutes into the extended period, a penalty for a high tackle allowed Carl Forber to convert and win the game, and home advantage in the Grand Final, for Workington.

Doncaster RL continued their push for promotion in the play-offs with a breath-taking 34-48 victory away at the North Wales Crusaders in the elimination semi-final.

The Dons were dominant in the first half and took a twenty-four-point lead into the half-time break.

Liam Tindall and Aaron Ollett-Hobson both scored within the games opening seven minutes to put the visiting side on their way.

The visitors pack then began to dominate the game and got their just rewards through another two quickfire tries as Ross Peltier and Brandon Douglas crossed the line.

The game then appeared over shortly before the half-hour mark as Ben Cockayne was the quickest to react to his own kick in order to score.

The Crusaders though did give themselves a glimmer of hope shortly before the sound of the hooter as Callum Hazzard found a way over.

This sparked life into North Wales and in the second half, they threatened the unlikeliest of comebacks.

Brad Brennan powered over for the home side though the Dons seemed to have thwarted any attempts to get back into the game as Jason Tali and Matty Beharrell both scored in quick succession.

The home side though wouldn’t go down without a fight and went through a sensational period of play where they would run in 22 unanswered points.

Jordan Gibson, Ben Morris, and Tommy Johnson would all cross for an unprecedented three tries in six minutes.

The comeback then appeared to be on when Gav Rodden found a way through on the back of a Matt Reid break.

Doncaster though showed resilience and would get the try they needed to see the win home with comfort as Jake Sweeting found a way over to break Crusaders hearts.

Quentin Laulu-Togaga’e (Knee) is ruled out through injury and is expected to miss what is left of the 2021 season.

He is replaced in the squad by Jack Coventry (Knee) who returns from the injury he sustained in last month’s victory over Sunday’s opponents.

Con Mika has been cleared to play after illness forced his late withdrawal ahead of the defeat to Workington.

Doncaster RLFC Head Coach Richard Horne also makes one change to his side ahead of the trip to Cougar Park.

Zach Braham (Ankle) returns to side after missing last Sunday’s win away at North Wales through injury.

He takes the place of Hull KR loanee Anesu Mudoti, who misses out on the short journey north.

There is a strong former Keighley contingent within the Doncaster ranks, with no fewer than four in the Dons side.

KEIGHLEY COUGARS HEAD COACH RHYS LOVEGROVE: “You know exactly what you sign up for when you get into the play-offs and the drama that has unfolded for both us and Doncaster in the first two weeks show exactly what it is all about.

“It is about how we re-group from the disappointment from last weekend now and make sure we give ourselves the opportunity to wrong those right.

“Doncaster themselves know what it is like to being on the receiving end of one of our comebacks after our meeting three weeks ago and we know they will be using that as one of their points of motivation today.

“They have also shown how dangerous they are in attack with the points they have scored against Hunslet and North Wales in their two play-off fixtures to date.”

DONCASTER RLFC HEAD COACH RICHARD HORNE: “The boys are working so hard, and you can see how much it means to every single one of them.

“It’s a huge game now against Keighley and we’ll do what we can to make sure the boys are ready for it.

“The supporters were fantastic and helped us in getting through what ended up being a testing second-half.

“I think the team showed the fans how much it means and to have them here made it extra special.”

A dramatic final ten minutes saw the Keighley Cougars snatch a 28-26 victory from the jaws of defeat away at Doncaster.

The Dons came firing out of the blocks and went 12-0 inside the game’s opening six minutes through tries from first Ollie Greensmith, and then Tom Halliday on the opposite wing.

However, a 17th minute red card for Ben Cockayne reduced the home side to twelve men and allowed Keighley back into the contest.

And they found that way in through Jake Webster, the veteran reacting quickest to a Kyle Kesik grubber.

But Doncaster extended their lead to eight points from the boot of Jake Sweeting after the Cougars were penalised.

The gap at the interval though would be just two points as Con Mika marauded his way over with an unstoppable run from 10 metres.

It appeared though that despite the man disadvantage that Doncaster would find the win.

Two errors in defence from the Cougars led to two tries as Jake Sweeting took advantage of a knock-on and an interception to score.

Then came the grandstand finish by the visitors, started by Webster as he went through a gap in the defensive line to touch down.

The gap was then once again closed to two points from the restart as Taylor Prell broke through two attempted tackles to race over beneath the crossbar.

And with four minutes left on the clock, the sealed victory as Phoenix Laulu-Togaga’e dived over in the corner.

Tickets purchased online in advance of the day are priced at £13.50 for Adults, £8.50 for Concessions, and FREE for Juniors.

Tickets purchased on the day upon arrival at Cougars Park are priced at £15 for Adults, £10 for Concessions, and FREE for Juniors.