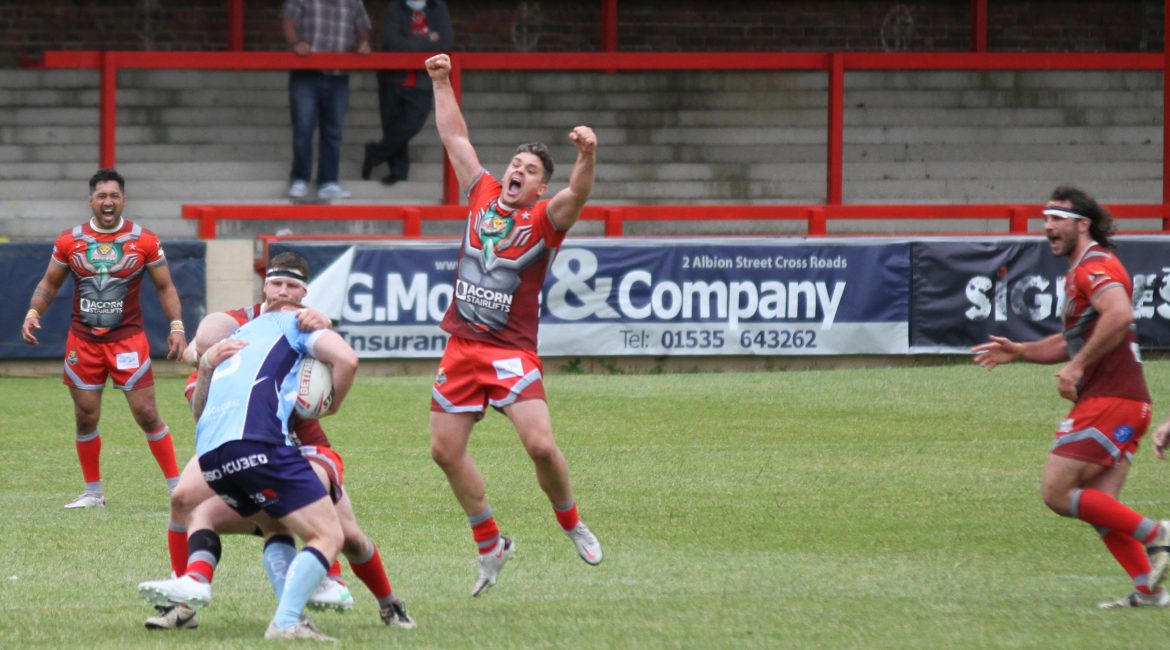 Despite having their backs against the wall in the build-up, the Keighley Cougars dug deep to record a 34-22 home victory over the London Skolars.

The Skolars opened the scoring early through a Tom Firth effort at dummy half, but the Cougars rallied to take the lead.

Josh Slingsby brought the hosts back within two points through an excellent diving effort in the corner before champagne Rugby League from Scott Murrell and Dan Parker but six points on a plate for QLT.

The visitors however would re-take the lead after they kept the ball alive on the last tackle and Lameck Juma stepped through a tackle to touch down.

But a penalty following a knock-on presented Keighley with field advantage and the quick thinking of Jack Miller near to the line would send the Cougars into half-time with a lead they would not surrender.

Skolars ill-discipline would prove to be the factor as Miller would convert two penalty goals either side of a try from Brenden Santi.

A further Santi try on the back of breaks from both Mo Agoro and Aaron Levy put the Cougars out of sight, but London threatened a comeback late on as Dalton Grant and Juma both managed to touch down.

However, Mike Greenhalgh would be sin-binned for a late tackle on PLT allowing Miller to take another two points and seal the victory for Keighley.

North Wales Crusaders put in a much-improved performance from the week previous against the Rochdale Hornets, but were still defeated 38-28 at the Crown Oil Arena.

Rochdale would race into a 20-6 lead as Rangi Chase shined on debut for the Hornets in the game’s early stages.

Tries from Lewis Sheridan, Dan Nixon, Danny Yates, and Luke Fowden for the Hornets were met in reply through a lone effort from Gav Rodden.

But, once Chase was forced from the field with a broken arm, the Crusaders worked their way back into the game to only trail by two points at half-time with Rob Massam and Connor Aspey both touching down.

The arm wrestle would go both ways in the second halves opening minutes, but Rochdale moved further in front as Fuifui Moimoi and Yates both crossed within the space of five minutes just after hour mark.

Chris Barratt scored to keep the Crusaders within touching distance of their hosts, but Moimoi’s second ended the game as a contest.

Massam’s own second try would prove nothing more than a consolation for Anthony Murray’s side.

Head Coach Rhys Lovegrove welcomes back six players into his 21-man squad for the trip across the border.

Charlie Graham, Ryan Wright, Matthew Bailey, Jack Coventry, Spencer Darley, and Jason Muranka all return to the side after being stood down by the RFL under Covid-19 protocols.

Billy Gaylor (Shoulder) and Robert Matamosi (Concussion) have both been cleared to play by the medical department and are also named by Lovegrove.

Jake Webster (Ankle) and Aidan Scully (Shoulder) are ruled out through injuries picked up last weekend against the Skolars and join Bobby Darbyshire (Concussion), Wellington Albert (Ankle), and Alix Stephenson (Leg) on the sidelines.

North Wales Crusaders Head Coach Anthony Murray has named a 20-man squad for the visit of the Cougars.

Following the loss to Rochdale last time out, Andy Ball, Cam Brown, and Jack Cottington all miss out this weekend.

Coming into the Crusaders squad in their place are the duo of Dante Morley-Samuels and Brad Calland.

Tyme Dow-Nikau is unavailable as he serves the second of a two-match suspension whilst there is a familiar face in the North Wales ranks in the shape of former Cougars loanee Ben Morris.

Karl Ashall will make his 200th career appearance this Sunday.

KEIGHLEY COUGARS HEAD COACH RHYS LOVEGROVE: “The issue is that we are so used to being in and around Cougar Park, when we do play away from home we tend to struggle.

“We have yet to win a game on the road, so it is really important that we start to get those victories away from Cougar Park.

“The Crusaders pushed Rochdale really close last week, they come out of back field in yardage really well and have arguably the two best ball carrying wingers in the division, so we need to do a job on them.

“But ultimately we need to get some continuity in both training and on gamedays, take another step forward in our performances, and then go out there and push for a performance that will get us a win.”

NORTH WALES CRUSADERS HEAD COACH ANTHONY MURRAY: “We played well and matched them, but we just need to be a bit more clinical on those last tackle plays.

“We didn’t always end our sets well enough, gave away some seven-tackle restarts and they punished us.

“When we get into those good positions, we need to finish better, be a bit more clinical and build pressure on the opposition’s line.

“There wasn’t a lot in the game at all and we had two tries disallowed.

“We’ve come up with some positive responses lately against Coventry and West Wales and we need to do the same on Sunday.

“We need to keep in those high margins of completion that we’ve been in over the last couple of weeks as we’ll be compete with any team in this division.

“Our fans are our 18th man and it’d be great to see a decent crowd watching us.

“It’ll be tough against Keighley as they’ve signed a host of experienced players and started the season well, but our fans always give us that extra push.”

The last meeting between these two clubs came on a scorching hot afternoon in Wrexham back in June 2019 as the North Wales Crusaders defeated the Keighley Cougars 14-6 at the Queensway Stadium.

A real war of attrition was played out in swelting conditions, but the Crusaders did just enough to see of their visitors and take the two points on the afternoon.

Both sides had early opportunities to score but Matt Welham knocked-on for the Cougars with Joe Ryan being held up for the Welsh outfit.

The Cougars opened the scoring midway through the first half when on the back of clever play at the scrum, Taylor Prell managed to find space to break down the wing and race 60 metres to touch down.

However, the Crusaders would rally and take a two-point lead into the half-time interval.

Earl Hurst would level the scores after taking advantage of a missed tackle near to the line with Ben Stead converting a penalty to nude the men from across the border in front.

The start of the second half proved a nightmare for one for Lovegrove’s side as the restart went out on the full, and from the penalty North Wales worked their way down the park to allow Karl Ashall to crash his way over from dummy half.

They would be the final six points of the afternoon as the heat sapped the players energy and the game became scrappy.

Welham would be denied twice in the corner however for the Cougars, with Prell bundled into touch, whilst Matt Reid saw his late effort for the home side disallowed for a forward pass.