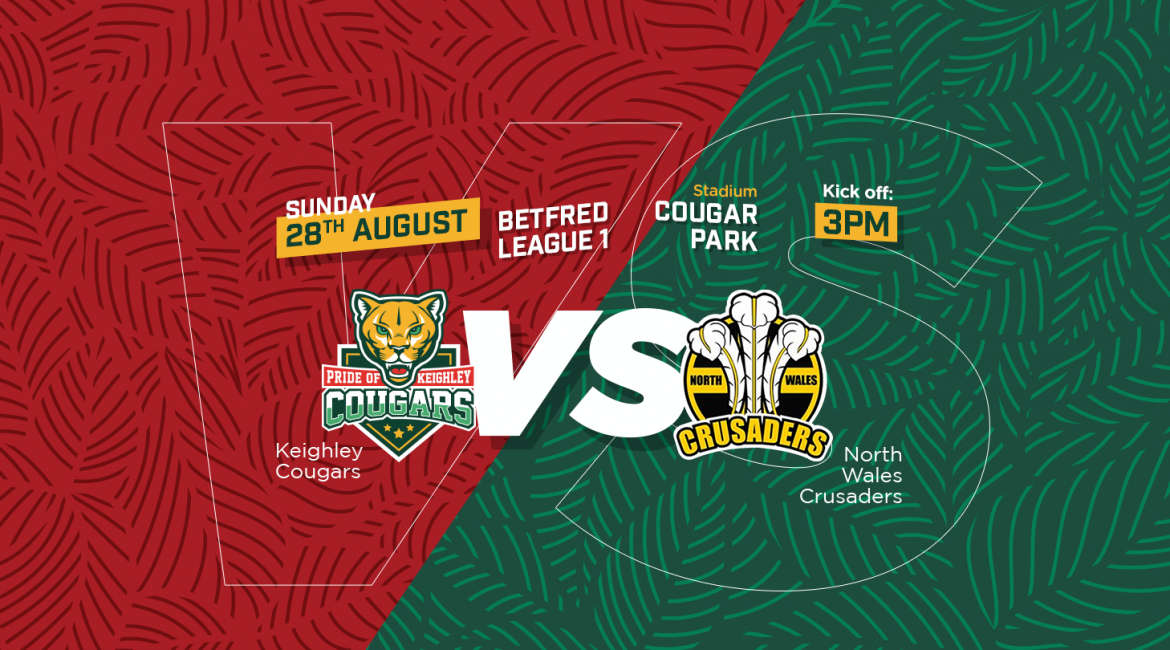 The Keighley Cougars secured promotion to the Championship with a 48-18 victory away at Doncaster RLFC.

The Cougars came flying out the traps and took a 24-0 lead into the half-time interval.

Junior Sa’u would open the scoring on the back of a line break from Lewis Young.

And another break from Young led to another try, Jack Miller this time the beneficiary.

Brenden Santi powered over for his first of the season with Young going the length of the field from a loose ball on the sound of the hooter.

Despite losing Sa’u and Mo Agoro to head injuries, the Cougars would continue to be on top despite conceding first in the second forty through Tom Halliday.

Any possible comeback though was quickly thwarted as Charlie Graham and Toby Everett scored in quick succession.

Robbie Storey forced his way over for the home side, but Graham would have his second shortly after on the back of a Dane Chisholm break.

The Dons would find their way over again through Misi Taulapapa before Matthew Bailey was sin-binned for a professional foul.

However, Keighley would have the final say as Aaron Levy dove over with seconds left on the clock.

North Wales Crusaders kept up the pace in the race for second, holding off a late fightback to pick up a 28-24 win against the Rochdale Hornets.

In an end-to-end first half, a penalty conversion would be the difference between the sides at the break.

Alex Eckley opened the scoring for the Crusaders, but Rochdale responded through Ben Killan.

A second Eckley try was again cancelled out through Jo Taira, but a Johnson kick gave North Wales a slender lead at the interval.

It appeared the contest was over after another Johnson penalty conversion was followed by two tries from Matt Reid and Rob Massam.

But a sinbin for Callum Hazzard sparked a Hornets comeback that saw them nearly snatch victory from the jaws of defeat.

Three tries in the last 8 minutes from Cobi Green, Jy Hitchcox, and Cian Tyrer followed, but none of the conversions would be successful meaning the Crusaders clung onto the two points.

Head Coach Rhys Lovegrove has made four enforced changes to his squad for last week’s victory against Doncaster last week.

Mo Agoro and Junior Sa’u (Both Concussion) are ruled out through HIA protocols with Dane Chisholm and Kyle Kesik both sidelined through suspension.

Keenan Dyer-Dixon, recalled from his loan at West Wales earlier this week, comes straight into the squad.

He is joined by Dalton Desmond-Walker (Calf) and Anesu Mudoti (Knee) who both return from injury and Aidan Scully.

Replacing them in the squad are loan duo Ramon Silva, a prop from Wigan, and Alex Smith, a half from Dewsbury.

There is also another return to Cougar Park this season for Benn Hardcastle after his previous visit in May with the Midlands Hurricanes.

KEIGHLEY COUGARS HEAD COACH RHYS LOVEGROVE: “The Crusaders pose a considerable threat as shown by the fact they currently second in the league and are coming to us on the back of 7 consecutive victories.

“I have a number of senior players and first team regulars side-lined through injury and suspension and I am interested to see how we adapt to this challenge and how we overcome the challenge with our execution.

“We can’t take our foot of the pedal and despite having our backs to the wall in certain aspects, we will stick to our systems and processes that have served us well throughout the year and look to add to the occasion.”

His last appointment to a Keighley match came earlier this month when he oversaw our 24-22 victory away at the Swinton Lions.

The Keighley Cougars opened up a two-point gap at the top of the League 1 table after a comprehensive 56-12 victory away at promotion rivals North Wales Crusaders.

The Cougars began brightly, scoring three tries inside the game’s opening quarter of an hour through Jake Webster, Aaron Levy, and Charlie Graham.

North Wales got onto the scoreboard through Rob Massam, but any momentum was halted by a length of the field intercept try from Alix Stephenson.

Rhys Lovegrove’s side turned the screw just before half-time with Mo Agoro diving over in the corner before Webster forced his way in for a second.

The game was then put beyond doubt in the first ten minutes of the second half, Dane Chisholm scoring a brace of tries with two great individual efforts either side of a second try of the evening for Levy.

Matt Reid would cross for North Wales, but a sinbin for Brad Billsborough allowed Keighley to turn that screw once again.

Lewis Young would be the fastest onto a Chisholm kick over the top to touch down with Levy then completing a hat-trick after he supported Stephenson after another break down the wing.

Massam would score a consolation effort for the hosts in the game’s closing stages, but the result was already beyond doubt.

Advanced tickets for the visit of North Wales Crusaders to Cougar Park this Sunday are on sale NOW.