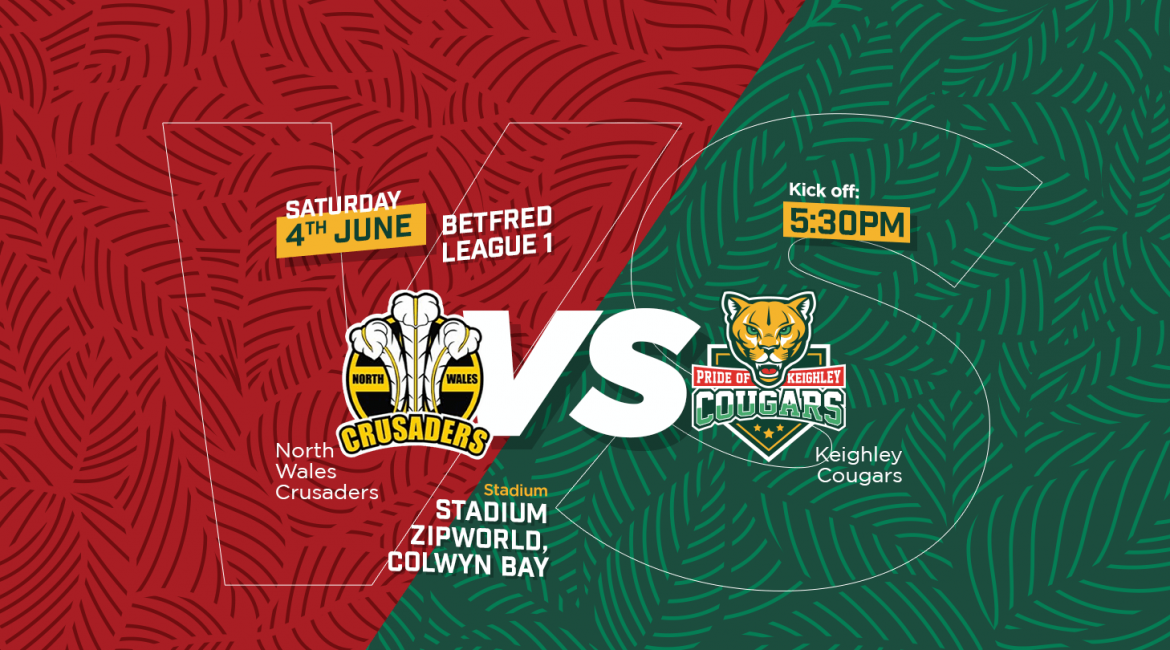 Keighley Cougars moved to the top of the League 1 table as they grinded out a 29-18 home victory against the Midlands Hurricanes.

It appeared as if Keighley were going to ease their way to victory as they raced into a fourteen-point lead.

Charlie Graham opened the scoring with Jack Miller then converting a penalty after Benn Hardcastle was sin-binned for a professional foul.

Nathan Roebuck extended that advantage further, but Jack Dawson got his side on the scoreboard before the interval.

A second Roebuck try shortly after Hayden Freeman was sin-binned for the visitors looked to have ended the game as a contest.

But Brad Clavering powered his way over and put nerves on edge around Cougar Park.

Dane Chisholm would slot over a drop goal, but from the restart Midlands would win the ball back and get within one point of their hosts courtesy of Matt Welham.

The Hurricanes comeback though was halted in its tracks as Mo Agoro scored twice in the last five minutes to see his side over the line.

He first fought his way over in the corner before racing 70 metres after Chisholm forced a handling error from Matt Welham.

The North Wales Crusaders maintained their unbeaten start to the league campaign as they saw off Oldham 30-16 at home.

After an even opening to proceedings, a moment of genius from Gav Rodden would open the scoring and the Crusaders dominated from there on.

Rob Massam and a further try from Rodden would give North Wales a comfortable lead at the break, however, both would depart the field injured.

Jordy Gibson and Alex Eckley though made sure their losses would not impact the game, and North Wales led 30-0 with 56 minutes on the clock.

The game though ended with a punch-up with the match official showing both Gibson and Dave Hewitt red cards for their parts in the coming together.

Head Coach Rhys Lovegrove has made two enforced changes to his 21-man squad from the victory a fortnight ago.

Jake Webster (Groin) and Scott Murrell (Foot) both return to the side after missing the Hurricanes game injured.

They take the place of Dalton Desmond-Walker (Hand) who is ruled out through injury, and Taylor Prell.

Dan Parker is deemed fit enough to keep his place in the squad after coming off the field injury in the Midlands game.

North Wales Crusaders Head Coach Anthony Murray names an unchanged squad from the one that defeated Oldham in their last outing.

The pair of Rob Massam and Gav Rodden, who both came off the field injured in that win, are both fit to play against the Cougars come Saturday evening.

Jordy Gibson is available for the Crusaders after avoiding suspension following his dismissal in the victory against the Roughyeds three weeks ago.

Dewsbury loanee Aaron Hall has had his loan move to Colwyn Bay from the Championship strugglers extended.

“Anthony Murray is doing an unbelievable job over there.

“But what you see are two clubs who are fairly similar theosophically as when you go to Colwyn Bay it is really fun to play in front of and there’s lots of noise just like we get at Cougar Park.

“North Wales are really trying to make waves and move forward as a club and they play that way too, they are a team who are excited to play footy and want to move the ball around when they’re in possession.

“They have threats across the field with outstanding outside backs and a powerful set of forwards, so we’re going to have our hands full throughout the contest.”

NORTH WALES CRUSADERS HEAD COACH ANTHONY MURRAY: “It is going to be a really close contest as they’re always tough games against Keighley.

“Keighley are a well drilled team with several players who can be match winners.

“We are focusing on being competitive and giving our fans something to cheer about.

“We’re going to take the game though as it comes as we just want to give a good account of ourselves.

“We will challenge Keighley in all the right areas and hopefully come out on the right side of the result.”

This Saturday’s game will be officiated by Michael Mannifield of the Huddersfield Rugby League referees society.

His last appointment to a Keighley match came just last month, when he oversaw the Cougars record breaking 96-0 victory over the London Skolars at Cougar Park.

Michael will be assisted by touch judges Ryan Cox (Liverpool) and Paul Marklove (Warrington). The reserve referee will be Daniel Sampson (Wales).

The Keighley Cougars earned their place in the play-off semi-finals with a 14-28 victory away at the North Wales Crusaders in the qualifying play-off.

After a physical start to the encounter, the Cougars would race into a 14-0 lead.

Jake Webster opened the scoring as he burrowed his way over from close range on the back of a dummy half play.

The visitors would extend their lead as a grubber in goal from Scott Murrell was grounded by the onrushing Jack Miller.

The boot of Miller would extend that lead further after the Crusaders were penalised for offside near to the line.

But North Wales found a way back into the game shortly before the interval as Brad Billsborough touched down his own kick after it deflected back of a post protector.

The Crusaders would then level the scoreboard through a Tommy Johnson penalty and Patrick Ah Van try following the sin binning of Jack Arnold early in the second half.

However, the Cougars would regroup and push onto victory with the kickstart coming through a penalty conversion from Miller.

With tension in the air, they were eased by Brenden Santi as the forward scored two late tries after powering over before being the beneficiary of a superb inside ball from Webster.

Advanced tickets for Saturday’s game across the border are on sale NOW.