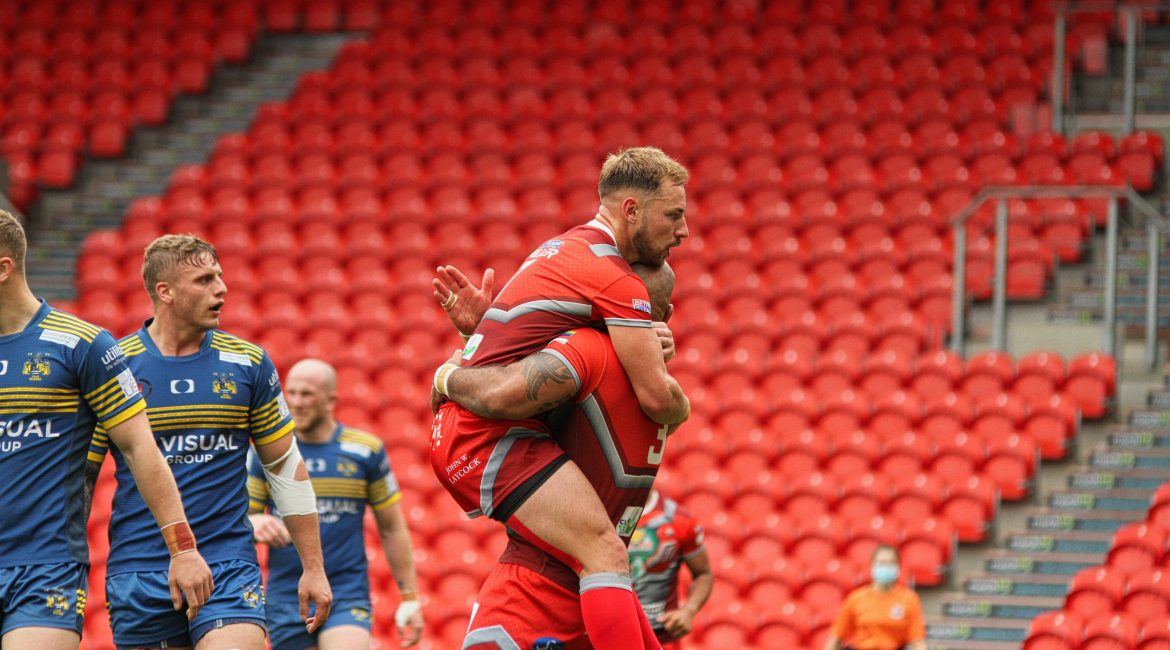 A dramatic final ten minutes saw the Keighley Cougars snatch a 28-26 victory from the jaws of defeat away at Doncaster.

The Dons came firing out of the blocks and went 12-0 inside the game’s opening six minutes through tries from first Ollie Greensmith, and then Tom Halliday on the opposite wing.

However, a 17th minute red card for Ben Cockayne reduced the home side to twelve men and allowed Keighley back into the contest.

And they found that way in through Jake Webster, the veteran reacting quickest to a Kyle Kesik grubber.

But Doncaster extended their lead to eight points from the boot of Jake Sweeting after the Cougars were penalised.

The gap at the interval though would be just two points as Con Mika marauded his way over with an unstoppable run from 10 metres.

It appeared though that despite the man disadvantage that Doncaster would find the win.

Two errors in defence from the Cougars led to two tries as Jake Sweeting took advantage of a knock-on and an interception to score.

Then came the grandstand finish by the visitors, started by Webster as he went through a gap in the defensive line to touch down.

The gap was then once again closed to two points from the restart as Taylor Prell broke through two attempted tackles to race over beneath the crossbar.

And with four minutes left on the clock, the sealed victory as Phoenix Laulu-Togaga’e dived over in the corner.

The North Wales Crusaders finished their regular season in style, cruising to a 44-0 home victory over the London Skolars in Colwyn Bay.

In truth, the Crusaders had full control of the contest from minute one to minute eighty as they secured a third-place finish.

Rob Massam opened the scoring with a brace of tries to take his season tally to twenty.

And then shortly before half-time, they extended their lead for the break to eighteen points as Gav Rodden crashed over from close range.

The beginning of the second half began with history as Tommy Johnson worked his way over the line to touch down and in the process to surpass 1,500 points in Crusaders colours.

Johnson would prove instrumental throughout the remainder of the game, and his cut-out pass would send Massam in at the corner to complete his hat-trick.

And the full-back would then begin the move to create an overlap that sent Dave Eccleston in for the next score.

The veteran Patrick Ah Van got in on the act as he cut down the wing and handed off a number of would-be tacklers to score.

And with the sound of the final hooter, Massam grabbed a fourth as he was quickest to race onto a grubber in goal from Jordan Gibson.

Head Coach Rhys Lovegrove has been forced into three changes from the side that defeated Doncaster last time out.

Phoenix Laulu-Togaga’e (Knee) is ruled out for the season following an injury sustained in the closing stages of last week’s game.

Jack Coventry (Knee) is also ruled out through injury whilst Aaron Levy is sidelined through the suspension he incurred for being charged with Grade B Dangerous Contact.

This means that both Jack Arnold and Josh Slingsby are recalled into the squad whilst Kieran Moran is named for the first time since Cougar Pride last month.

Billy Gaylor is expected to play following the illness that forced him to withdraw in the warm-up ahead of last Sunday’s game.

KEIGHLEY COUGARS HEAD COACH RHYS LOVEGROVE: “North Wales are the best team in the division for me, just because of their consistency.

“Going away and trying to win there will be tough, but even if we do that, we have to win at Workington, another hard place to go, to get that Grand Final at home.

“I don’t think that North Wales win a fortnight ago will have any bearing on the play-offs, as it’s a different ground and a different competition.

“That’s why you have a League Leaders’ Shield and a Grand Final.

“Being away is a different animal too, so it’s a game we have to look at in isolation.

“But we’ll build upon the things we’ve had in place for the last few weeks and keep fighting to progress in the play-offs.”

NORTH WALES CRUSADERS HEAD COACH ANTHONY MURRAY: “It’s just another game, but it’s like cup rugby league and we need to make sure we give a good account of ourselves.

“Finishing third in the table gives us a really good opportunity and we’re all looking forward to it.

“Keighley had a really tough fixture at Doncaster last weekend, managing to win, and they obviously beat us the weekend before.

“They’ve gone five on the trot and we’ve won eight out of nine, so it’s probably tipped as the tie of the weekend.

“It’ll be a really good experience for all the lads, and we’ll hopefully have a strong crowd in Colwyn Bay to cheer us on.

“Playing under the lights will be a new experience as we haven’t done it in a while, but I’m sure it’ll interest a lot of people once they’ve watched other sports matches earlier in the day.”

It is a second meeting in three weeks between these two sides.

A fortnight ago at Cougar Park, the Cougars staged a sensational second-half comeback to defeat the Crusaders 34-14, ending the Colwyn Bay outfit’s seven game winning streak in the process.

The first half was a fiercely contested forty minutes of Rugby League that saw momentum swing back and forth between the sides.

However, the Crusaders would move into an 8-0 lead with a Gav Rodden try being quickly followed by a Tommy Johnson penalty conversion.

But the Cougars would only trail by two at the interval with Scott Murrell racing onto his own chip over the top to touch down.

It appeared early in the second half that the Crusaders would extend their winning run as Brad Brennan crashed over from close range.

Keighley though would respond with a breath taking final 25 minutes that saw them run in 28 unanswered points to storm to victory.

Jake Webster would first power over to get his team back into the arm wrestle with Taylor Prell putting the Cougars into the lead, reacting quickest to a Johnson error from an early kick in the tackle count by Jack Miller.

QLT would be next to score with Alix Stephenson then blowing the roof of Cougar Park as he rounded three defenders to dive over on the back of a break from Prell.

Dan Parker then put the icing on the cake as he dived over seconds before the sound of the final hooter.

Tickets for Saturday’s game at the Stadiwm ZipWorld in Colwyn Bay are on sale NOW ahead of the trip across the border.

With a big crowd expected on the night, supporters are advised to purchase their tickets early and in advance of travelling to Wales on Saturday.

Seats are also still available on the supporters bus, priced at £10 each, with payment to be made either Friday at Cougar Park between 11am and 3pm, or upon arrival at the ground on Saturday prior to boarding the coach.

To purchase your tickets in advance of arriving on Saturday, please click HERE