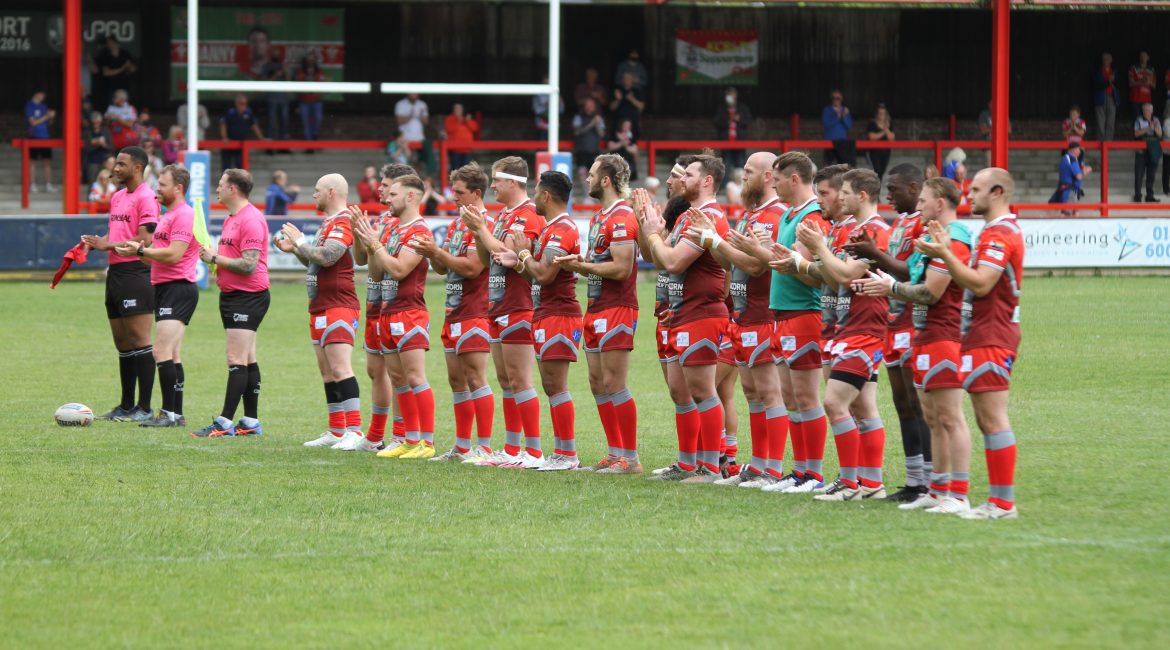 Keighley Cougars ended Barrow’s undefeated start to the 2021 season as they picked apart the League One leaders to record a 40-12 victory.

After a physical opening to the game, the scores were level at 2-2 courtesy of the boots of both Jack Miller and Jamie Dallimore.

An Aaron Levy try moved the Cougars in front, but further penalties from both Dallimore and Miller kept the scores within six points.

However, despite a third penalty conversion from Dallimore, a try from Mo Agoro just before half-time gave Keighley breathing space.

The second half would see the home side blow their visitors away as they began the half by running in 24 unanswered points.

Despite losing Ryan Wright to the sinbin, the onslaught continued and further tries followed from Charlie Graham, who went the length of the field following an intercept, and Brenden Santi.

Barrow would score a consolation through Jarrad Stack late in the game before Dallimore was placed on report for biting.

Friday will be the first time the Coventry Bears have been in action since their breath-taking 46-44 comeback victory against Hunslet a fortnight ago.

Hunslet were the better side in the first half as they took a 28-10 lead into the half-time interval.

Elliot Wallis scored the first try of the afternoon for the Bears, but Hunslet turned the lead around with two quickfire tries from Vila Halafihi and Matty Chrimes.

Jack Dawson got Coventry back within two points but three tries late in the first half gave the visitors a comfortable lead with an Alex Brown double being followed by an effort from Brad Hey.

Hunslet continued to turn the screw at the start of the second half with Lewis Young and a second try from Chrimes either side of a try from Liam Welham would give them a firm grip on the game.

Chris Cullimore would then cross for the Bears but a hat-trick score from Chrimes sent the Leeds outfit into the closing stages with a 44-22 lead.

But Coventry would stage a sensational comeback with four tries in the final ten minutes to snatch victory from the jaws of defeat.

Dawson would cross twice to complete his hat-trick with Dave Scott following up to set up a grandstand finish.

And then with a minute left on the clock, Kieran Sherratt would dramatically cross the line to seal a memorable victory for the Bears that cost Gary Thornton his job as Hunslet coach.

Head Coach Rhys Lovegrove has been forced into three changes from his squad from last weekend.

Taylor Prell and Spencer Darley are both unavailable due to work commitments whilst Alfie Seeley departed the club on compassionate grounds earlier in the week.

Coming into the side in their place are new recruit Con Mika, whilst Ben Stead is recalled, and Josh Lynam returns following a spell out through illness.

Robert Matamosi is away with the British Army at the Armed Forces Championship whilst a handful of players remain in the treatment room continuing their rehabilitation following injury.

Delaine Bedward and Bradley Sheridan are all recalled to the squad whilst new signing Danny Brough, not the Bradford Bulls namesake, is included for the first time after switching codes from Rugby Union.

Missing out from the sensational comeback win against Hunslet are Kieran Sherratt, Harry Kaufman, and Elliot Townsend.

There is also a strong former Cougars contingent in the side in the shape of Matt Welham, Chris Cullimore, and Liam Welham.

KEIGHLEY COUGARS HEAD COACH RHYS LOVEGROVE: “Coventry epitomise everything that League One is about.

“Just the way they’ve progressed and developed rugby outside of the heartlands.

“What Barrow have done is expected, but Coventry have been the team of the year for me.”

This is the second time in 2021 that these two sides have met, with the Cougars defeating the Bears at Cougar Park back in April in a pre-season friendly.

The Cougars set their stall out early on the afternoon, in truth wrapping up victory with five tries in the game’s opening 19 minutes.

Ben Stead, Brenden Santi, Jack Miller, and a brace from Mo Agoro in the opening quarter of the contest put Rhys Lovegrove’s side into an unassailable lead.

Keighley would find time before the half-time break to score another two tries with Alfie Seeley and Jake Webster finding the line.

Coventry would improve massively in the second half but conceded the first score after the interval as Miller crossed for his second try.

Both Jack Arnold and Bradley Ho would then find themselves disciplined by the referee following an exchange of incidents between the pair.

Reece Rance got the Bears onto the scoreboard as he rounded Josh Slingsby, but Slingsby quickly made amends as he scored a brace in the corner late in the game.

Tickets are still on sale for Friday’s game as the Cougars head to the midlands for this Betfred League One fixture.

You must purchase a ticket in advance of attending the Butts Park Arena on Friday evening to gain entry into the ground.

There will be a pop up outside bar to allow supporters to purchase refreshments once inside the venue.