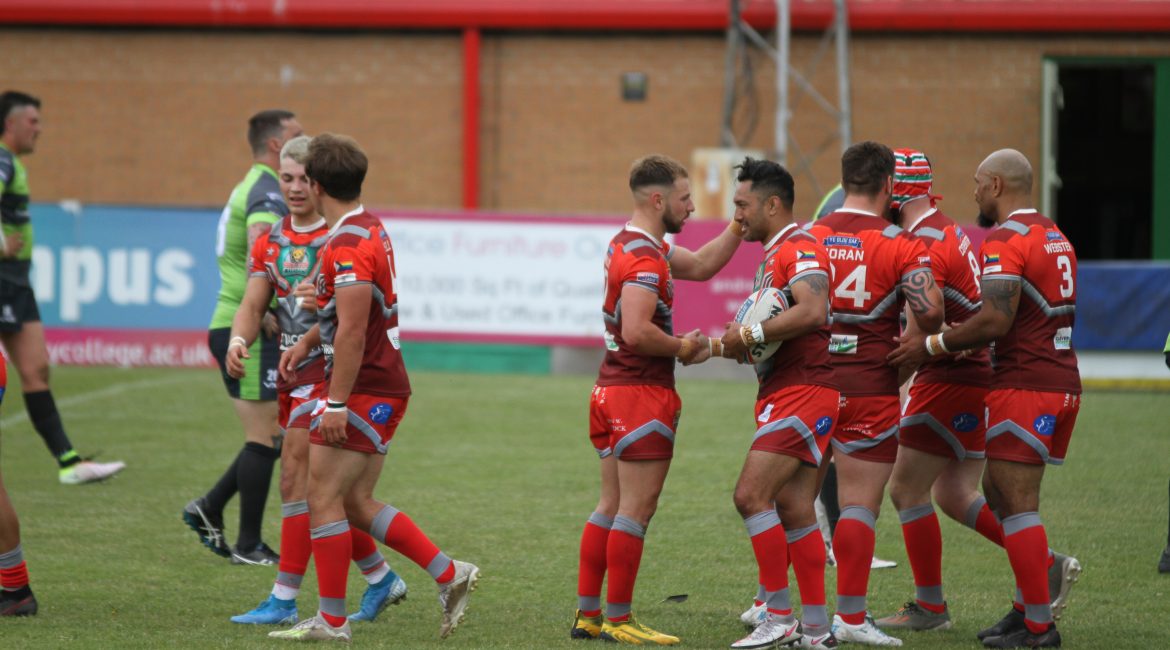 The Keighley Cougars returned to winning ways with a 70-12 home victory over bottom of the table West Wales Raiders.

Despite Covid disruption leading up to the game, the Cougars would run in 13 tries as they routed the foot of the table side from Llanelli.

The Cougars took a 34-0 within the first half hour with Jake Webster, Dan Parker, Taylor Prell, Jack Miller, Josh Slingsby and QLT.

West Wales did show some resilience and would cross for the next two scores with Jamie Murphy and Sam Herron both finding the line.

However, despite the visitors 12 points it would be all Keighley for the final half hour.

Prell scored his second before Parker would seal his hat-trick shortly after with two quickfire tries.

Ewan Badham was then sent off for the visitors, Moran sin-binned for the Cougars, but Aaron Levy crossed from the resulting penalty.

QLT then sealed his brace with Spencer Darley rounding off the scoring and the victory in the final minute of the game.

Coventry Bears went down to a battling 12-30 home defeat against Workington Town at the Butts Park Arena.

In truth, the Bears can be proud of their efforts on the afternoon, but Workington managed to make sure the win was in the bag for their trip home to Cumbria.

Hanley Dawson opened the scoring for the visitors, but the Bears would soon level the scores through Kieran Sherratt.

Ethan Bickerdike would quickly restore the Town lead, with that score giving Workington a six-point advantage at the interval.

As the game continued in the soaring heat, the visitors would pull away through a brace from Brad Holroyd that sent them into the final quarter with a 24-6 lead.

Workington’s all time record points scorer Carl Forber would find the line to put the result beyond doubt, but Coventry would be rewarded late on for their never say die attitude.

Bradley Ho, on a season long loan from the Bradford Bulls, powered his way over to make sure the home side had the final say on the day.

Head Coach Rhys Lovegrove has been forced into numerous changes to his originally named 21-man squad from last week’s victory over the West Wales Raiders.

With six players stood down by the Rugby Football League under the governing bodies Covid-19 protocols, club legend James Feather has been registered as a player and brought into the side should he be needed to be called upon.

Jack Arnold, Jason Muranka, and Morgan Robinson have also been brought into the squad with Ben Stead (Hip) named for the trip to his former club after recovering from injury.

Jake Webster has been rested as a precautionary measure with Bobby Darbyshire (Concussion) ruled out through injury.

The trip to the midlands comes too soon for another former Coventry player in Billy Gaylor (Arm).

Elliott Townsend, Brad Sheridan, and Kadeem Williams are the three players who miss out from last weekend.

Coming into the side in their place is Nathan Hill, the Bears top try scorer returning from injury.

Brad Clavering, who returns to the Butts Park Arena following a spell with the Dewsbury Rams, is also brought in along with Ryan Langton.

KEIGHLEY COUGARS HEAD COACH RHYS LOVEGROVE: “We pretty much had our best side out against Doncaster, but then we’ve had little niggles ahead of or in games.

“We’ve worked hard in these first six games and tried to go in all singing and dancing to get wins.

“We’ve not been up to standard in some, but we’ve not had the personnel either and you need both, which is maybe why we’ve only won three games so far.

“We need consistency, so as long as everyone who is still available for selection is fit for the weekend, it’s going to be difficult to rotate.”

This is the second time in 2021 that these two sides have met, with the Cougars defeating the Bears at Cougar Park back in April in a pre-season friendly.

The Cougars set their stall out early on the afternoon, in truth wrapping up victory with five tries in the game’s opening 19 minutes.

Ben Stead, Brenden Santi, Jack Miller, and a brace from Mo Agoro in the opening quarter of the contest put Rhys Lovegrove’s side into an unassailable lead.

Keighley would find time before the half-time break to score another two tries with Alfie Seeley and Jake Webster finding the line.

Coventry would improve massively in the second half but conceded the first score after the interval as Miller crossed for his second try.

Both Jack Arnold and Bradley Ho would then find themselves disciplined by the referee following an exchange of incidents between the pair.

Reece Rance got the Bears onto the scoreboard as he rounded Josh Slingsby, but Slingsby quickly made amends as he scored a brace in the corner late in the game.

Tickets are still on sale for Sunday’s game as the Cougars head to the midlands for this Betfred League One fixture.

You must purchase a ticket in advance of attending the Butts Park Arena on Sunday afternoon to gain entry into the ground.

There will be a pop up outside bar to allow supporters to purchase refreshments once inside the venue.