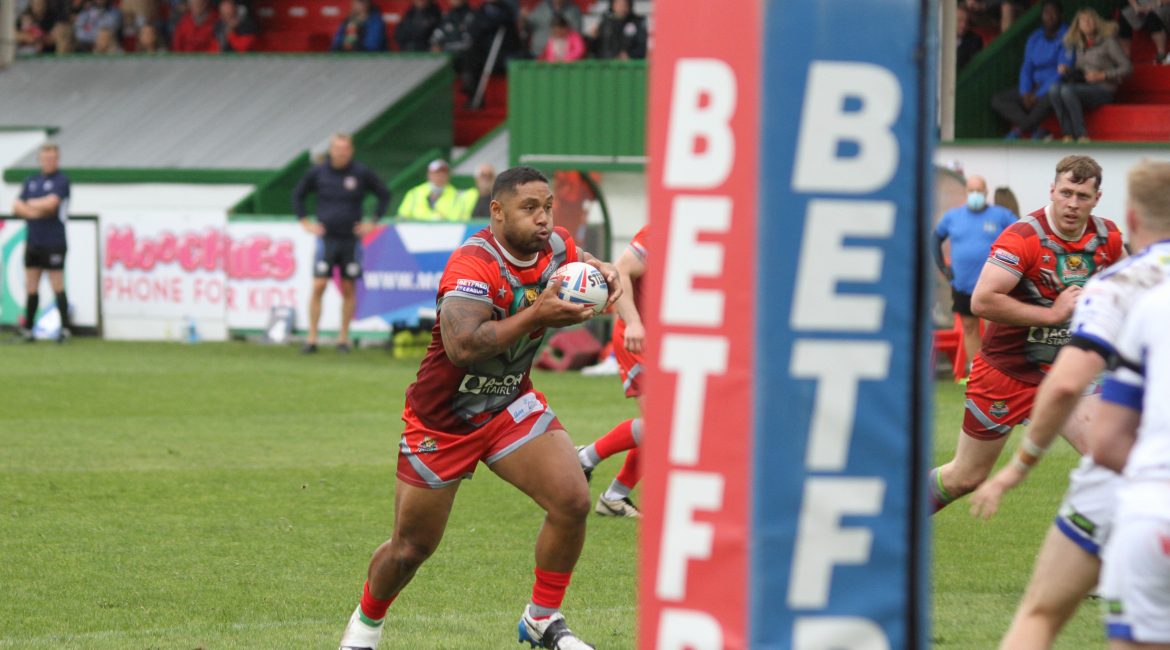 Keighley Cougars fell to a 18-22 home defeat at the hands of Workington Town at Cougar Park.

On a wet and miserable afternoon, the Cumbrian outfit cemented themselves in second position with a hard-fought win over their hosts.

The Cougars took an early 10-0 lead with tries in the game’s opening quarter through Mo Agoro and Josh Slingsby.

The first half would end with both sides exchanging possession with Workington scoring just before the interval as Joe Brown touched down Calvin Wellington’s flick back from a Jamie Doran kick.

Keighley then became their own worst enemies in the second half as penalties and errors allowed Town to turn the game on its head and take the lead.

Despite a Jack Miller penalty conversion moving Cougars a converted try in front, tries from Matty Henson and Jake Moore put the visitors into the lead for the first time on the afternoon.

Con Mika powered his way over to put Rhys Lovegrove’s side back in front but a try late on from Brad Holroyd made sure that Workington would return home victorious.

It was also a home loss for Coventry Bears, as they were defeated 32-16 by the North Wales Crusaders at the Butts Park Arena.

The game got off to a fast-paced start as Rob Massam scored in the game’s opening minute for the visitors before Hayden Freeman hit back instantly in the fifth minute to level up the scoreboard.

However, the Crusaders then took the game by the scruff of the neck and scored three unanswered tries to take a comfortable lead into the break.

Karl Ashall, Massam, and Jordan Gibson all found their way over the line to send North Wales into the break with a three converted try advantage.

The Bears though threatened a comeback as quickfire tries from Kieran Hudson and Harry Kaufman moved them back within six points of the Wrexham outfit.

But the comeback was thwarted as two tries late on saw the Crusaders over the line to victory.

Gav Rodden first created the breathing space before Tommy Johnson in the final minute of the game sealed the win.

Head Coach Rhys Lovegrove has made two changes from the squad that were defeated by Workington last weekend.

Quentin and Phoenix Laulu-Togaga’e, who returned to the club on loan from Hull Kingston Rovers this week, both return to the side for the first time since last month’s reverse fixture against the Bears after completing their RFL Covid-19 return to play protocols.

Jake Webster and Alix Stephenson both drop out of the squad whilst Cougar Pride comes too soon for Jack Coventry.

Coventry Bears Head Coach Richard Squires has made a number of changes to his squad following last week’s defeat to the North Wales Crusaders.

New signing Connor Terrill comes straight into the Bears squad after joining on loan earlier this week from the Barrow Raiders.

Matt Welham returns to the squad after missing out last weekend and is joined by another returnee in Delaine Bedward.

The return of Matt to the Bears squad means they visit Cougar Park with three former Cougars in their ranks.

Bradley Ho is out of the side after being recalled by his parent club Bradford Bulls with Jack Dawson and Kieran Hudson also missing out on the trip to West Yorkshire.

“Rugby league has always been at the forefront of breaking down barriers, and it was why I signed for Cougars, because of what we can achieve on and off the field.

“It’s part of our recruitment, engaging players by telling them our story as a club.

“The Pride game is always on our calendar, we’ve been doing lots of publicity for it, and the players are getting excited for what will be something different on Sunday.

“The key word about Pride is that it’s an event.

“For our game, you get the experience of rugby league, but also the chance to open yourself up.

“There may be people there who’ve not seen much of the Pride stuff before, or rugby league before, so it’s a chance to have conversations and ask questions.

“People can learn and develop, while watching the sport they love.

“This town is so passionate about its identity, with Cougars a big part of it, and I’m really happy to be involved.”

The reverse fixture between these two sides took place only four weeks ago as the Bears defeated the Cougars 24-18 on Friday Night Lights at the Butts Park Arena.

Coventry was good value for their win and raced into an early two try lead.

Poor goal-line defence by the Cougars allowed first Dan Coates, and then Liam Welham, to get through to touch down near to the posts.

Keighley worked their way back into the contest as Charlie Graham fought his way over on the back of a penalty, but two penalty conversions from Coates extended the hosts lead further.

However, on the stroke of half-time the Cougars again got back into the contest as Phoenix Laulu-Togaga’e scored his first professional try.

The visitors would start the second half brightly and moved within two points of their hosts as Phoenix Laulu-Togaga’e would score once again to seal his brace.

However, two quick fire tries in the space of three minutes from Delaine Bedward and Sam Bowring moved Coventry clear and on their way to a hard-fought victory in the Midlands.

Mo Agoro would find time for a consolation for Keighley, scoring in the corner as the final hooter sounded.

Tickets are still on sale for Sunday’s game as the Cougars welcome Coventry to Cougar Park for #CougarPride21.

You can still purchase a ticket in advance of attending Cougar Park on Sunday with a pay on the day option available once again upon arrival at the turnstiles.

Supporters will again be able to purchase hot food on the day at the ground with the Hall of Fame bar returning to a normal service for the first time this season which allows supporters to purchase alcohol to take onto the terraces.