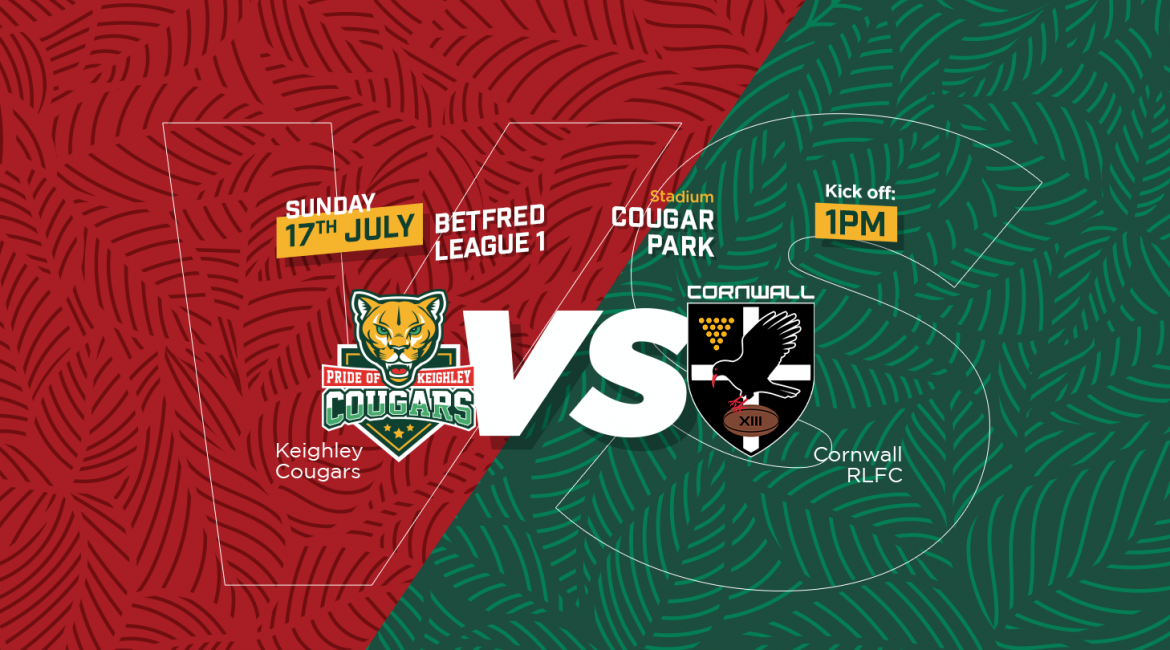 The Keighley Cougars extended their winning streak to 12 matches with an 86-0 win over the West Wales Raiders at Cougar Park.

Tries in the games early stages from Jack Miller and Nathan Roebuck set the Cougars on their way to another comprehensive victory.

Four further scores followed before the half-time interval as Mo Agoro, Dane Chisholm, Jake Webster, and Lewis Young, all would touch down.

The second half was even more of an onslaught as Keighley ran in 54 further unanswered points.

Charlie Graham then secured his own brace of tries, scoring two in two minutes, with Agoro completing his hat-trick as the rainbow warriors kept coming at the Raiders.

Aaron Levy was next to score two tries, his efforts coming either side of Agoro’s fourth of a productive afternoon.

The rout was completed by Roebuck, the centre walking the ball home to seal a pair of tries of his own.

The wait for a first home victory for Cornwall continues after they went down 10-44 at home to play-off chasing Doncaster.

Watson Boas opened the scoring after five minutes for the Dons before Cornwall were reduced to 12-men after Luke Collins was dismissed for something said towards the match official.

A Jack Ray try would nudge the Choughs in front but the man disadvantage in sweltering conditions would take its toll.

Aaron Ollett-Hobson restored the Dons lead before four tries in the space of 11 minutes killed the game off as a contest.

Ben Cockayne, Ben Johnston, Boas, and Jason Tali all touched down as the visitors began to run riot.

Adam Rusling’s 70-metre effort gave the home side some brief respite but a second try from Johnston and a Tom Halliday effort putting the icing on the cake for Doncaster.

Head Coach Rhys Lovegrove makes two changes to the side he named for the cancelled fixture against London Skolars.

Jake Webster returns after being unavailable for selection with Dalton Desmond-Walker (Hand) returning from an eight-week injury lay-off.

Nathan Roebuck (Bicep) is ruled out through injury whilst Anthony Dyne drops out the squad.

Dane Chisholm serves the final match of his suspension and Bradley Ho (Calf) is still on the treatment table.

Paul Bolger, Chris Chard, and Sam Snell, are all recalled to the Choughs side.

Jayden Myers comes into the side on dual-registration from the Bradford Bulls whilst new signing Jacob Beer is in line to make his debut.

Sam Arundel and Nathan Cullen are both made unavailable by their parent clubs with Liam Whitton and Josh Hartshorne both out through injury. Jack Ray is unavailable.

KEIGHLEY COUGARS HEAD COACH RHYS LOVEGROVE: “We are aware that this will be another tough test as we approach the run-in of this league season.

“In the reverse fixture last month, the 56-12 scoreline flattered us as Cornwall put in a real spirited performance and asked lots of questions of the boys.

“We expect more of the same on Sunday afternoon.

“Cornwall are getting better and better each week, and they’ll want that second win against us after being good value for their first win against West Wales and unlucky to not follow that up against Hunslet.

“I always like to see new people engaged in the sport and I hope more locals tap into it, as there’s a lot of rugby union teams down there.

“As we saw when we made the trip to Penryn last month, they as a club and team give you everything that footy should be about and that is also something we offer here at Cougar Park in terms of the overall gameday experience.

“They are still in their formative years, but I do believe that we’ll see it work in three- or four-years’ time and that Cornwall will be a competitive side at the right end of the division.”

This weekend’s referee is Kevin Moore of the Castleford and Featherstone Rugby League Referee Society.

Moore is a Grade 1 Referee with the Rugby Football League and has officiated the Cougars on a number of occasions over the past few seasons since being promoted to the professional game.

He has refereed the Cougars one on previous occasion this season, overseeing the dramatic 20-16 victory away at local rivals Hunslet RL on Good Friday on an evening where Mo Agoro would score on the sound of the final hooter to seal the win for Keighley.

He will be assisted by touch judges Jamie Collier (Rochdale) and Ollie Maddock (Warrington). The reserve referee for this fixture is Josh Pemberton (Warrington).

The Keighley Cougars maintained their unbeaten start to the league campaign with a 56-12 victory away from home against a spirited Cornwall outfit.

Dane Chisholm opened the scoring for the Cougars, but Cornwall kept their visitors at bay, bar an effort from Lewis Young, until Luke Collins was sin-binned for a late hit.

This allowed the floodgates to open for Rhys Lovegrove’s side as they ran in three more unanswered scores.

A brace from Charlie Graham, that saw him set a new club record for tries in consecutive matches, was complimented by a four pointer from Alix Stephenson.

Cornwall’s misery before the break was compounded by a red card for full-back Liam Whitton.

The home side though started the second half brightly and would score through Nathan Cullen.

However, the Cougars responded with five second half tries.

Chisholm would weave through for a second before Harvey Spence opened his account for the club on the back of a break from Young.

Mo Agoro then extended his tally to the season to 16, with two tries either side of Toby Everett crashing over for Keighley.

Cornwall though had the final say on the day, Aaron Jones-Bishop scoring after a kick was misjudged by the visiting defence.

Advanced tickets for the visit of Cornwall RLFC to Cougar Park this Sunday lunchtime are on sale NOW.