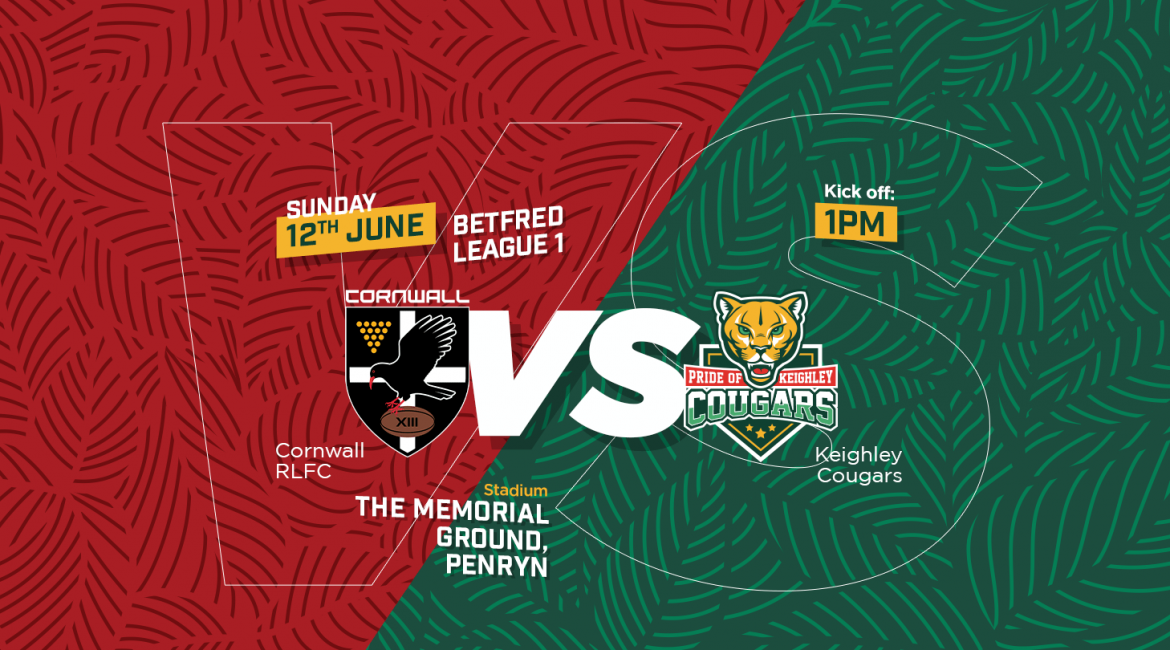 The Keighley Cougars opened up a two-point gap at the top of the League 1 table after a comprehensive 56-12 victory away at promotion rivals North Wales Crusaders.

The Cougars began brightly, scoring three tries inside the game’s opening quarter of an hour through Jake Webster, Aaron Levy, and Charlie Graham.

North Wales got onto the scoreboard through Rob Massam, but any momentum was halted by a length of the field intercept try from Alix Stephenson.

Rhys Lovegrove’s side turned the screw just before half-time with Mo Agoro diving over in the corner before Webster forced his way in for a second.

The game was then put beyond doubt in the first ten minutes of the second half, Dane Chisholm scoring a brace of tries with two great individual efforts either side of a second try of the evening for Levy.

Matt Reid would cross for North Wales, but a sinbin for Brad Billsborough allowed Keighley to turn that screw once again.

Lewis Young would be the fastest onto a Chisholm kick over the top to touch down with Levy then completing a hat-trick after he supported Stephenson after another break down the wing.

Massam would score a consolation effort for the hosts in the game’s closing stages, but the result was already beyond doubt.

It was so near, yet so far, for Cornwall RLFC as they missed out on a first ever victory by four points, going down 20-24 at home to the London Skolars.

Aaron Jones-Bishop opened the scoring on debut for Cornwall, touching down a Nathan Conroy grubber, but the Skolars would respond through Lameck Juma. The centre turning his way over beneath the sticks.

Judd Greenhalgh powered his way over to give London the lead, but things would then reach boiling point.

The two sets of players would come together, Mike Greenhalgh being sent to the bin for a clear punch on Josh Hartshorne.

Cornwall made the numbers advantage count after the break, Joe Purcell touching down a grubber from Adam Rusling.

Skolars ill-discipline would rear its head once more with Luciano Bejanidze being binned for dissent before Judd Greenhalgh was also sent for ten after a high shot on Rusling, the latter of which saw Cornwall take the two to nudge themselves in front.

Mike Greenhalgh went from villain to hero, powering his way over to put the visitors back in front, before Jarred Bassett would put the result beyond doubt for the men from the capital.

A late try from Purcell proved to be nothing more than a consolation as the Choughs fell to another loss.

Head Coach Rhys Lovegrove has named an unchanged squad from that which defeated the North Wales Crusaders last weekend.

Both new signings, Eddy Pettybourne and Junior Sa’u, are unavailable for the journey south this week.

Pettybourne’s international clearance came to late in the week to allow him to be eligible for this fixture, whilst Sa’u is not due to arrive back in the country until early next week.

Dalton Desmond-Walker (Hand) and Rory Nettleton (Ankle) are the Cougars only injury absentees.

Cornwall RLFC Head Coach Neil Kelly has made four changes from the side that was narrowly defeated by the London Skolars.

Nathan Cullen, who joined the club on loan from Hull Kingston Rovers this week, comes straight into the side.

He is joined by Will Adams and Coby Nichol, who are both on dual-registration agreements from the Bradford Bulls, with Aaron Thomson returning to the Choughs side following injury.

Adam Rusling is ruled out through injury whilst there are no places in the squad this week for James Collings, Kyle Johns, or Andy Kay.

KEIGHLEY COUGARS HEAD COACH RHYS LOVEGROVE: “Cornwall are getting better and better each week, and they’ll want that first win against us.

“I always like to see new people engaged in the sport and I hope more locals tap into it, as there’s a lot of rugby union teams down there.

“I’m not expecting so much from them this year or next, but I really think we’ll see it work in three- or four-years’ time.

“It’s a long journey on a bus this weekend, to then expect the team to perform as we want.

“We’ll have a couple of sessions to assess the situation then decide the direction we want to go.”

CORNWALL RLFC HEAD COACH NEIL KELLY: “Regardless of the opposition, whether they are at the top or the bottom of the table, it once again comes down to us giving that extra five or 10 per cent to improve and get wins.

“It can be any club in this division we are playing but when we produce that extra effort and rely on the rest of our performance, teams will struggle against us.

“You get a big reward for the icing on the cake and the solution to find a polished performance relies on those in our own changing room.”

This Sunday’s game will be officiated by John McMullen of the Wigan Rugby League Referee’s Society.

A veteran referee at this level of the sport, McMullen has been a Grade 1 official since the beginning of the 2015 season after spending many years officiating within the community game.

His efforts on the field were rewarded in 2016, as John was awarded the Super League Academy Referee of the Year accolade.

Away from the field, he works for the Rugby Football League on a full-time basis as the National Clubs Manager for Community Rugby League after holding similar roles within the sport since joining the governing body in 2009.

John has overseen several Keighley Cougars games over the years, with his last appointment for one of our fixtures coming in May of last year when we defeated Doncaster 44-18 at Cougar Park in Betfred League 1.

Michael will be assisted by touch judges Alex MacDonald (Gloucester) and Peter Wroe (Cornwall). The reserve referee will be Phil Johnson (Devon).

Sunday’s fixture will be the first ever meeting between the Cougars and Cornwall.

Advanced tickets for Sunday’s visit to the Duchy are on sale NOW.

You can purchase tickets in advance by clicking HERE, or you can pay on the turnstile upon arrival at the ground. Turnstiles are open from 11am.