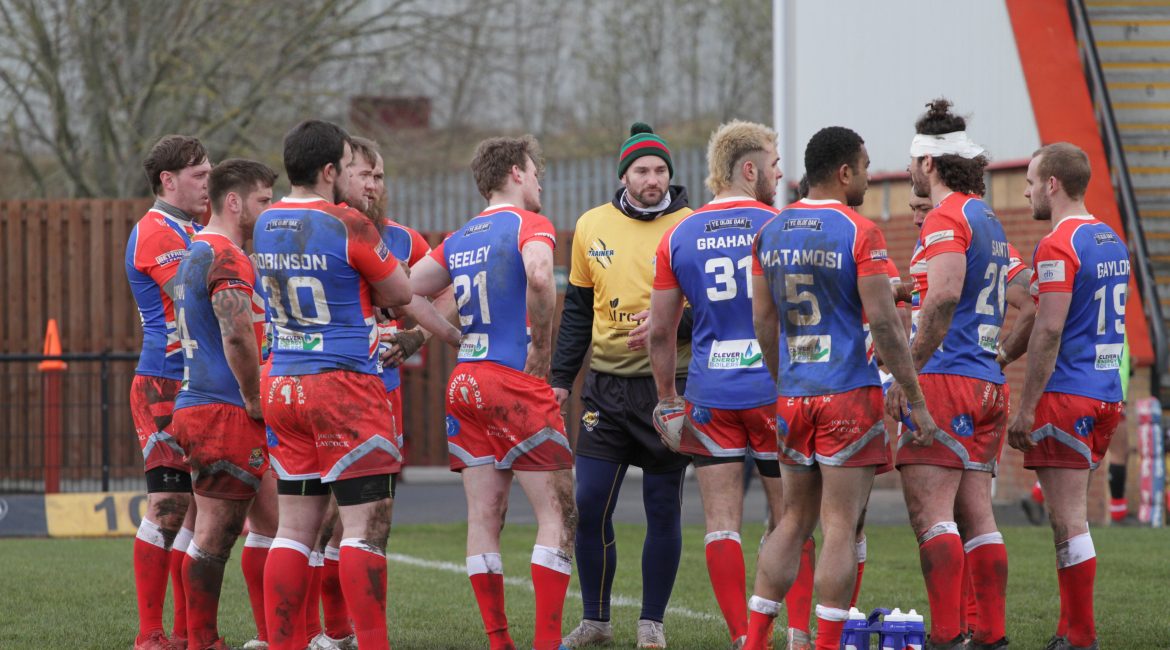 Returning to the field for the first time in 370 days, Keighley Cougars were the better side in defeat against the Bradford Bulls in the Joe Phillips Memorial Trophy.

An expected slow start after such a lengthy lay-off allowed the Bulls to take an early 12-0 lead through tries from Thomas Doyle and Danny Brough.

However, the Cougars would go into the half-time break level after a superb 60-metre interception try by Charlie Graham was followed up a Billy Gaylor score on the back of a superb kick chase from Jack Arnold.

Ross Oakes scored on the back of a penalty to restore the Bulls lead before Anthony Walker extended the hosts lead further, crashing over from close range from the restart after Alix Stephenson was stretchered from the field of play.

A second try from Graham gave the Cougars the final say on the afternoon, but the Bulls held out to retain the trophy.

Tomorrow’s game will see the London Broncos return to action for the first time in 377 days following the impact of Covid-19.

Danny Ward’s side will be looking to pick up where they left off on the 8th of March last year, an 18-12 victory away at the York City Knights.

The Broncos came out of the blocks firing that afternoon, racing into 18-0 lead inside the opening quarter of the game with Rhys Curran scoring a double either side of a four pointer from Guy Armitage.

York then finished the first-half strong, a quickfire double from Matty Marsh bringing them back within a converted try of London.

The second half saw the defences on top as neither side could find a way to keep the scoreboard ticking over as the visitors managed to hold out and return to the capital victorious.

Head Coach Rhys Lovegrove could potentially hand out a total of 6 competitive debuts after announcing his 21-man squad.

Father-son duo Quentin and Phoenix Laulu Togaga’e, last weekend’s Man of the Match Charlie Graham, Brenden Santi, Zach Braham, and Robert Matamosi are all in line to take to the field for the Cougars this weekend.

Josh Lynam (Quad) is fit to play after withdrawing late ahead of the Bulls game, but Scott Murrell (Calf) and Bobby Darbyshire (Wrist) are both ruled out through injury.

Jake Webster (Paternity Leave) has returned to training this week, but the trip to the capital comes to soon for the former New Zealand international.

In the home camp, Danny Ward is in line to hand 7 players their Broncos debuts against the Cougars this weekend.

The fifth potential new face to debut for the capital club is Paulos Latu, the Tongan outside back a late arrival on trial from Limoux in the French Elite competition ahead of the 2021 season.

Youngsters Gideon Boafo and Jacob Jones are also in line to debut after being handed first-team deals for this season.

And despite missing key players such as Jarrod Sammut, Matty Fozard, and Tuoyo Egodo, the Broncos still name a strong side that features the likes of Rhys Curran, Josh Walters, and Cory Aston.

There is also a strong influence of homegrown talents too, with some names familiar to Cougars supporters after featuring on dual registration for the London Skolars and Coventry Bears over the last number of years.

KEIGHLEY COUGARS HEAD COACH RHYS LOVEGROVE: “It’s a difficult draw for us because no-one in our league plays like the Broncos.

“That wouldn’t have been as much of a factor if we’d played another big, direct northern team.

“Rugby league players are ego-driven, and we want to compete, but we’re not going to learn much from the game.

“The pitch will probably be a factor, as will the fact that they’re a full-time team who are pushing for promotion to Super League.

“But the boys are relishing the idea of going to and competing hard against a club like that, which is good, because it shows we’ve recruited ambitious players to play here.”

LONDON BRONCOS HEAD COACH DANNY WARD: “Given our location, the difficulties outweighed the benefits of playing a pre-season game.

“We’d most likely have had to travel, it would have been a fair distance, and that would have meant getting on a coach with the associated protocols to factor in.

“We looked into it and decided the logistics were too much, so we’ve focused on tailoring our training to try and provide plenty of the kind of contact work we’d have got through playing a match.

“Keighley are one of the stronger League One side and have made some impressive signings such as Scott Murrell, so it will be a good test for us.”

Saturday’s Betfred Challenge Cup First Round tie between the Cougars and the Broncos will be the first meeting between the two in just short of 26 years.

The last meeting between the two sides came in May 1995 at Cougar Park, the Cougars thrashing their visitors 38-4 on the day to secure a place in the Premiership Final at Old Trafford the following weekend.

Despite the Keighley win on the day, and Premiership triumph in Manchester against Huddersfield, the two sides would meet again shortly after off the field as the formation of Super League saw London controversially admitted to the new look top division ahead of the Cougars.

The game is available to purchase at the price of £4.95 until midnight tonight, with the price then rising to £10 if purchased on the day.