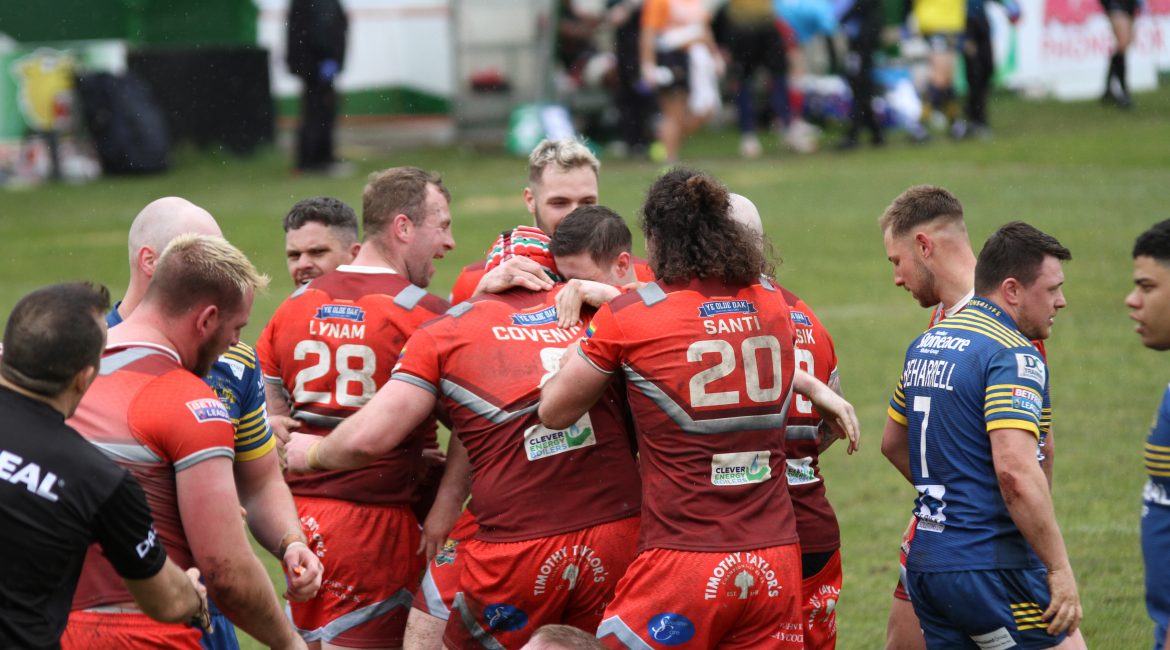 The Keighley Cougars began their League 1 season in style with a comprehensive 44-18 victory against Doncaster RL at Cougar Park.

After opening the scoring through an outstanding chip and chase that was touched down by QLT, the sinbinning of former Cougar Matty Beharrell seemed to light a fire under the Dons that saw them take the lead.

Two quick fire tries from Kieran Cross and Liam Johnson gave the visitors a temporary advantage but an interception from Charlie Graham and a close-range effort through Aaron Levy gave the Cougars a six-point lead at the break.

Beharrell levelled the scores immediately after half-time, but Rhys Lovegrove’s side would run in 26 unanswered points as they stormed to victory and the top of the Round One table.

The sinbinning of Ben Johnston and Jake Webster allowed the Cougars to score two quick tries in the aftermath through Alfie Seeley and Jack Coventry.

Brenden Santi then took advantage of a Johnston error to touch down with Jack Miller and Graham both scoring late on to put a gloss on the victory.

It appeared the Raiders were on course for a cricket score as they stormed into a 18-0 lead, averaging over a point a minute in the game’s early stages.

Nathan Mossop, Jake Carter, and Mark Tyson, all crossed within the first 14 minutes to put Paul Crarey’s side on the ascendancy.

However, the Bears came fighting back through two scores from Nathan Hill and Sam Bowring before a further Barrow try from Carl Forster was responded too with a second four pointer for Hill.

A second score of the afternoon from Carter was the perfect way to start the second half for the Raiders, but Coventry wouldn’t go down without a fight and got back within two scores once more as Matt Welham plucked the ball out of the air to touch down.

Hill was then sin-binned, and this allowed Barrow to get themselves over the line twice more with Shane Toal and Adam Walne putting the Cumbrian outfit out of sights of their battling opposition.

Head Coach Rhys Lovegrove has made two changes to the 21-man squad he named for last weekend’s victory over Doncaster.

Mo Agoro (Leg) is ruled out through the injury that forced him from the field during the first-half last Sunday and is replaced in the squad by Taylor Prell, who is once again available for selection.

The other change to the squad sees Billy Gaylor replaced Ben Stead with Jake Webster available for selection after disciplinary ruled his incident in the second half last week was sin-bin sufficient.

Paul Crarey has named both his new signings in his 21-man squad for the visit of the Cougars.

French international Hakim Miloudi and Sam Dowsett, who joined from Palau Broncos and Whitehaven respectively earlier in the week, are both in line to make their Barrow debuts on Sunday.

Charlie Emslie and Carl McBain are the two players who miss out as a result of their inclusion in the only two changes from the squad named ahead of last weekend’s victory in the Midlands.

Jamie Dallimore, who missed out against the Bears last week through a knee injury, is named in the squad once again in the hope he will be fit for this Sunday’s game.

For two sides who were inseparable whether it be the league, cup, or friendlies, during the past decade, this Sunday will be the clubs first meetings since pre-season ahead of the 2018 campaign.

In the driving wind and rain of a traditional January afternoon, the then newly promoted Raiders saw off the Cougars with relative ease as they recorded a 46-20 victory at Craven Park.

Barrow took an early advantage of the game through tries from Joe Bullock and Luke Cresswell, the Cougars responding through Harry Aaronson.

Lewis Fairhurst would then cross to bring Keighley within two points of their hosts, but Barrow got back on the front foot as Dan Toal crossed to give them an 8-point lead at half-time.

The Raiders would then begin the second half by scoring 22 unanswered points that saw them storm to a comprehensive victory in the pre-season opener.

Declan Hulme, Nathan Mossop, Tom Walker, and second scores of the afternoon for Cresswell and Toal, blew the Cougars out of the water.

The Cougars would have the final say of the afternoon however, scoring two late consolations through Cameron Leeming and Adam Ryder.

After an encouraging start in defeat last weekend against Stanningley from the Keighley Cougars Ladies team, whose mix of experience and youth shows plenty of potential in what will be tough challenging season in a wide-open Women’s Championship season, they hit the road once again against the Barrow Raiders.

The ladies travel to Cumbria to face the Barrow Raiders as a curtain raise to their male counterparts at the Matt Johnson Prestige Stadium this Sunday, with the Women’s game kicking-off at 12pm.

The club social media channels will bring both half-time and full-time updates from Craven Park, with the game itself being streamed LIVE by the RFL through their Twitch channel.

To watch the Ladies game on Sunday, please follow this link: https://www.twitch.tv/rugbyleaguetv

The game is available to purchase at the price of £4.95 until midnight tomorrow, with the price then rising to £10 if purchased on the day.