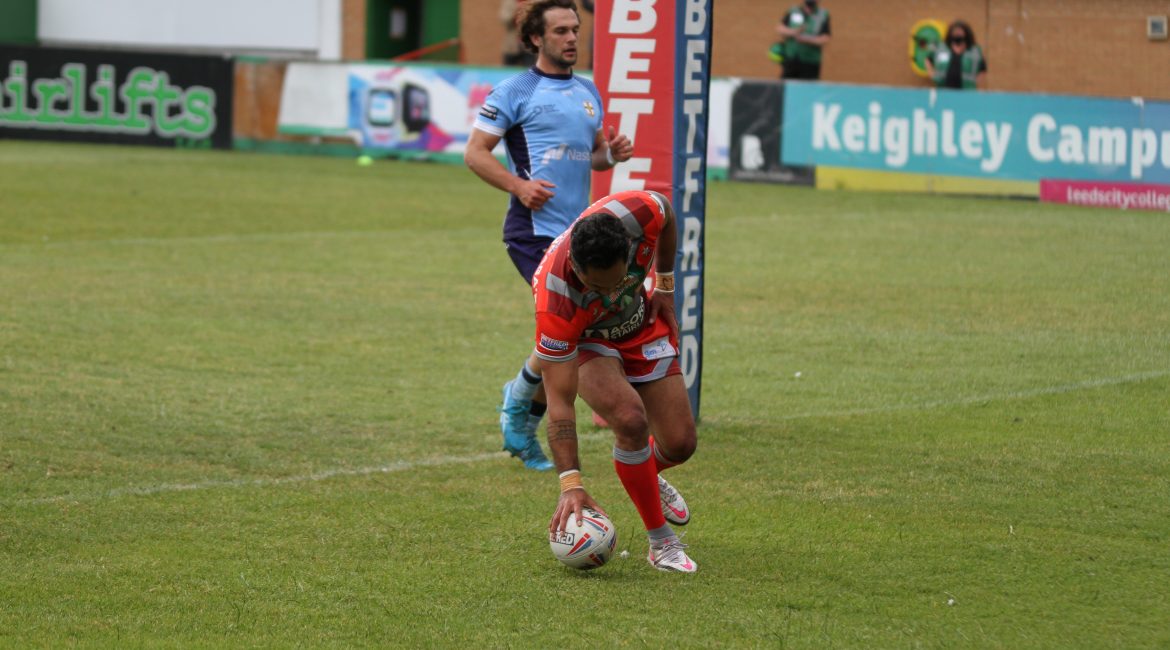 Keighley Cougars away day blues continued as they fell to a seventh consecutive loss on the road in a 34-28 defeat to the North Wales Crusaders.

It was a nightmare start for Rhys Lovegrove’s side as they fell behind 26-0 in the contests opening 21 minutes.

Brad Billsborough, Gav Rodden, Rob Massam, and a brace from Tommy Johnson, set the stage for what should have been a long and uncomfortable afternoon for the Cougars in Colwyn Bay,

However, Keighley would stage a sensational comeback either side of the break to take a 28-26 lead.

Charlie Graham and Aaron Levy would both score before the break to move the Cougars within 14 points.

And after the restart, a second from Levy and scores from Scott Murrell and Brenden Santi saw the Cougars in the lead against all odds.

With momentum swinging back and forth, a tiring Keighley outfit would give away two cheap penalties and Johnson would convert both to restore the lead.

Patrick Ah Van then sealed victory for the Welsh outfit, diving over in the corner with 90 seconds left on the clock.

Despite having to play 41 minutes with 12 men, the Barrow Raiders blew Doncaster away 31-6 at the Matt Johnston Prestige Stadium to continue their undefeated start to the season.

Tries from Jamie Dallimore and Jarrad Stack gave the Raiders a 12-0 lead heading into the half-time interval.

However, just before the hooter sounded, Dallimore would be sent off for a high tackle that would leave the home side down to 12 men.

Despite being down a man, Ryan Johnston would score a try and kick a drop goal to extend the Raiders lead further to 19-0.

Brad Foster would score a reply for the Dons, but Barrow would score two late tries to seal the victory.

A second from Johnston would be followed by a late score from Jordan Walne.

Head Coach Rhys Lovegrove makes two changes to his 21-man squad ahead of the visit of the Raiders to Cougar Park.

Robert Matamosi and Morgan Robinson are the two players who drop out of the side.

Jake Webster (Ankle) and Aidan Scully (Shoulder), Bobby Darbyshire (Concussion), Wellington Albert (Ankle), and Alix Stephenson (Leg) are now all in the rehabilitation stage of their post-injury recovery but are ruled out of this weekend’s game.

Barrow Raiders Head Coach Paul Crarey only makes one change to the squad he named for last weekend’s victory over Doncaster.

This change sees Mark Tyson come into the squad in place of Danny Morrow.

Jamie Dallimore, who was sent off against the Dons, is available for selection after receiving no charge earlier this week from disciplinary.

Hakim Miloudi, Ben Harrison, and Tee Ritson are all still unavailable through injury.

KEIGHLEY COUGARS HEAD COACH RHYS LOVEGROVE: “Barrow are top because they just do what they’re good at very well.

“In those moments where something needs to happen, they can pull it off.

“They have an experienced forward pack, continuity over a few years, and have managed to keep key people fit this season.

“They’ve ground out wins and probably been a bit lucky in that they’ve generally faced the strongest teams at home so far.

“But they do have a consistent style, which is easy for them to repeat, and they’re very hard to beat.

“But when we’re on it, we can beat anybody, which we’ve shown by easily scoring points against the top teams so far.”

BARROW RAIDERS HEAD COACH PAUL CRAREY: “I thought we were outstanding. I have seen some games and some moments on this ground before, but that second half was something else – how they worked for each other, managed the game, played through the middle.

“I think we put on 19 points or something ridiculous with 12 men.

“We spoke at half time that what we do best is play through the middle with our forwards and little, short passes and just stay on the process.

“We put Brad Crellin as a little pivot to just engage with his back rower to lay some lines for us and then we went back onto the middle, and we just religiously stuck to it.

“I am just so proud of the lads for what they are doing. That was just something special and the fans let us know it was special walking off.”

The last meeting between these two clubs took place in May of this year, as Barrow comfortably defeated the Cougars 40-18 at the Matt Johnston Prestige Stadium in Round 2 of the Betfred League One season.

The Raiders raced into a 24-0 lead through tries from Luke Cresswell, Jarrad Stack, Hakim Miloudi, and Adam Walne, with Jake Carter adding a further two points from the boot.

Jamie Dallimore was then sin-binned for a high shot on Alfie Seeley that allowed Rhys Lovegrove’s side to finally find a footing.

Keighley though would fight back and get themselves back into the contest at 24-18 with Brenden Santi, Jake Webster, and Scott Murrell, all finding the line either side of the half-time interval.

A further penalty from Carter would extend the Raiders lead and Paul Crarey’s men would then take the ascendancy in the contest and push onto the seal a comfortable victory come the full-time hooter.

A second try from Stack and a four pointer from Ben Harrison either side of a third Carter penalty conversion would make sure Barrow made it two wins from two at the start of the season.