Ones To Watch – West Wales Raiders 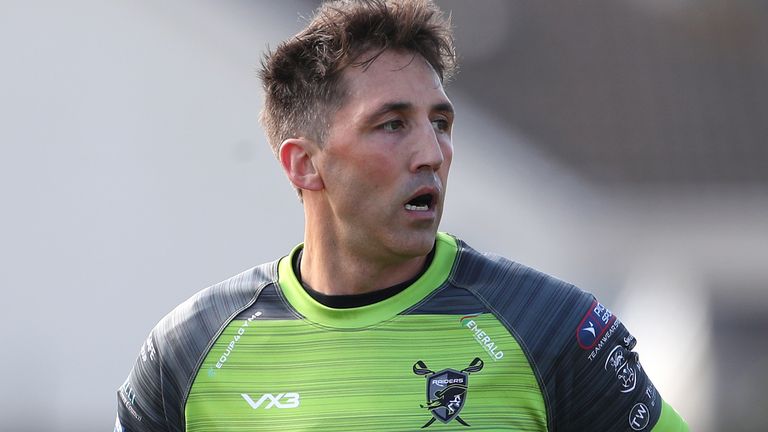 We move on to the next edition of the ‘Ones To Watch’ series with Saturday’s opponents at Stebonheath Park, the West Wales Raiders.

A man who has done it all at the top of professional Rugby Union, Gavin Henson came out of retirement to sign with the West Wales Raiders ahead of this season.

Always wanting to play the 13-a-side game, Henson seized the opportunity to join the Llanelli based outfit ahead of this season.

Making his debut in March’s Betfred Challenge Cup defeat against the Widnes Vikings, an injury sustained in the game would rule him out for the entirety of the season until the weekend.

Named in the 21-man squad for Saturday’s game, the long awaited second appearance for Gavin is expected to come against the Cougars.

Beginning his professional career with the Ospreys at the beginning of the millennium, he quickly established himself as a regular for both club and country in Rugby Union at a young age, making his Wales debut in 2001.

Making over 100 appearances, and scoring over 1000 points, for Ospreys during his decade in Swansea his performances would see Henson selected to represent the British & Irish Lions tour of New Zealand.

After some high profile incidents in his personal life away from the field, as well as injuries on the field, would see him opt to take a sabbatical from the sport in 2010 before returning after 15 months on the sidelines.

Returning to the public eye prior to his return by featuring on Strictly Come Dancing, several short spells at club level both at home and abroad would follow prior to his retirement from Rugby Union in 2019 as well as continuing to become a massive name away from the pitch through a number of television appearances.

After retiring and buying a pub following his departure from the Dragons in 2019, he was tempted to return to the field by the Raiders ahead of this season and will be looking to make up for lost time through injury in the final three weeks of the 2021 campaign.

Utility back Jamie Murphy is back in Rugby League for a second spell with the West Wales Raiders, joining ahead of this season following a stint back in Rugby Union.

A dual-code international with Wales in Rugby League and Germany in Rugby Union, Murphy offers cover in any position across the backline as shown this season by featuring on both the wing and in the halves in his two appearances to date.

Born and raised in Bridgend, Jamie has vast experience across both codes and scored his first try of the season on Sunday against Barrow.

In Rugby League, the back first signed with the South Wales Scorpions before being picked by Crusaders midway through the 2010 campaign as they played their final two seasons in Super League prior to folding and reforming as North Wales.

Following the Wrexham club’s financial woes, Murphy would return to the Scorpions and become a mainstay of the club for a number of years as they maintained competitive in the third tier before returning to Rugby Union with his hometown club.

From Bridgend he would join the Ospreys, and Murphy would make three senior appearances for the club in the Anglo-Welsh Cup before going on to have spells across the leagues back with Bridgend before also going on to join Newport and Aberavon.

He would return to Rugby League with the All Golds before a further spell with the Scorpions ahead of making another transition back to Union, signing with Bridgend once more as well as attempting to help Germany reach the Rugby Union World Cup despite being a youth international with Wales in the other code.

Following the Covid pandemic bringing a temporary halt to lower-level Rugby Union both sides of the border, Jamie would once again return to Rugby League and sign with the West Wales Raiders ahead of the current season.

And despite being sent off on his debut against Widnes in the Challenge Cup, he returned from suspension with a try-scoring performance in last Sunday’s defeat to Barrow.

Veteran Welsh international Ashley Bateman is now into the third season of his third spell with the club.

A product of the Crusaders during their time in Super League, the versatile Bateman can play in a number of positions which prove him to be a vital utility to Head Coach Aaron Wood and his side.

Returning to Rugby League in 2017, Bateman would re-join the now South Wales Ironmen for a brief spell before joining the Coventry Bears midway through that season, where he would remain until the end of the 2018 season.

To date, Bateman has made just short of 130 appearances for the Raiders across his three spells with the club with his reputation as a club legend secured.

Wales international Rowland Kaye returned to the ‘Stebo’ midway through the 2021 season after a spell away from the club.

Departing the Raiders following the cancellation of the 2020 campaign, the utility would head across the channel and play a season with Carcassone in the French Elite Championship over the winter months.

A product of the Llanelli based outfit’s youth teams prior to their rise to the professional ranks, Kaye has represented Wales internationally at every level since Under 16.

Following the decision by West Wales to enter League One, he would be a part of the historic first ever squad that faced the Bradford Bulls at Odsal Stadium in the Third Round of that season’s Challenge Cup.

Becoming a regular in the side, he quickly established himself as one of the division’s most promising young talents despite the results that would follow the club.

Despite this, he remained an integral part of the Raiders squad and would feature in their historic first ever win against the Coventry Bears in the 2019 season.

Looking to push on both on and off the field, Covid-19 would halt Rowland and the club’s progress and he made the decision to move to France for the winter season.

Featuring regularly for Carcassone, the end of the French season in the spring saw him return home and re-join West Wales along with Steve Parry to help the club continue to develop as shown by their recent draw with Doncaster.