Ones To Watch – Rochdale Hornets 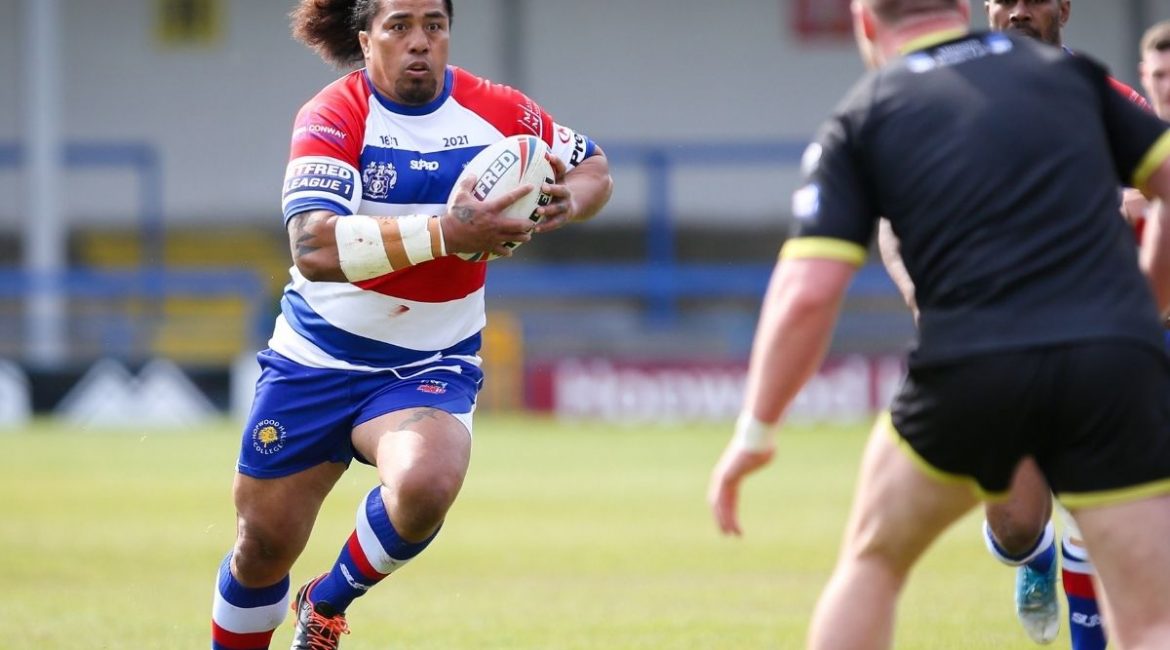 We move on to the next edition of the ‘Ones To Watch’ series with Sunday’s opponents at the Crown Oil Arena, the Rochdale Hornets.

Despite being 40 years of age, veteran Fuifui Moimoi is still impressing as Rochdale’s standout performer to date in the 2021 League One season.

Arriving at the Crown Oil Arena from Workington ahead of the current campaign, Fui is showing that age is just a number with a number of Man of the Match performances throughout the year.

Making his name during a decade long spell in the NRL with the Parramatta Eels, the prop became one of the games most recognisable names and faces with his no nonsense approach to the game.

In over 200 appearances for the Eels, he was a key member of many a great Parramatta team, the most notable of which was the side that reached the 2009 NRL Grand Final.

He also became a star on the international stage for both Tonga and New Zealand, with fans in this country best remembering his famous run-in with Sam Burgess at Huddersfield during the 2008 All Golds tour.

Following the end of the 2014 season, Parramatta would inform the forward that he was not being retained and he made the decision to head to the UK and sign with the Leigh Centurions.

He would spend two years at the Leigh Sports Village, helping the club earn promotion to the Super League in the process, but Moimoi wouldn’t grace the topflight and instead became one of many to leave Leigh and join the Toronto Wolfpack.

Helping the Wolfpack win League One during his first season in Canada, an off-field incident would see Fui depart Toronto and switch codes for a brief spell with the Bradford & Bingley Bees.

However, a quick return to Rugby League would follow as he signed with Workington Town midway through the 2018 season.

Becoming an instant cult hero at Derwent Park, his abilities both on and off the field would impress the Town faithful but the Covid pandemic would bring a premature end to his time in Cumbria as he made the decision to join the Rochdale re-build.

Veteran hooker Sean Penkywicz is once again proving age is just a number as he continues to show why he is one of the best hookers outside of Super League.

Wiley, dangerous, and always a threat out of dummy half and near to the try line, the Welsh international leads the Hornets from the front foot.

Joining Rochdale ahead of the 2020 season from Workington Town, Matt Calland wasted no time at all appointing ‘Penky’ as his new captain.

Making near 400 career appearances for his various clubs and country, Penkywicz knows what it takes to get out of this division after being a member of the Toronto Wolfpack’s 2017 League One winning squad.

Now into the 22nd season of his long and illustrious career, the battle of the nines between Penkywicz and Kyle Kesik could be the difference between the two sides come Sunday afternoon.

Welsh international prop forward Gavin Bennion re-joined the Hornets prior to this season for what is now his third spell with the club.

Re-uniting with his former Chairman at the Swinton Lions, Andy Mazey, the signing of Bennion was seen as a major coup for Rochdale with a number of top end Championship clubs reportedly interested in his services.

Having had Super League appearance with Salford, the Prop originally joined Rochdale ahead of the 2017 season from the Mackay Cutters in Australia with his performances earning him a place in Wales squad for that years Rugby League World Cup.

Bennion the moved onto Swinton and whilst with the Lions, established himself as one of the Championship’s must watch forwards as he continued to impress in the competitive second division and helped Swinton to a 9th place finish in 2019 before representing Wales in the World Nines tournament.

Covid brought a premature end to his 2020 season, which allowed Mazey and Calland to swoop and bring him to Spotland for this year.

Hooker Ben Moores is now into his sixth season at the Crown Oil Arena, having firmly established himself as the club’s longest serving players.

A fans favourite amongst the Hornets faithful, his aggression and pace around the ruck makes him a real threat in both attack and defence.

Arriving at Spotland ahead of the 2016 season following a spell in the Queensland Cup with the Sarina Crocodiles, Moores was integral in guiding the club to promotion to the Championship as they stunned the odds to beat Toulouse Olympique to the League One title.

A product of the Warrington Wolves academy, he would bounce around clubs following his release from the Wolves.

Stints with the Ryland Sharks, Woolston Rovers, West Wales Raiders, and the Sarina Crocodiles would follow before he made Rochdale his permanent home after being one of the first signings of former coach Alan Kilshaw ahead of the promotion winning campaign.

With his position as the club’s first choice number nine secured, he would continue to impress throughout their stint in the Championship.

If he plays on Sunday afternoon against the Cougars, it will be Moores 100th appearance for the club.

Known for his ability to switch positions at ease, and the awkwardness he can cause opposition defences, Syme made the decision to join the Hornets on a permanent basis ahead of the 2020 season following two separate loan spells at the Crown Oil Arena prior to that.