Ones To Watch – Hunslet RL 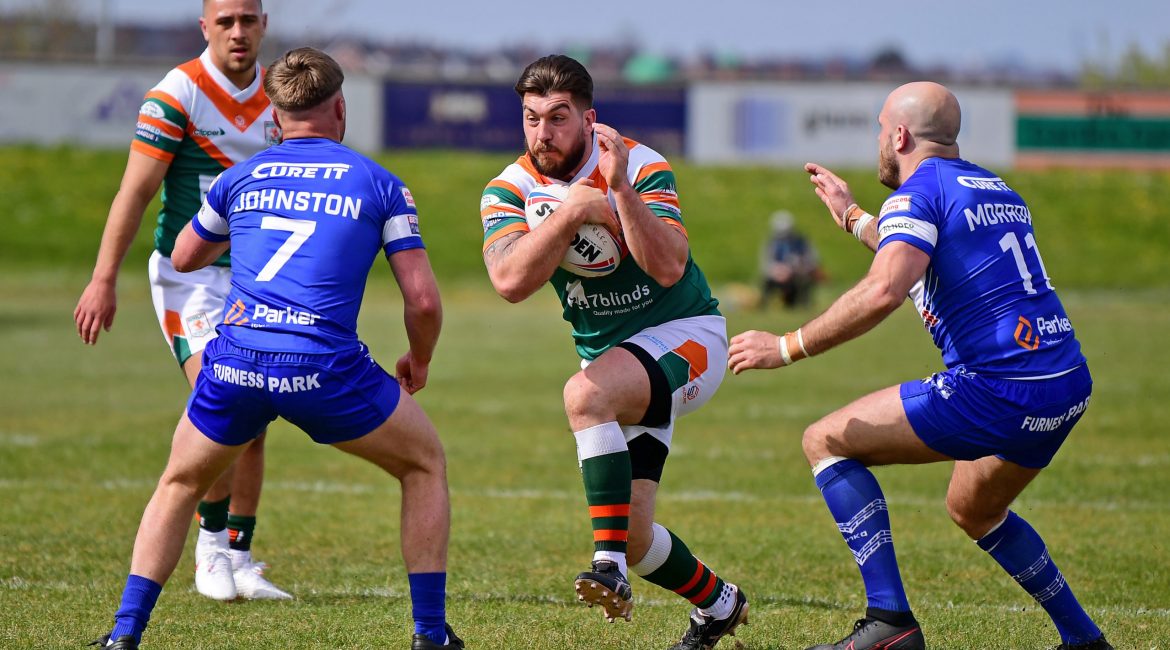 We move on to the next edition of the ‘Ones To Watch’ series with Sunday’s opponents at the South Leeds Stadium, Hunslet RL.

One of the part-time games most experienced and talented half backs, Dom Brambani leads Hunslet on the front foot.

An Italian international, Brambani has played at the highest level with Castleford but made his name in the Championship over a lengthy career that his seen him win honours both individually and with his various clubs and he is regularly praised for his intelligence and reading of the game.

Captain of the Great Britain students side early in his career, he remained in Australia following the tour and was voted Gold Coast Player of the Year during his time with the Hinterland Storm.

Dom would the return to England and his stint at the Jungle was followed by moves to Halifax, Dewsbury, and Sheffield.

During this time, he helped the Rams establish themselves in the second tier following promotion before a massively successful four-year stint with the Eagles that saw him register 855 points as well as winning back-to-back Championship titles and guiding the Eagles to a top four finish in 2015.

His time in South Yorkshire saw him form a formidable partnership with both Simon Brown and Pat Walker, the former of which he has now re-united with at Hunslet and following the 2015 season both Brambani and Walker headed to Mount Pleasant.

He would spend four years with the Bulldogs during another successful spell that again saw him play a major part in an unfancied side securing a top four finish as during his first year at Mount Pleasant, he helped Batley reach The Qualifiers before departing to join Hunslet ahead of the Covid-19 cancelled 2020 season.

Brambani goes into this Sunday’s game with the possibility of surpassing 1,500 career points.

Son of the former Hull Kingston Rovers forward Nick Halafihi, Vila is now into his third season with Hunslet after joining the club in 2019.

Small in stature, but big in talent and speed, his ability to break from dummy half and control the ruck makes him a dangerous player in opposition as well as being renowned for his skill and knowledge of the game.

A product of the Leeds Rhinos academy system, the junior Halafihi returned to the country in 2015 to sign with the Bradford Bulls following a brief spell in Australia with the Penrith Panthers.

During his first year at Odsal, he found chances limited in a talented side that only missed out on promotion to Super League following defeat to Wakefield Trinity in the Million Pound Game.

The following season, as the Bulls won the Championship Shield, Vila failed to make a single appearance for the club but enjoyed loan spells with first Oxford and then the Swinton Lions, as he continued his development.

With financial troubles hitting Bradford, opportunities become more available for the hooker and he broke into the Bulls side over the next two seasons, making 33 appearances for the club, and becoming a key member of the side that won promotion in 2018 as the League One play-off winners.

He departed the Bulls following promotion to sign with Hunslet, turning down interest from elsewhere, but has continued to impress as one of the third tiers top and most promising number nines.

Full-back Lewis Young joined the Parksiders midway through the current campaign on loan from Championship side Newcastle Thunder.

Whether he be at full-back or in the halves, Young’s quickness of the mark and general all-round ability has left many a third-tier defence in tangles over the past two seasons and cemented his place as one of the hottest talents there is in the semi-professional game.

A junior at Redhill ARLFC in his hometown of Castleford, Young continued to progress and hone his skills at local amateur clubs such as the Castleford Panthers and Featherstone Lions before moving to the North East to study at Northumbria University.

Impressing the Thunder coaches in training and also in games at University level for Team Northumbria, Newcastle made the decision to sign Lewis in April 2016, beating off interests from clubs across the leagues to first sign and ever since retain the utility back at Kingston Park.

A member of the club’s 2016 League One Shield winning side that defeated the North Wales Crusaders, winning the club’s Young Player of the Year accolade, the 2017 season really saw Young come into his own as Newcastle rose up the division.

His scintillating form didn’t go unnoticed as Lewis was crowned League One Young Player of the Year and also named full-back in the divisional Team of the Year.

He repeated the feat once more in 2018, before turning down moves elsewhere to stay with the Thunder.

Maintaining his spot at full back despite having players such as QLT alongside him in the Thunder side, he continued to shine as one of the division’s leading lights and was rewarded with promotion to the Championship last season.

However, with Newcastle moving towards a more full-time set-up in the second tier he found chances limited with new arrivals and a more packed schedule and was sent out on loan to the South Leeds Stadium.

The Hunslet captain, Duane Straugheir is one of the competition’s most experienced and highly touted back rowers.

A product of the academy system at the Bradford Bulls, ‘Straff’ began to make a name for himself after departing Odsal to join the York City Knights following a brief loan spell with Featherstone.

Helping the Knights maintain their Championship status, his performances caught the eye of Mark Aston and Straugheir headed to South Yorkshire to join up with the Sheffield Eagles ahead of the 2012 season.

During a six season stay with the Eagles, Duane would make over 150 appearances during an extremely successful period for the former Challenge Cup winners.

His first two seasons saw him play a key role in a Sheffield side that won back-to-back Championship titles in 2012 and 2013 before continuing to impress after the Eagles broke into the top four and The Qualifiers in the 2015 season.

After the Eagles made the decision to go full-time on the back of the 2015 season, Straugheir would only remain in South Yorkshire for a further twelve months before signing with Hunslet.

His strong performances to date in South Leeds have caught the eye and interests of other clubs but the influential captain has stayed loyal to the Parksiders and will be hoping to lead by example as Hunslet look to put together a promotion push this season.

Big, direct, and hard hitting, Alex Rowe is now into his second season in South Leeds after arriving prior to the Covid cancelled 2020 season.

A veteran of the game now at 35 years of age, the London born Prop began his career with the London Broncos before heading north for spells with the Castleford Tigers, Doncaster, Sheffield Eagles, Batley Bulldogs, and Newcastle Thunder, before arriving at Hunslet.

Seen as a coup for the club following his arrival, Rowe turned down interest from several Championship clubs to sign with Hunslet, citing the feel-good factor at the club for his decision to join Gary Thornton’s side.

A Malta international, the Prop forward is best known for his six-year spell with the Batley Bulldogs during which time he made 150 appearances as well as helping Batley achieve a top four finish in the Championship, and qualification for The Qualifiers as a result, in the 2016 season.

Prior to that, he was a member of the Sheffield Eagles side in 2012 that won the Championship title to cement themselves as the best side outside of Super League at that time.

His size and presence will undoubtedly cause problems for the Cougars this Sunday if he is allowed to do so.