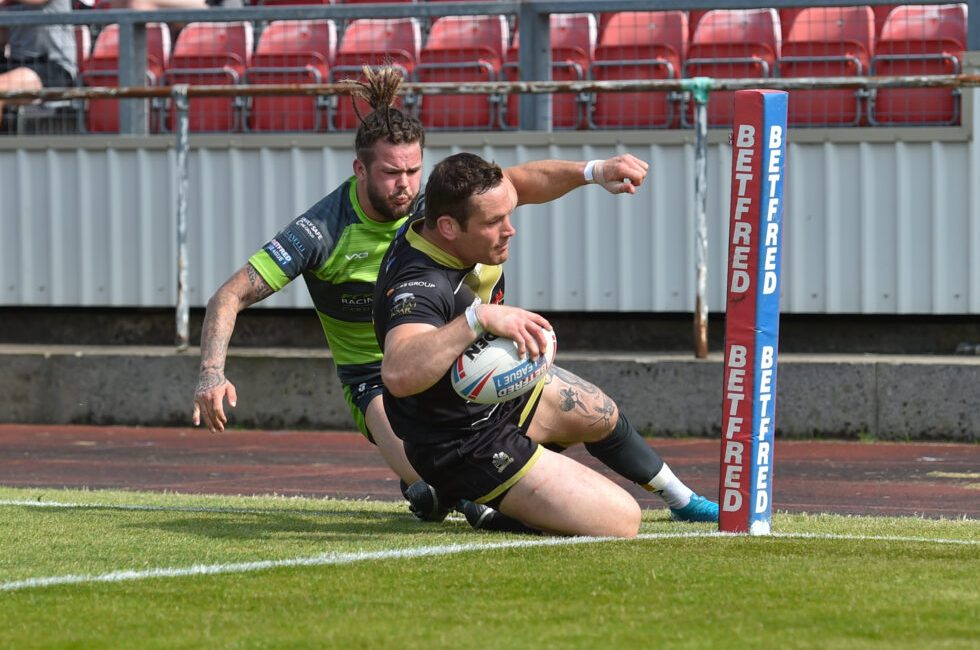 We move on to the next edition of the ‘Ones To Watch’ series with Sunday’s opposition at Colwyn Bay’s Stadiwm ZipWorld in Round 9 of the Betfred League One season, the North Wales Crusaders.

Sitting atop the League One try standings with 11 to his name so far in 2021, Rob Massam still poses one of the divisions most dangerous attacking threats.

Despite the Covid pandemic and injury affecting his first two seasons back at the club, he has more than made up for lost time this season and with 11 tries in 8 appearances to date is back on red hot form.

A man who has caused the Cougars trouble throughout the years, Jono Smith will be looking to continue in that vein after returning to the club following a four-year spell away with Rochdale and Barrow.

The back row forward has always been a tricky customer with his mixture of ball playing ability and try scoring capabilities in attack combined with his efforts and attitude in defence long proving to cause the opposition problems.

And the fans favourite has made the most of being back at the Crusaders on the back of an impressive stint in Cumbria.

A member of the original Crusaders squad back in 2012, Jono signed with the club following their pre-season trials and would go onto become a cult hero amongst the North Wales faithful.

Playing his part as a near ever present and key member of the 2013 promotion and Northern Rail Bowl double winning side, Smith earned a reputation for being deadly near the line as shown by his record of 45 tries in 81 appearances during his first spell.

On the back of an impressive personal season in 2015 that saw him reach near 20 tries and win the iPro Sport Cup, financial troubles at the Crusaders forced Jono to make the move along with several other teammates across the border to Rochdale.

Winning a further promotion in 2016 as a member of the Hornets squad that stunned full-time Toulouse to be promoted as Champions, his performances caught the eye of the Barrow Raiders who were quick to secure his services following their own promotion twelve months later.

He would spend three years at Craven Park, again becoming a fans favourite and linking up once more with Jamie Dallimore as their partnership that proved so fruitful for the Crusaders would become that once more for Barrow.

However, following the 2020 season he made the decision to leave the Raiders and re-join his former club ahead of the 2021 campaign.

Returning to the Crusaders for a second spell on loan from the York City Knights, the highly touted Tyme Dow-Nikau will be looking to impress.

An athletic outside back who can also play in the back row, Dow-Nikau originally joined the Crusaders last season but did not make an appearance as a result of the pandemic before moving onto the Knights.

After featuring four times earlier in the season for York, the return from injury of several players saw his options limited and he returned to North Wales on loan last month and he will be looking to push on and impress further in Colwyn Bay.

From there, he would join the Maitland Pickers and Burri Burri Bulldogs in the Newcastle Rugby League Division as well as featuring for the Newcastle Knights NSW Cup side during his time in the district.

Ahead of the 2020 season, he made the decision to follow in his father’s footsteps and move to the UK to sign with the Crusaders before moving onto York, one of two clubs along with Warrington that his Dad Tawera played for in the 90s.

His towering presence will give a different but challenging sort of opponent to the Cougars pack this Sunday.