Lewis Young To #JoinThePride For 2022 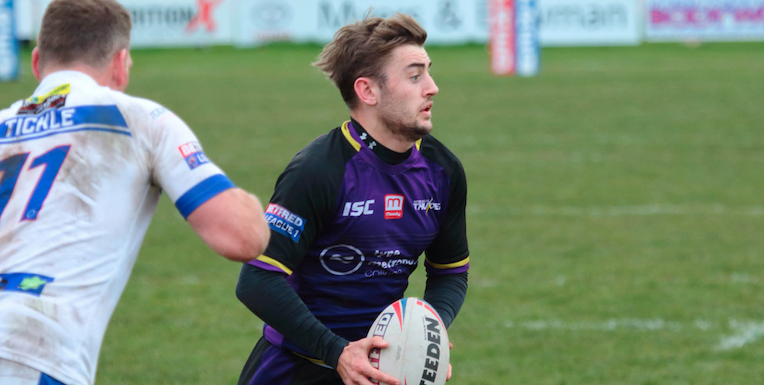 KEIGHLEY Cougars are delighted to announce the signing of Lewis Young.

Arriving at Cougar Park on a one-year deal from the Newcastle Thunder, Young becomes Head Coach Rhys Lovegrove’s first new signing ahead of the 2022 season.

Long touted as one of the games most talented full backs outside of the Super League, his signature is seen as a massive coup for the club and Lewis could not contain his excitement when discussing the next chapter of his career.

“I am excited to be joining the club with the aspirations that the Cougars have for next year,” said Young.

“It is a club on the up and in my opinion, we will be pushing for automatic promotion with the squad that we have.

“After speaking with Jack Miller about the culture at the club, and the conversations that I had with Rhys about the playing style, I knew it was something that I simply couldn’t turn down.

“I’m just excited now to meet the boys next month for pre-season, get started, and hopefully help the club achieve promotion next season.”

Adding a new threat in both defence and attack to the team’s arsenal, Lewis joins Keighley after departing the Thunder following the conclusion of the 2021 season, bringing the curtain down on a sensational six-year career at Kingston Park.

A product of the Redhill community club in Castleford, it wasn’t until he moved north to study at Northumbria University that Young would find his breakthrough in the professional game.

Impressive performances in BUCS Rugby League for Team Northumbria throughout late 2015 and 2016 caught the eye of the Thunder who moved quickly to secure his services.

Beginning life with the newly rebranded Newcastle club in the halves, the decision on the back of a League One Shield victory to move Young to full back ahead of the 2017 season would see him come into his own.

Now a mainstay of the team, the talented 26-year-old continued to produce standout performances whenever he donned a purple jersey.

His quick breaks and elusive running style would result in a potent attacking threat being born as a healthy number of tries followed in a breakout year that would end with the 2017 Betfred League One Young Player of the Year award.

Lewis added substantially to his try-scoring record over the following two seasons and would reach a total of 64 tries in 96 appearances for the Thunder, equalling the north-east clubs try scoring record held by Kevin Neighbour.

However, promotion to the Championship ahead of the 2021 season and a transition to a full-time playing squad for Thunder would see Young’s chances limited and he would spend most of the last season on loan at Hunslet in League One.

Despite having to move back down into the third tier, 9 tries in 12 appearances during his loan spell at the South Leeds Stadium cemented Lewis once more as an attacking threat.

And this would prompt the Cougars rugby management into securing his services for 2022.