Keenen Tomlinson Joins The Pride For 2023 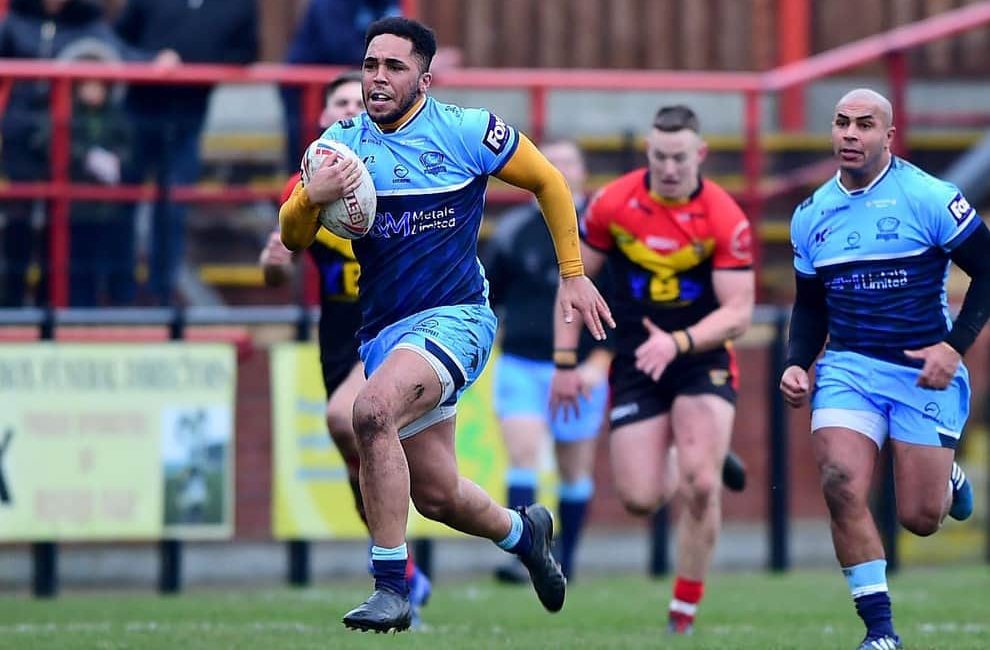 Keighley Cougars are today delighted to announce the signing of Keenen Tomlinson.

As revealed in our 2023 squad number announcement last night, Keenen, son of former Cougars winger Max Tomlinson, has signed a one-year deal and joins the club from the Dewsbury Rams.

Fresh of a history making Rugby League World Cup with Jamaica over the autumn, the versatile Tomlinson was on the lookout for a new club and has found a home at Cougar Park following a successful trial period with Rhys Lovegrove’s side.

And the Keighley Cougars Head Coach is happy to see what a player he knows well can bring to this squad ahead of their return to the Betfred Championship.

“Keenen is a player I know well from my time last year in camp with Jamaica,” admitted Lovegrove.

“He offers me versatility as he can cover a number of positions and a player with his attributes will also be useful in a 30 plus game season like the one we are about to embark on.

“We had Keenen on trial a couple of years back, but he opted at the time to sign with Dewsbury who were of course in a higher league than us at that point.

“He is fast, athletic, and a fantastic human being, which are the attributes I was looking for when we first brought him on trial after the World Cup.

“And he also has that connection with Keighley as a club from his childhood through his dad so again, he knows what is expected of him by not just me, but the supporters also.

“I am happy for Keenen that his trial period was a successful one and I know he can’t wait to rip in starting at Newcastle on Saturday.”

With an ability to cover several positions across the park, Keenen began his rugby journey playing Union for the Moortown club in Leeds before changing codes to sign with Stanningley.

Whilst in the junior ranks at Stanningley, he was scouted by the Bradford Bulls and signed to their youth system.

Unusually though, the then 19-year-old would make his professional debut on the international stage for Jamaica in a 2016 friendly against Ireland.

A club debut would follow in 2017 during a brief loan spell with the London Skolars, Tomlinson would make his debut for the Bulls later that season as the club were relegated from the Championship.

After Bradford fell into the third tier, he would make the decision to leave Odsal and sign with the Batley Bulldogs ahead of the 2018 campaign.

Becoming a vital member of the squad under then coach Matt Diskin, Keenen would prove his versatility by playing on the wing, in the centres, in the backrow, and even at half-back.

Playing a crucial part in helping the Bulldogs avoid relegation from the second tier, he would also make history by helping Jamaica qualify for the Rugby League World Cup for the first time in the Reggae Warriors history.

However, the pandemic would cut short the 2020 season and Tomlinson would depart Mount Pleasant and make the short journey to sign with the Dewsbury Rams.

It would prove two challenging years on the field for the Rams, who would be relegated to League 1 at the end of the last campaign, but Keenen would remain a regular in the Dewsbury side and his performances earned him a World Cup selection in the autumn with Jamaica.

Appearing in all three of the Reggae Warriors group games at the World Cup, he would help his nation of heritage make history and will be looking to carry that into 2023 with his new teammates at the Cougars.

Keenen is available for both corporate and fans sponsorship for the forthcoming season, please ring 01535 606044 or email jakewebster83@gmail.com for more information.