Tigers To Visit For Jake’s Testimonial 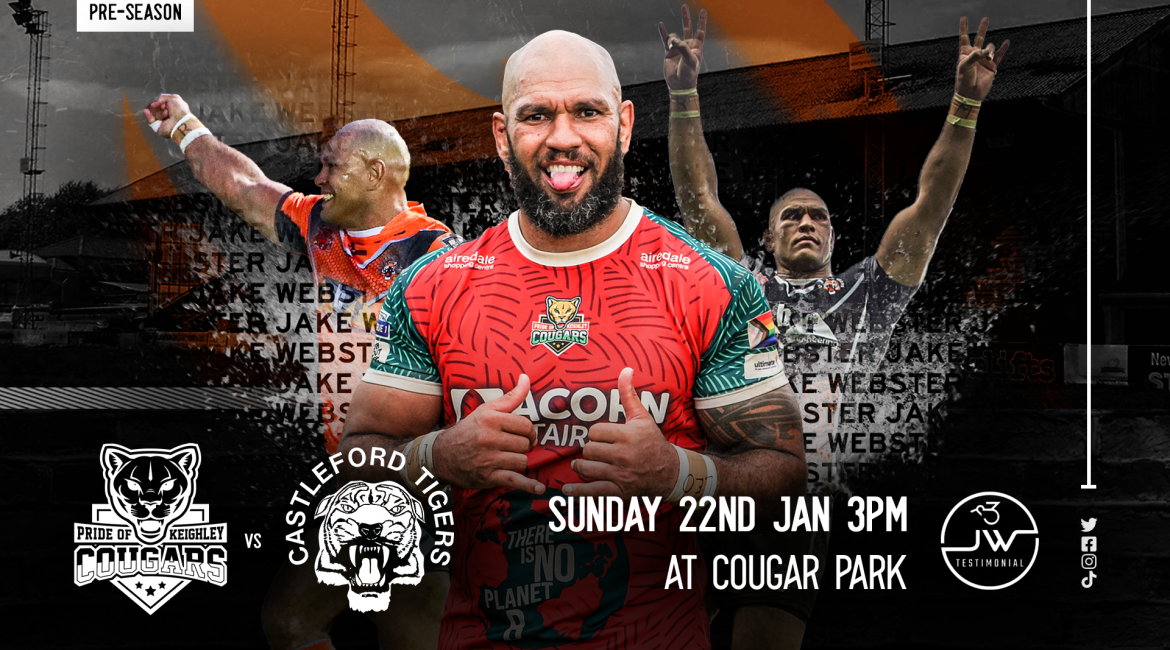 KEIGHLEY Cougars can today announce we will be hosting the Jake Webster Testimonial year match.

The fixture will take place at Cougar Park on Sunday 22nd January, with a 3pm-kick off, as we welcome Jake’s former club, Castleford Tigers of the Betfred Super League.

Speaking of the fixture, Webster said: “I am both honoured and privileged that Castleford have agreed to play in my testimonial match.

“I must spread my thanks to Lee Radford and everyone at the Tigers for accepting my invitation for what promises to be a memorable afternoon at Cougar Park.

“During my career, I spent 6 memorable years at Castleford in which we won the League Leaders Shield and also reached both the Challenge Cup and Super League finals.

“I loved my time at The Jungle, and I know that love was reciprocated by the Tigers faithful.

“Hopefully the Castleford fans will come out and show me that love one more time on the 22nd of January.

“I must also say thank you to the O’Neill family and Rhys Lovegrove for agreeing to allow this fixture to take place and also host it at Cougar Park.

“I’ve taken Keighley not just as a club, but as a town, to my heart and have loved my three years here so far.

“What we achieved in 2022 was special and the club and the Cougar Army have been nothing but supportive of me and my testimonial year.

“Again, I ask you to come out once more to support me. And not just Keighley and Castleford fans, but supporters of Hull Kingston Rovers and the Bradford Bulls also.

“Buy your tickets, your testimonial merchandise, and brochures, and join us to celebrate my career in what will be another afternoon that lives long in the memory at Cougar Park.”

Arriving on these shores with Hull Kingston Rovers, Jake would join the Castleford Tigers ahead of the 2013 season.

Becoming a firm fan favourite and icon on the famous Wheldon Road terraces, 49 tries in 125 appearances firmly cemented the centre into the history books at Castleford.

Helping the club reach the 2014 Challenge Cup Final, it would be the 2017 season which will live long in the memory.

Winning the League Leaders Shield in style, Jake putting in a four try Man of the Match performance against Wakefield that famous evening, the club would reach the Super League Grand Final at the end of that year.

Departing Castleford at the end of 2018, the New Zealand international spent a sole season at Bradford before making the move to Cougar Park.

17 tries in 27 appearances have followed over the past three seasons, with Jake scoring 8 tries in 12 appearances during the invincible season last time around.

Despite making the move to a player-coach role ahead of 2023, ‘Webbo’ will still see his testimonial year run until April of next year and has returned to pre-season training on both fronts over the last fortnight.

Both Jake and the club would like to thank Castleford for their help in arranging this fixture and look forward to welcoming the Tigers players, staff, directors, and supporters, for this special occasion in January.

Admission prices and ticketing arrangements for this fixture will be confirmed in due course on the club’s website and social media channels.