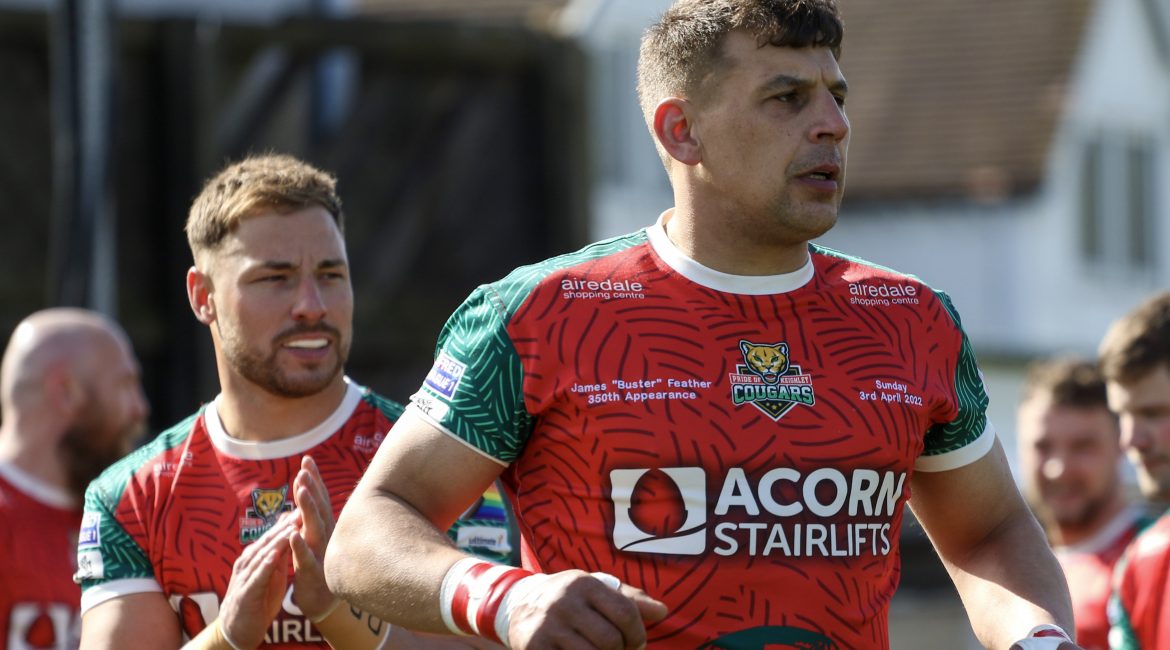 James ‘Buster’ Feather has this morning announced that he is to retire from Rugby League following the conclusion of the 2022 season.

This means that Buster will hang up the boots following a one-club career that has spanned two decades, 365 appearances, a Hall of Fame induction, and now three promotions.

Feather said in an emotional statement: “Well we all feel like this has happened before, but this is officially it.

“This weekend will be the last time I pull my boots on in a competitive game at Cougar Park for the club I’ve loved all my life.

“Two games to go before the boots are officially hung up but this one is the last time that I’ll enjoy the beautiful feeling of playing at home.

“There’s only one person who’s told me to knock it on the head over the last two years and they are right, I’m too old!

“And there will be no U-turn this time.

“There is so many unbelievable everlasting memories that this club has given me over the years, far too many to list but this weekend will be the most special winning the trophy at home.

“I’m so grateful for everyone who has had an impact on my career from 8 years old until now.

“There is far too many to thank but hopefully I get to see you all at Cougar Park this weekend where I can thank everyone personally.

“One man I will thank now is my old man. He’s the best bloke I’ve ever met.

“I’m the luckiest guy to have a father like him, he introduced me to the game and this club when I was a kid and it’s given me the best ever memories.

“He’s followed me everywhere watching every game and even drove the fans bus to get to games.

“All I wanted to do was make him proud and I’m lucky he’s been able to see me play for 20 years and this weekend I’ll get to run out one more time for him on this beautiful ground.

“I’ve met some friends for life through this club and hope to see you all soon.

“2022 champions will be the end of my career. What a way to go out with the best blokes you could wish to play alongside.

“Everyone get yourself down this weekend the lads appreciate the love and support.”

For twenty years, Buster has played for his hometown club with distinction and has stayed loyal to Keighley through both the good times and the bad.

Signing his first contract with the club ahead of the 2003 season, James progressed through the club’s reserve grade side and made his first team debut in a 2006 Northern Rail Cup group stage fixture away at Oldham.

Quickly establishing himself as a first team regular, Buster was appointed captain by then Head Coach Barry Eaton in 2007 following the retirement of Phil Stephenson.

Captaining the side until his first retirement at the end of the 2017 season, Feather would lead the side to two promotions in 2009 and 2011, an iPro Sport Cup triumph in 2016, and carry his teammates on the back of the loss of Danny Jones in May 2015.

The second promotion in 2011 would see him go above and beyond for his club, town, and teammates, as he took to the field just a fortnight removed from breaking his cheekbone to lead the team to Grand Final glory against Workington in Warrington.

Following his first retirement, the club honoured James in 2018 by inducting him into the Keighley RLFC Hall of Fame as a thank you and tribute to his loyal service.

With the club in crisis midway through that year, Buster came out of retirement and helped the side through the turbulent end to the season before being appointed club captain once more for 2019 following the takeover of the club by the O’Neill family.

However, he made the decision to retire once more after the Covid-19 pandemic brought a premature end to the 2020 campaign.

In a twist of fate, Covid would present Feather the chance to take to the paddock once more as he was once again brought out of the smash in case of emergency box after an outbreak amongst the team left Head Coach Rhys Lovegrove short on numbers.

And he took the opportunity with both hands, going on to make more history for the club as he surpassed the late Phil Stephenson’s club appearances record in August’s away victory against the West Wales Raiders and finishing the year on 348 appearances for Keighley.

James had his eyes firmly set on promotion this year and writing the wrongs of the play-offs in 2021 and has achieved that goal whilst playing some of the best Rugby League of his storied career.

In doing so he has fulfilled the promise he made to his late friend Danny Jones, in which he said the last thing he would ever do on a Rugby League pitch was to get their club promoted for him.

He has also surpassed the 350 appearances for the club mark this year and kicked his first ever conversion in April’s home victory against Doncaster.