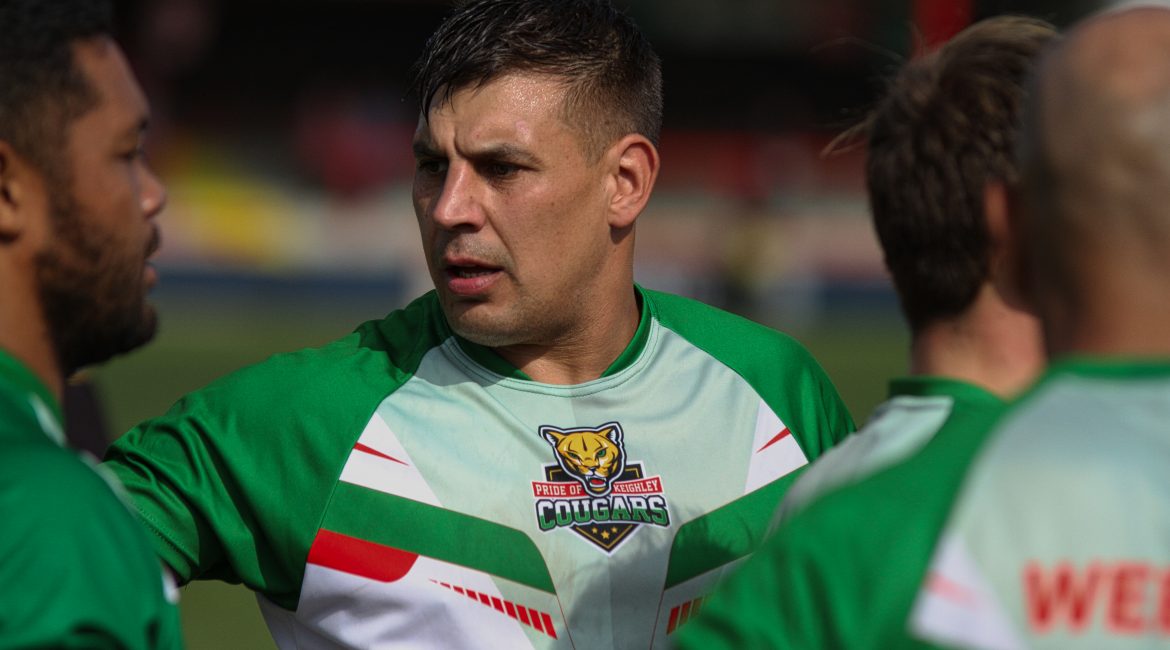 KEIGHLEY Cougars can today announce that club legend James ‘Buster’ Feather has signed a new contract with the club.

Feather, who broke the club appearance record in August, has put pen to paper on a new one-year deal that will see the veteran embark on a 20th season with his hometown club.

And he is looking to end his storied career at Cougar Park on a high in 2022 with an eye to helping develop his younger teammates to carry the torch in the future.

“The reason why I’m carrying on I can’t have that semi-final loss to Doncaster as my last involvement with the club,” admitted Buster.

“It was the biggest loss of my career, so I don’t want to finish my career after that game.

“I’m going to give it all I can at 37 years of age to get fit and help the squad the best I can.

“I’m signing on as a player but more looking towards helping all the players in front of me and pushing them on the training field to hopefully help make them better player for it.

“If it comes to it then that I’m not needed to play all year that means I’ll have done my job in training and the team will be picking up wins and hopefully as a result, grabbing that promotion.

“I dipped my toe into coaching last year and I have to say it is just not for me.

“Fortunately though I had the opportunity to pull my boots on due to Covid and the difference is huge to me.

“I always thought coaching would be my next path in the game, but it is very different to playing, I still am a player and feel I can offer something in our bid for promotion so I’m grateful for the opportunity to carry on.

“This year will be my last year and my role will to be push all the nines and thirteens in front of me and hopefully that will bring out the best in them.

“I’ll still train hard and if then the club needs me to play, I’ll be good to go and give all I’ve got for this team and the club.

Signing his first contract with the club ahead of the 2003 season, James progressed through the club’s reserve grade side and made his first team debut in a 2006 Northern Rail Cup group stage fixture away at Oldham.

Quickly establishing himself as a first team regular, Buster was appointed captain by then Head Coach Barry Eaton in 2007 following the retirement of Phil Stephenson.

Captaining the side until his first retirement at the end of the 2017 season, Feather would lead the side to two promotions in 2009 and 2011, an iPro Sport Cup triumph in 2016, and carry his teammates on the back of the loss of Danny Jones in May 2015.

The second promotion in 2011 would see him go above and beyond for his club, town, and teammates, as he took to the field just a fortnight removed from breaking his cheekbone to lead the team to Grand Final glory against Workington in Warrington.

Following his first retirement, the club honoured James in 2018 by inducting him into the Keighley RLFC Hall of Fame as a thank you and tribute to his loyal service.

With the club in crisis midway through that year, Buster came out of retirement and helped the side through the turbulent end to the season before being appointed club captain once more for 2019 following the takeover of the club by the O’Neill family.

However, he made the decision to retire once more after the Covid-19 pandemic brought a premature end to the 2020 campaign.

In a twist of fate, Covid would present Feather the chance to take to the paddock once more as he was once again brought out of the smash in case of emergency box after an outbreak amongst the team left Head Coach Rhys Lovegrove short on numbers.

And he took the opportunity with both hands, going on to make more history for the club as he surpassed the late Phil Stephenson’s club appearances record in August’s away victory against the West Wales Raiders and finishing the year on 348 appearances for Keighley.

James now his eyes firmly set on writing the wrongs of the play-offs and going out on a high whilst also looking to hit the 350 mark for appearances in Cougars colours.