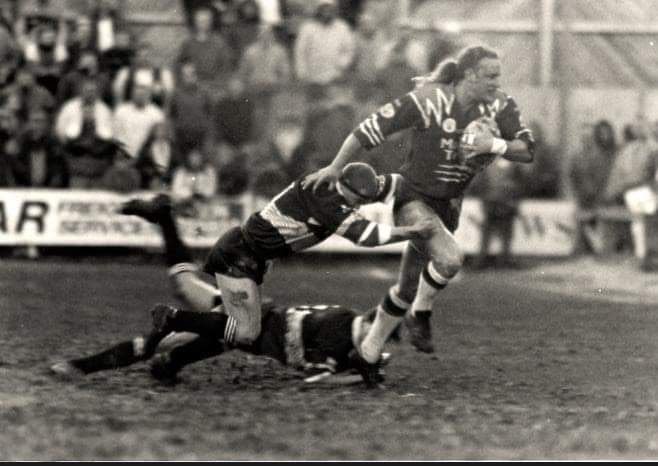 KEIGHLEY Cougars are deeply saddened this morning following the news overnight of the passing of Mark Milner.

A stalwart of the club during the ‘Cougarmania’ era, Mark sadly passed away on the 25th November at 55 years of age.

One of the first signings made by Head Coach Peter Roe in 1993 following his appointment by Mick O’Neill and Mike Smith, Mark became a firm favourite amongst all associated with the club after his arrival from the Featherstone Rovers.

A very popular character with the Cougars faithful, his trademark appearance of long flowing hair down the back of his playing shirt and missing front teeth earned him the nickname of ‘Wild Thing’ during the heyday of Cougarmania.

The Troggs hit song by the same name of ‘Wild Thing’ would also be adopted as his tryscoring music throughout his time with the club.

During his three years at Cougar Park, despite a series of injuries that would impact his playing time, Mark would be a key member of both the 1993 Division Three Championship team and the 1995 Second Division Championship and Premiership double winning side.

Mark loved his time with the club and made many friends for life throughout his time at Cougar Park.

Following his departure from the club, Mark would continue to hold the club in high esteem and named the Cougars as the team he supported and also the club where he played his best Rugby League.

Our thoughts and prayers at this very difficult time go to the family, friends, and former teammates, of Mark.