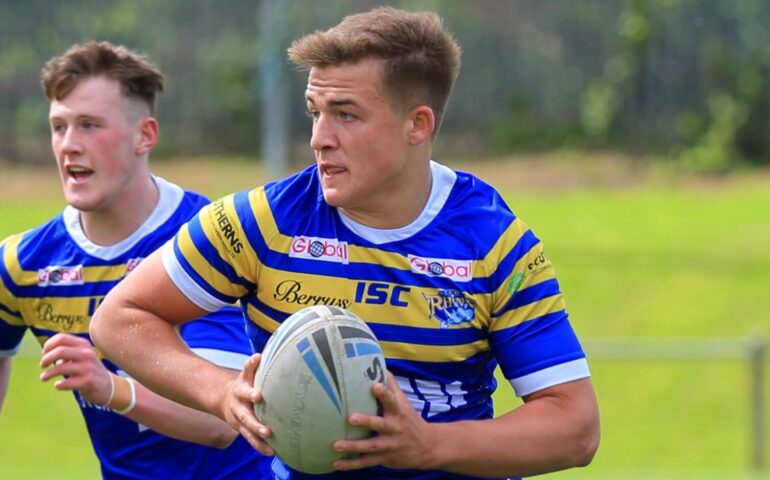 KEIGHLEY Cougars are today delighted to announce we have beaten off stiff competition from clubs both in Championship and League One to the signing of Harvey Spence.

The half-back arrives at Cougar Park for the 2022 season on a two-year deal following the expiration of his contract at Betfred Championship side Featherstone Rovers.

And the 21-year-old is already chomping at the bit to get started in his new home with Championship ambitions firmly in his sight.

“I’m really happy to have signed at Keighley for the 2022 season,” said Spence.

“I’m looking forward to pre-season getting underway and to have the opportunity to work with Rhys Lovegrove and the rest of the boys.

“The big goal for this season is promotion and hopefully we can achieve it.”

Signed by the Rhinos at a young age for their Scholarship system, Harvey would work his way through the ranks at Headingley prior to departing at the end of the 2020 season.

Winning five Leeds and District Cups whilst within the Leeds Junior Club system, the silverware followed as he would be a key part of the Leeds Rhinos team that defeated Wigan Warriors in 2018 to win the Academy Championship.

Only missing four games during that 2018 title winning season, Spence continued to feature regularly within the halves for the Rhinos academy team that also featured current Cougars forward Spencer Darley who recommended the club highly to

Given the chance to play for the first team in pre-season ahead of the Covid-19 affected 2020 season, his impressive performances for both Leeds and Featherstone on dual-registration caught the eye of then Rovers coach James Webster.

Webster acted quickly to secure the half-backs services on a permanent basis ahead of the 2021 campaign after his time with the Rhinos came to an end.

He would not feature regularly for the Flatcappers but would be a part of the side that won the 1895 Cup at Wembley, coming off the bench during the 41-34 victory over the York City Knights.

With chances limited at the Millenium Stadium after Wembley, Harvey moved on loan to Oldham for the second half of the season.

Despite becoming a regular in the side under Interim Head Coach Brendan Sheridan, he would continue to impress but was unable to help prevent the Roughyeds relegation to League One.

Returning to Featherstone following the completion of the season, a number of clubs in both the Championship and League One would vie for his signature but the Cougars would be the club to secure his services.

And Mick O’Neill MBE is delighted that Spence has decided to make Cougar Park home.

“To be able to beat so many clubs to a player as outstanding as Harvey is all that needs to be said really,” beamed the Cougars Chairman.

“Harvey has ambitions that are the same of the club, to develop into the best that we can be and push for that promotion to the Championship.

“Rhys and Andrew Henderson are putting together a youth movement in order to build a talented and winning young side that complements the experience of our older end.

“We know as a club that we really need to be fired up both and off the field this year to achieve our goals.

“We’re doing our part by bringing these exciting new players and now we hope the fans will do their part too by coming down in their droves.”