Getting To Know – London Skolars 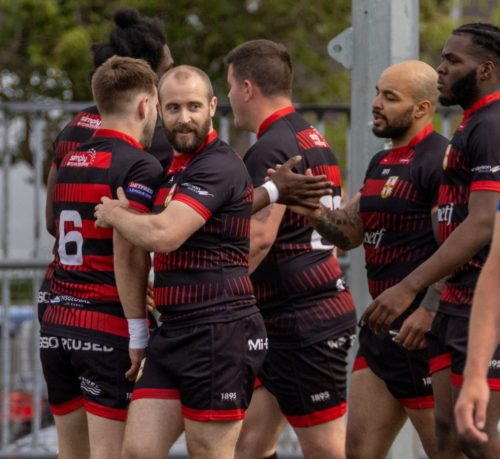 In the latest of our preview series for the 2022 season, Getting To Know, Josh takes an in-depth look at opponents this Saturday, the London Skolars.

This returning Joe Mbu was left with little in terms of structure and time, but immediately set about rebuilding the squad.

Things started brightly for the new coach and new look squad, as they began their season with a Betfred Challenge Cup victory over capital rivals, the London Chargers.

Their reward was another home tie against community opposition in the shape of Hunslet Club Parkside, however, the NCL Premier Division side had too much for their semi-professional opponents on the day and would send the Skolars crashing out of the competition on the end of a giant killing.

The opening day of the league season, despite defeat, brought with it some promising signs.

The lead Hunslet 12-4 into the early stages of the second half, but a red card would leave the Skolars with a man disadvantage for the last half hour of the afternoon and the visitors from south Leeds took full advantage by scoring 24 unanswered points to return north with the win.

After their bye week in Round Two, they returned to action once more at home for the visit of the North Wales Crusaders. But they never got a sniff against the then high-flying side from Colwyn Bay and limped to a 6-54 home loss.

Their first away game of the season against the Midlands Hurricanes showed promise during the first half, and they were level as the opening forty reached its conclusion.

But the Hurricanes would pull away, inspired by their dummy half play, and inflict another heavy loss on the men from the capital.

A home defeat against the Rochdale Hornets was followed by a club record 96-0 thrashing by the Cougars at Cougar Park.

Further losses away at Swinton and at home to Doncaster left the club at the bottom of the table, but a resurgence followed with three straight victories.

The Skolars would stun Oldham with a comprehensive victory in the Friday Night Lights game and they backed that up with back-to-back away victories against fellow table dwellers Cornwall and West Wales.

These three victories and some significant squad strengthening meant that back-to-back losses to Swinton and North Wales were battling ones, with the loss at the Crusaders last time out only coming in the game’s final ten minutes.

This will be a different side and test to that which awaited Keighley in the return fixture back in May and promises to be one of the toughest tests of the season so far.

Returning to the club for a second spell in charge of the Skolars this winter, Joe Mbu will be looking to recreate the success of his previous spell.

Replacing his own successor Jermaine Coleman after his decision to leave and take the London Broncos job ahead of the 2022 season, Mbu has set about rebuilding a squad decimated by departures over the off-season.

And whilst the start to the season has been difficult, with a Challenge Cup victory against the London Chargers their only win of the year so far, the signs of the first victory of the league season are there as the team continues to gel.

Born in Zaire, Joe would move to London as a child and beginning his career in Rugby League as a junior with both the Skolars and the London Broncos.

Following his retirement from playing, Joe moved straight into coaching and oversaw the London Skolars under-16 side in 2010 before making the step up to Head Coach of the first team following the departure of James Massara.

During his first spell in charge of the club, the former Skolars player would oversee a transformation of the side that saw them rise from the foot of the table to a team that would regularly challenge at the right end of the League 1 table.

After a difficult first season in 2011, the club were unlucky to miss out on a play-off position during the 2012 season as they only saw their season ended early on the virtue of Oldham picking up more losing bonus points throughout the campaign.

There would be no heartbreak though the following season, as Joe would lead the club to what is to date their most successful season in the semi-professional ranks.

The club would win 10 of their 16 regular season games and qualify for the play-offs, finishing 4th level on points with third placed Rochdale who would go onto achieve promotion.

Away from the league, Mbu would also lead the club to the Northern Rail Bowl final at Halifax, where they would be defeated by the North Wales Crusaders.

However, the team would fail to qualify for the following season’s play-offs and the two parties would part ways after a poor start to the 2015 season.

In his time away between spells as the Skolars coach, Joe would launch and become Head Coach of the Nigeria national team in Rugby League with his work attracting players from Super League to declare themselves eligible as the sports grows in the African nation.

Returning to the club midway through this season, Lameck Juma brings experience, size, and freakish athleticism, to the Skolars backline.

One of then players who followed Jermaine Coleman across the city from Haringey to Wimbledon to join the Broncos over the winter, Juma was a regular at the start of the season in the Broncos side.

However, with the club in the Championship relegation zone, Coleman was sacked in late May, and the centre made the decision to return to the Skolars for the remainder of the year.

A perfect mixture of size, speed, skill, and power, Juma is a mainstay of the Skolars side and offers plenty whether he be playing in the centres or in the back row.

Popular amongst his teammates and supporters alike, the versatile player has made nearly 100 appearances for the club.

Prior to the Covid-19 pandemic hitting, Juma had scored 23 tries in 63 appearances and continued his form following the return to action last year either side of his spell with the Broncos.