Getting To Know – Rochdale Hornets 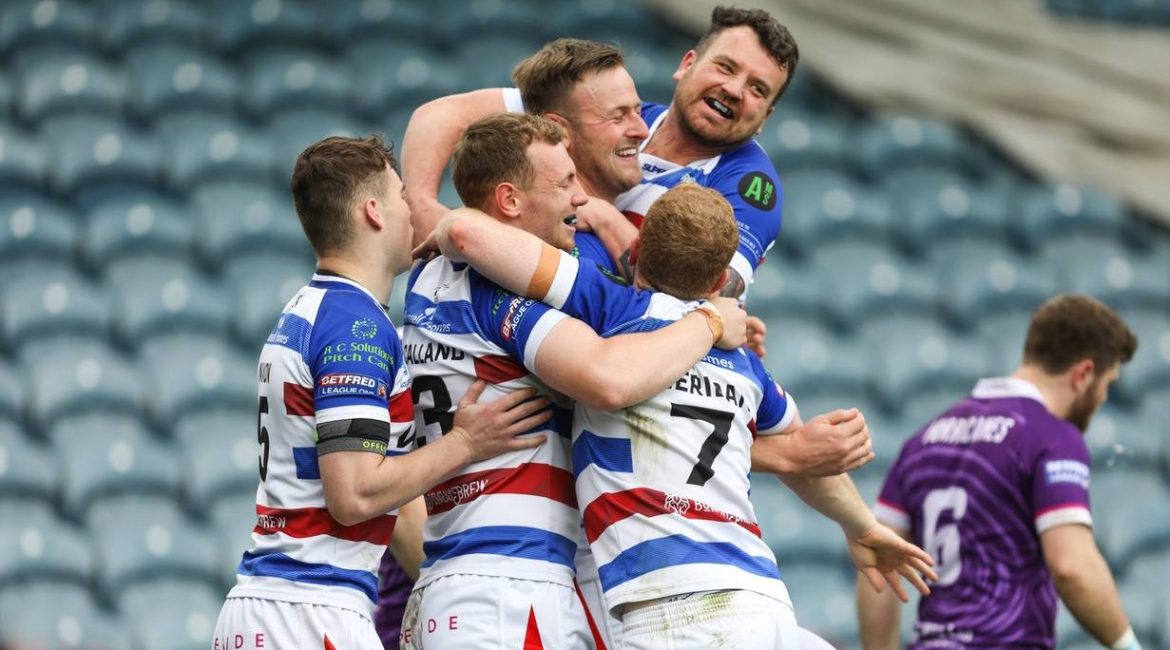 In the latest of our new preview series for the 2022 season, Getting To Know, Josh takes an in-depth look at our visitors to Cougar Park this Sunday, the Rochdale Hornets.

The Rochdale Hornets have been amongst the front runners of the third tier so far in 2022.

After a disappointing end to the 2021 season that saw the Hornets become the northern club to miss out on the play-offs, Matt Calland oversaw an off season rejig of his squad.

The additions of Gregg McNally and Connor Aspey was blended with fellow new recruits of both youth and highly touted players from the community game.

Progression through the early stages of the Challenge Cup gave the new look squad a chance to familiarise themselves with each other but their road to Tottenham was ended in the Fourth Round at the hands of Barrow.

Once into Betfred League 1 action, the Hornets couldn’t have faced a tougher league opener as they welcomed the North Wales Crusaders.

In a breathless game though at Spotland, Rochdale recovered from a slow start to take the game right to the wire, but it wasn’t to be as the Crusaders held out for a 34-36 victory.

This though would be the only blip on the record, as the Hornets have gone onto win six consecutive games since as they have been inspired the half-back pairing of Chase and Lewis Sheridan throughout April and the first half of May.

A routine win away at the West Wales Raiders was followed by a comeback victory at home to Hunslet in a fiery encounter on an afternoon where Sheridan came off age to marshal his side to victory.

Another home win came against arch-rivals Oldham at Easter as again the Hornets came from behind, this time after losing Callum Marriott to a contentious red card midway through the second half.

Back on their travels with consecutive long journeys in late April and early May, they had to work hard for victory in the capital as Tom Ashton marked his return from injury with a four-try haul to defeat the Skolars.

This was backed up the following weekend where Chase was at his very best in the driving rain to inspire the Hornets to a 50-0 victory over Cornwall before a third straight home win over the Midlands Hurricanes last time.

Appointed Head Coach midway through the 2019 season, Matt Calland is now into his third full season in charge of the Rochdale Hornets.

Calland brings with him a wealth of experience, a winning attitude, and a no-nonsense approach.

Seen as the missing piece of the puzzle that the Hornets had been trying to put together for a number of years, he is a local coach whose experience of the game in Rochdale is second to none.

And Matt is deemed by many at Spotland of having an unrivalled knowledge of player development through his work managing the Hopwood Hall rugby league academy.

Joining the club as they were on their way out of the second tier, relegation was inevitable, but this would allow Calland to assess his squad.

However, following their relegation from the Championship, he was tasked with rebuilding the side with limited resources.

Using his connections with the local community game at Rochdale, he brought previously unearthed gems up to semi-professional level to provide a solid core for the new look Hornets.

The pandemic brought with it not only a premature end to the 2020 season, but the arrival of the ambitious Andy Mazey as the new owner of the club.

Whilst the club missed out on the play-offs in 2021, they put the building blocks in place for a promotion challenge this season.

And so far this year, Matt has delivered as he has coached his sides to 6 wins out of 7 to put them right in the promotion mix with the Cougars, North Wales, and Swinton in the division’s opening stages.

Despite being born in Widnes, he is no stranger to the town of Rochdale, and especially the Hornets as a club.

During a player career that would bring a Super League title with the Bradford Bulls, Calland would have three separate spells at the Crown Oil Arena during his glittering career.

Following retirement, he moved into coaching and would be appointed the Halifax Panthers head coach during the 2008 season after two years in the assistant role.

He set about bringing immediate success to The Shay, leading Fax to the Championship title in 2010 as they staged a remarkable comeback in the Grand Final to defeat the Featherstone Rovers in extra time.

However, Matt would depart the club following the conclusion of the 2011 season and move into the community and college games by becoming head coach of Rochdale Mayfield and overseeing the academy at Hopwood Hall.

And success would be delivered on both fronts with many a player being developed and produced for both the Hornets and Mayfield as well as many other clubs throughout the pyramid.

This success attracted the Hornets who appointed Calland as successor to Carl Forster after a disastrous start to the 2019 season.

In a Rochdale team full of star names, the standout performer of 2022 to date has been half-back Lewis Sheridan.

The half-backs energetic performances and outstanding attacking play of the ruck has led to him receiving plaudits and a place in the division’s first team of the month of the new campaign.

A long term player of Matt Calland in both the professional and community ranks, when his side are attacking or on the front foot then Sheridan will always be at the forefront.

Contributing so far this year with 8 tries and 43 goals, for a return of 118 points, the division’s lead points scorer after the opening 7 rounds will be a prominent threat come 3pm this Sunday afternoon.

A product of the Rochdale Mayfield community club, Lewis initially impressed in the National Conference League once he reached the open age game.

After his coach Matt Calland took the Hornets job in 2019, he set about rebuilding the squad which included signing a group of highly touted players from the National Conference League.

Amongst these players was both Lewis and his brother Declan.

Lewis quickly established himself as a regular in the side as they were relegated from the Championship, scoring 2 tries in 11 appearances.

He continued his fine form with a further 4 tries in 3 appearances before the 2020 season was curtailed by the pandemic.

As the game returned in 2021, Sheridan continued to star despite Rochdale’s struggles that saw them miss out on the play-offs at the end of the year.

However, he has taken the League 1 season by the scruff of the neck so far in 2022 and is on a mission to ensure his team are right in the promotion mix come the business end this time around.