Getting To Know – Oldham RLFC 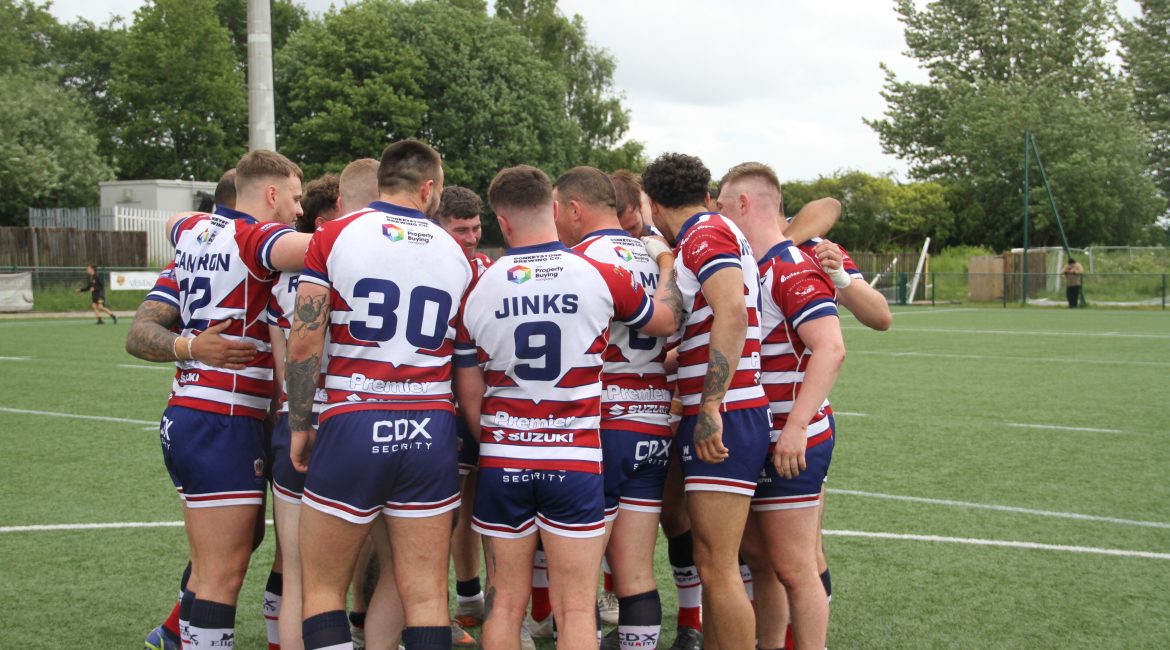 In the latest of our preview series for the 2022 season, Getting To Know, Josh takes an in-depth look at our opponents this Sunday, Oldham RLFC.

Oldham RLFC have endured a difficult first half of the season that leaves the on the backfoot in the race for the play-offs.

Chris Hamilton acted quickly to appoint Stuart Littler as his new Head Coach as Brendan Sheridan held the fort towards the back end of 2021 after the dismissal of Matt Diskin with relegation all but confirmed.

After a 24-all home draw with the Wakefield reserves side in a friendly, the new look Roughyeds first taste of competitive action came against community club Lock Lane in the Betfred Challenge Cup.

However, on a night to forget for the club, they were defeated by the Castleford based amateurs after three separate floodlight failures to suffer their first ever Cup defeat to a community club.

An apology followed, but despite two more friendly victories the League 1 campaign to date has turned into one to forget.

Round One of the season brought with it optimism before the game and disappointment after as the Keighley Cougars blew the Roughyeds off their own patch.

Despite squandering an 18-point advantage to only draw at Hunslet this week after, it appeared the corner had been turned the following week as they racked up a 100-4 home win against the West Wales Raiders.

However, a combination of injuries, suspensions, and players leaving the club as quickly as they had joined, left Littler down to the bare bones after just three rounds.

Despite the acquisition of some shrewd loan signings to plug the gap, a run of 5 defeats in their next 6 outings would follow to leave Oldham adrift of the play-off places.

Defeat at the hands of arch-rivals Rochdale Hornets over easter was somewhat eased the week after as they picked up two points at the expense of Cornwall.

A narrow loss away at Doncaster, a game in which they led, inflicted a further setback before a loss to North Wales Crusaders, a result that somewhat flattered Littler’s side on the scoreboard.

Things would go from bad to worse though on Friday Night Lights as they lost away at the London Skolars, becoming the first team to lose to the side that had started the game that evening rooted to the foot of the table.

It does seem though that the tide may be turning, a battling loss in difficult conditions against Swinton was backed up last time out a 66-0 mauling of the Midlands Hurricanes.

Newly appointed ahead of this season following the club’s relegation, Stuart Littler has not had the easiest start to life with Oldham.

Littler’s decision to arrive at Whitebank in the winter saw him return to the club coaching scene after his four-year spell as Swinton Lions Head Coach was brought to an end in July of last year.

His Roughyeds tenure began with a Challenge Cup defeat to community club Lock Lane, but things looked positive as he was hoping a solid run of friendly victories would turn the tide going into the League 1 season.

A heavy home defeat to Keighley in Round 1 appeared to be a minor blip as they bounced back with a draw against Hunslet and victories over the West Wales Raiders and Cornwall.

With injuries and suspensions taking its toll, Littler would struggle to keep a balanced side as he looked to plug the gaps with several loan signings of young players higher up the pyramid.

This would show as a series of disjointed performances saw the side lost 5 out of 6, including a run of four consecutive defeats across May and early June.

However, battling defeats to the previously unbeaten North Wales, and local rivals Swinton, and a comprehensive 66-0 home victory over the Midlands Hurricanes last time out will have the highly respected Littler believing his side are tiding the turn heading into the second half of the season.

As a player, Stuart played as a centre for four clubs domestically and internationally for Ireland. His 112 tries during a 12-year stint with the Salford Red Devils means that to this day he is the club’s joint all-time leading try scorer alongside David Watkins.

Following his retirement from playing, Littler initially served as John Duffy’s assistant coach at the Swinton Lions before stepping into the hotseat in July 2017 after Duffy departed to take the Featherstone Rovers job.

He would make an immediate impact at Swinton, keeping the club in the second tier before exceeding expectations in 2019 as he guided the side tipped for relegation to a 9th place finish in a season which included a memorable away victory over promotion hopefuls Toulouse Olympique.

Away from Heywood Road, Stuart had a spell as Head Coach of the Ireland national team, leading them into the 2017 Rugby League World Cup and the European Championship and 2021 World Cup qualifiers that followed before leaving his role with the Wolfhounds earlier this year.

However, after Covid-19, the Lions struggled, and the decision was taken for the two parties to part ways after the club failed to win a single match all season prior to his departure.

Brought into the professional ranks ahead of this season by the Roughyeds, full-back Owen Restall has wasted no time become a standout player for the club.

Signed from Underbank Rangers following their resignation from the National Conference League, Restall has firmly established himself as Oldham’s number one and sits second in the divisional try-scoring charts after the first half of the season.

His form this year also caught the eye of Wales coach John Kear who rewarded the full-back during last week’s internationals with his first call up for the Dragonhearts for their friendly lose to France across the channel.

Owen will now be looking to continue his form during the second half of 2022 and push for a spot in the Wales squad for this autumn’s Rugby League World Cup.

Choosing Oldham over offers from other professional clubs after turning down the opportunity to go pro before the pandemic, he was firmly established as one of the community game’s top talents.

A key part of the Underbank Rangers squad that reached the Fourth Round of the Challenge Cup in 2020 against Bradford, two years previous Restall had featured for the England Community Lions Under-23 side in a Nines Tournament held in Australia.

The captain of the Underbank side, he would lead the club to the top of the NCL, as well as that famous Cup run, before the pandemic forced the club to resign from the top level of the community game.

Prior to that he had come through the ranks of the Newsome Panthers, staying at the club until he attended University.

But the 26-year-old has more than made his mark so far in the professional game since arriving at Whitebank, and will pose a dangerous threat out the back for the Cougars as he did in March’s reverse fixture.