Getting To Know – Midlands Hurricanes 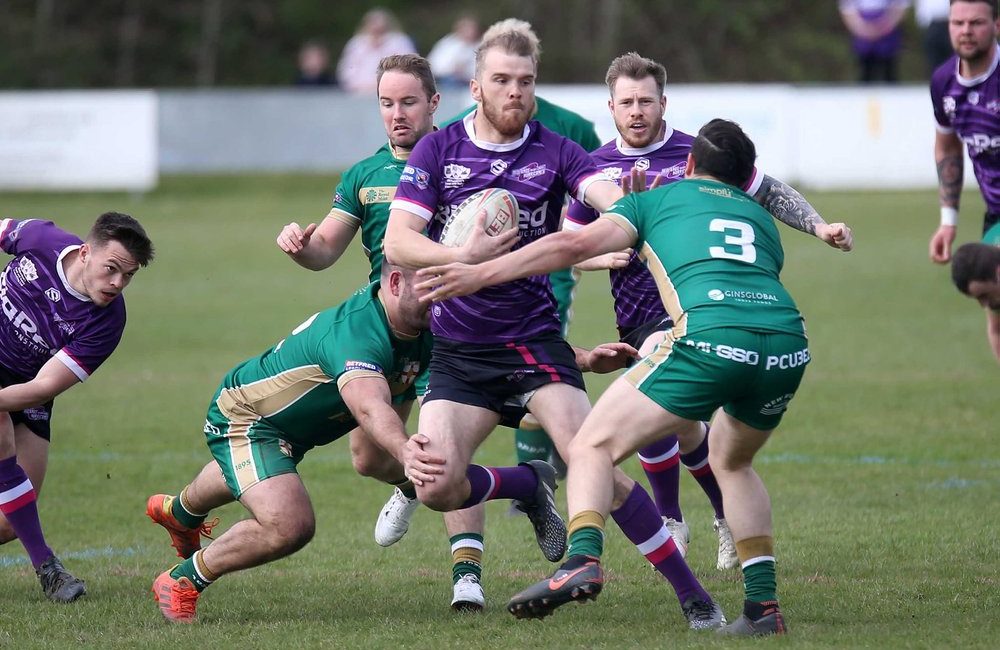 In the latest of our new preview series for the 2022 season, Getting To Know, Josh takes an in-depth look at our hosts at Portway this Sunday, the Midlands Hurricanes.

The Midlands Hurricanes have embarked on both a new season and new journey in 2022.

Ahead of this season though the club underwent a mass transition with a new name, new identity, new home, new look, and new owners.

The Challenge Cup draw away at the Rochdale Hornets brought with it an early loss, but also some long-term injuries, however the club would continue to push on ahead of the new League 1 season.

The following week brought the Hurricanes historic first ever home game at their new home of Portway.

However, they would run into a Swinton Lions side who at the time were playing some sensational Rugby League.

But they would go from having their party spoiled to being the party poopers in their own right as they thrashed Cornwall in the first every Rugby League match played in the Duchy and backed it up the following week with a home trashing of the London Skolars.

With two wins on the board, some new additions to the squad, and the return from injury of some of those lost earlier in the campaign, the Hurricanes continued to be a real threat despite not adding more victories to the league table.

The North Wales Crusaders had to come from behind to record a narrow four-point victory and maintain their undefeated start to the campaign before more heartbreak followed the week after as Hunslet escaped Birmingham with a one score win.

They were then level at the break with the Rochdale Hornets, but a second half resurgence from the Hornets got them over the line on a sweltering afternoon.

After pushing the Cougars close at Cougar Park the week after losing their Head Coach to suspension, they picked up a third win of the year against the West Wales Raiders before an uncharacteristic thrashing at the hands of Oldham threatened to derail their season.

However, despite a further three defeats against teams in the promotion picture since then, they will be confident of giving the Cougars another tough test as they did in May’s reverse fixture.

Despite his suspension earlier in the year, the Hurricanes have stayed loyal to Richard Squires, a coach who is looking to continue to build on the back of the successful 2021 season.

Despite the then Coventry Bears finishing in 8th position after the season was completed, Squires had the team tipped to struggle within three wins of a play-off place after a year in which they both competed and defeated most of the traditional heartland clubs.

His sides efforts on the pitch did not go unnoticed by his peers, and Richard was nominated for the League 1 coach of the year award at the conclusion of the year.

Despite missing out though, he made the most of the opportunities presented by the club’s rebrand during the off-season to recruit players from the traditional clubs to bolster his squad as they look to again challenge for a play-off position this season.

Earning a Bachelor of Science in Sports Science at Northumbria University, Richard began his coaching career in the sport with several roles within the student and community games.

After coaching with the Great Britain Pioneers development squad before moving to the professional game with the City of Hull development academy.

During his two years with the academy, he would work with and coach youngsters both on and off the pitch and help develop players the first team and academy sides at Hull FC.

Squires would also work in the community as one of the Airlie Birds community coaches and dip his toe into the student game as Head Coach of Hull University.

Departing the black and whites in 2018, he would go on to be appointed as the Head Coach of the Hull Dockers in the second division of the National Conference League.

Richard would have a sole season in charge of the Dockers, as the club struggled but ultimately avoided relegation from the third tier of the NCL structure.

He would then head south to Coventry, being appointed as Assistant Coach to Tom Tsang whilst also working within schools as a community coach for the Bears.

However, the global pandemic would hit, and this saw Tsang depart for pastures new as the Reserves Head Coach at the London Broncos following the cancellation of the 2020 season.

In August 2020, Squires was promoted to the top job with the club and used his connections back north to assemble a competitive squad of players from those who had departed the traditional heartland clubs.

A competitive season followed as the club took a number of high-profile scalps in a play-off push, but despite missing out on the top six, his accomplishments were recognised with a place on the coach of the year shortlist.

Following the clubs rebranding and relocation, Richard has again recruited well and despite only three wins so far in 2022, they have again tried their level best to disrupt the divisional hierarchy.

Despite only being a Keighley Cougars player for the small matter of 48 hours back in 2019, Hurricanes captain Liam Welham has been a thorn in our side every time we’ve met since.

Despite never playing a game for the club in his brief spell with the Cougars, Liam is a veteran of the semi-professional game having played for a number of sides within the Championship and League One.

And since joining the club ahead of last season, along with his brother and another ex-Cougar in Matt, he has established himself as a leader on and off the pitch within the squad and has also quickly become one of the Hurricanes standout performers.

Coming for an established Rugby League family that has produced a number of professional players to the game, most notably Kris, Liam began his professional career at home in Hull.

Playing for the academy and reserves sides at both Hull FC and Hull Kingston Rovers, he would not make his senior debut until he departed the latter to sign with the Featherstone Rovers.

Whilst the Rovers lost in 2010, they would lift the trophy in 2011 when Liam would spend a brief period on loan at the Dewsbury Rams as he looked for more regular gametime.

Departing the Rovers after the 2011 season, he joined the Hunslet Hawks but would not be able to help the club avoid relegation from the Championship.

After the Hawks dropped into the third tier, he would move on again to Doncaster.

It was here where Liam would spend six seasons and cement himself as a Dons favourite during his time at the Keepmoat Stadium.

Scoring 17 tries in 68 appearances in South Yorkshire, he would be a mainstay in the 2014 side that under Paul Cooke defied expectations to finish 4th in the Championship.

However, success came at a price as many of the Dons top players left the club and they would be relegated the following year after finishing bottom of the pile.

Staying loyal to the club following their relegation, the centre would continue to be a regular under Gary Thornton, but they would fall in the play-offs before playing opportunities become limited.

This came to ahead in 2019 as Liam would depart the Dons to sign with the Cougars, but he would spend the remainder of that season in the community game with Myton Warriors.

During the pandemic, he would take part in a number of charity and fundraising exercises and was rewarded with the Hull FC clubman of the year accolade for this work in 2020.

Returning to the professional ranks with the Hurricanes for a brief spell in 2020 and then full-time from 2021, it’s safe to say that Liam hasn’t missed a beat during his two years away on and off the pitch.