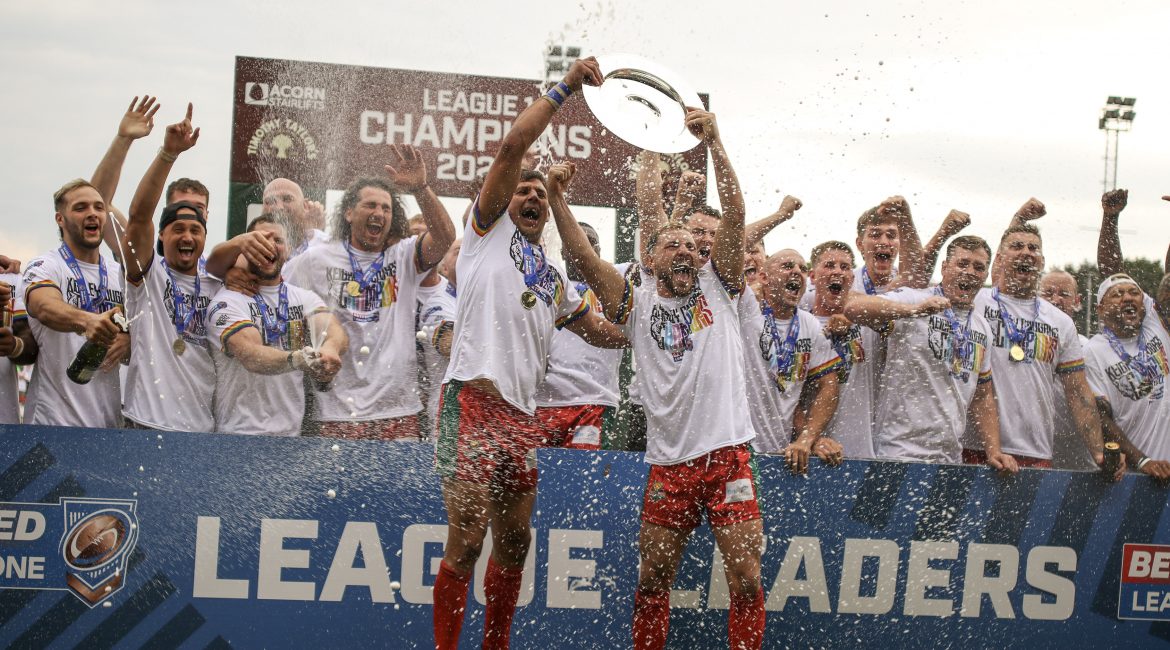 It has been a memorable season for the Keighley Cougars, as they have been promoted as Champions of Betfred League 1.

Over the weekend we will review the season, finishing with part two below which is looking back at the second half of the season.

Fresh from a week off after the Cornwall game, the club strengthened once more with Junior Sa’u and Eddy Pettybourne arriving at the club.

And both of them debuted in style, as the Cougars blew Oldham off the park with a scintillating 68-0 victory. Junior even helping himself to a try on his first appearance in red, white, and green.

Cougar Pride would follow, the biggest of the three pride events to have happened yet, as the West Wales Raiders arrived in town.

Another big home win, and another clean sheet, ensued as the biggest party of the summer was celebrated in true Cougars style.

From party to calamity as the boys prepared for the trip south to the London Skolars.

At 8:30pm on the Friday evening, the Rugby Football League cancelled the game as the Skolars were unable to provide the appropriate medical cover for the fixture.

As a result, we were awarded a 48-0 victory by the operational rules tribunal.

The defence would continue to shine, a fourth consecutive clean sheet on a blistering hot day at Cougar Park.

Cornwall this time the side who couldn’t breach the Keighley line as their first visit to Cougar Park ended in a heavy loss.

Ironically, the man who eventually breach the Cougars defence after 355 minutes was one of our own players.

Despite a 54-6 victory against the Midlands Hurricanes, it was loanee Chris Cullimore who breached the defences of his parent club.

This match would also prove the final game in Mo Agoro’s record run of tries in 12 consecutive matches for the club, breaking the record for the second time in the year after Charlie Graham away at Cornwall.

The bye week allowed a much-needed break heading into the toughest of run-ins that brought with it the toughest game of the season.

It appeared as if the boys would lose their unbeaten streak as Swinton Lions raced into a 20-2 lead shortly before half-time.

A Charlie Graham try just before the interval changed the momentum of the afternoon, with Kyle Trout’s try midway through the second half completing a sensational turnaround.

Promotion was all but secured in our last home fixture, demolition of local rivals Hunslet was a sweet way to get to the line.

Alix Stephenson coming of age with a superb hat-trick on an afternoon that set-up the scenes that followed in South Yorkshire last Sunday.

Despite losing two players to head injuries, Rhys Lovegrove described it as one of the most perfect performances he has been involved with during his three years as Head Coach.

And the team performance in the 48-18 was just the tonic to see us over the line and secure the title, promotion to the Championship after an eight-year absence.

Onto the final home game. A day that will live long in the memory and go down with history.

Being down to the bare bones, Keenan Dyer-Dixon was given his debut, but a patched-up Keighley side still scored a half century of points to crown their achievement in style against the North Wales Crusaders.

The final day of the season brought with it immortality as they became only the third team in history to complete a perfect league campaign.

Despite only being able to name 14 players, Rochdale Hornets brought it to the Cougars, but a team inspired by its youthful left edge emerged victorious to cement themselves as invincibles.

20 wins from 20 and the best defensive side of the summer era.